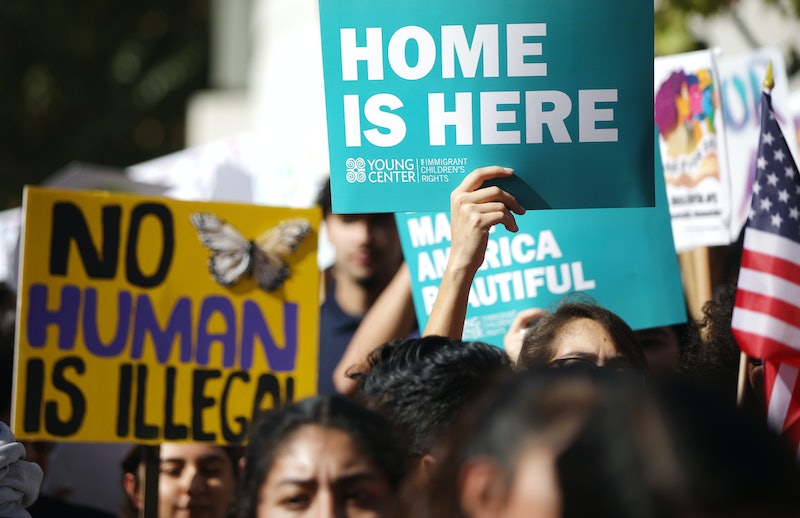 The Supreme Court is in the midst of deciding whether or not the Trump Administration can end the Deferred Action for Childhood Arrivals (DACA) program that’s helped protect around 700,000 undocumented young immigrants from deportation since 2012. While transcripts from arguments heard on Nov. 12 show that the Republican-majority justices may be leaning in favor of Trump, DACA recipients are facing uncertainty by preparing for the worst.

“What's giving me hope is knowing that we have undocumented people in this country with no legal status, no driver's license, that leave their homes every day and they go out there and find a way to make a living,” Iowa-based activist and DACA recipient Kenia Calderon, who started the Iowa DREAM Coalition to help educate and rally DACA recipients in the state, tells Bustle.

The Supreme Court is working to determine whether the Department of Homeland Security’s decision “to wind down the DACA policy” was within the law. DHS announced that it would “wind down” the program and stop accepting new applicants in 2017, the first year of Trump’s presidency. Almost immediately, district court judges in San Francisco, Washington D.C., and New York ordered that DACA continue. Contest in these lower courts is what helped bring the DACA question to the Supreme Court. Calderon tells Bustle that even though the announcement was painful, it didn’t surprise her, as she had been expecting bad news surrounding her DACA status since Trump took office. “I mentally prepared myself,” she says.

Though early reports are speculating that the Supreme Court will ultimately allow Trump to continue his plan to terminate DACA for good, the process leading up to Tuesday’s arguments reignited Calderon’s work in her community. She decided a few months ago jump back into activism, after taking a break from organizing after the election, feeling “defeated” as a result of its outcome. “As the date approached of the Supreme Court, I just basically said, f*ck it,” Calderon jokes.

A month before the hearings, she organized an information session in Des Moines, Iowa, that was attended by around 40 DACA and Temporary Protected Status (TPS) recipients to help them prepare for what the Supreme Court’s decision might bring. She says, in her case, educating herself and preparing for the worst had helped her cope with Trump’s anti-immigration policies.

On Nov. 12, the day of the hearing, Calderon and the Iowa DREAM Coalition held a rally to raise awareness on the realities of life for Dreamers, emphasizing how, for many of them, the United States is the only home they’ve ever known. Calderon says she was pleasantly surprised not only by the turnout, but because representatives from the Julián Castro, Bernie Sanders, and Elizabeth Warren campaigns came to show their support for DACA recipients.

According to former President Barack Obama, DACA was always meant to be a temporary solution for the thousands of young people who were brought to the United States as children, and have been in the country for most of their lives. “This is a temporary stopgap measure that lets us focus our resources wisely while giving a degree of relief and hope to talented, driven, patriotic young people,” the former president said in 2012. Congress had blocked the Obama administration’s efforts to create a clear and legal pathway toward citizenship for childhood arrivals.

As the fate of DACA hangs in limbo, Calderon says the best thing recipients can do right now is to prepare themselves for every outcome. “The very first thing they need to look at their expiration date and seek legal advice to see if they can renew one more time,” Calderon advises other DACA recipients.

Apart from being legally prepared, Calderon stresses that both DACA and TPS recipients should mentally and emotionally prepare themselves. “There is nothing worse than not preparing ourselves to hear really bad news about your life,” she says.

If the Supreme Court decides to uphold the Trump administration’s plan to terminate the program, DACA recipients will lose their protected status and may face deportation, though Obama and Trump have each stated that they would not deport those who are eligible for the program, according to Chief Justice John G. Roberts Jr. (via The New York Times). If SCOTUS decides the Trump administration’s wind-down decision wasn’t appropriate, however, DACA recipients may be able to renew their status, at least until a long-term solution is found.

“If, for some reason, the program gets terminated, I know I'm going to be OK,” Calderon tells Bustle. “Things are going to change drastically in my life, but I know that other undocumented folks have been able to figure it out and be creative, and that I can do the same.”

More like this
What The UK Blocking Scotland’s Gender Recognition Bill Means
By Sam Ramsden
8 Charities To Donate To During Black History Month
By Alexis Morillo
The UK Government Is *Finally* Banning Conversion Therapy
By Sophie McEvoy
Watch Jacinda Arden’s Devastatingly Honest Resignation Speech
By Sam Ramsden
Get Even More From Bustle — Sign Up For The Newsletter
From hair trends to relationship advice, our daily newsletter has everything you need to sound like a person who’s on TikTok, even if you aren’t.