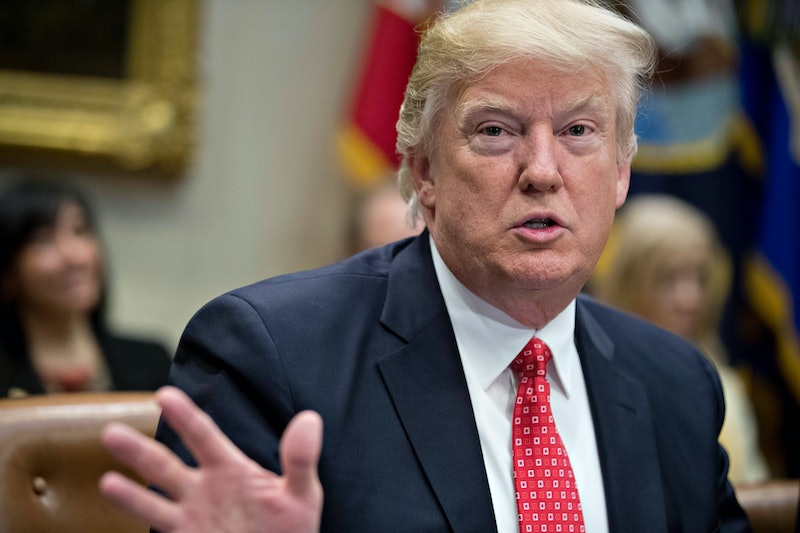 During oral arguments in April, there seemed to be very little agreement among the justices on President Trump's travel ban that banned the citizens seven majority-Muslim countries. On Tuesday, they made a final decision and came down 5-4 on the side of the Trump administration, with the Supreme Court deciding Trump's travel ban falls "squarely within the scope of Presidential authority."

The lawyer for the administration had argued that the president's statements against Muslims on the campaign trail shouldn't be taken into consideration. Solicitor General Noel Francisco also told the court that Trump's ban would have been an ineffective Muslim ban, given that only some Muslim-majority countries were covered. "This is not a so-called ‘Muslim ban.’ If it were, it would be the most ineffective Muslim ban that one could possibly imagine," he said in April.

The majority, five justices appointed by Republicans, supported that argument. According to SCOTUS blog, the Court mentioned the evidence about Trump's potential motivations (i.e. his anti-Muslim statements). "The issue before us is not whether to denounce the statements," the Court said in an opinion issued by Chief Justice John Roberts. "It is instead the significance of those statements in reviewing a Presidential directive, neutral on its face, addressing a matter within the core of executive responsibility."

The Court said it will "uphold the policy so long as it can reasonably be understood to result from a justification independent of unconstitutional grounds."

The Supreme Court further explained its decision, stating that Trump's ban was based on "legitimate purposes" and "set forth a sufficient national security justification." It also pointed to the fact that Iraq, which is a majority Muslim country, was not included in the ban.

Back at the April oral arguments, the lawyer arguing against the ban, Neal Katyal, told the court that Trump could have taken back any of his anti-Muslim statements from the campaign but chose not to. He also argued that the ban was at odds with the Immigration and Nationality Act. "I just want to make very clear the consequences of (the Trump administration) position for the INA is that the President can take a wrecking ball to the statute," Katyal argued.

The court's more liberal justices opposed the ban. Justices Stephen Breyer, Elena Kagan, Sonia Sotomayor, and Ruth Bader Ginsburg, all dissented, some focusing on the anti-Islam bias and others noting the issue of presidential power.

"What the unrebutted evidence actually shows is that a reasonable observer would conclude, quite easily, that the primary purpose and function of the Proclamation is to disfavor Islam by banning Muslims from entering our country," Justice Sotomayor wrote in her dissent.

The findings of three justices, Clarence Thomas, Samuel Alito and Neil Gorsuch, were never really in doubt. Last June, those three ruled that they would have let Trump's entire travel ban stay in effect while SCOTUS considered the case. The other six justices all required a carveout for people with family connections in the United States that remained in effect until Tuesday's decision came down.

The White House later released an official statement that read, "This ruling is also a moment of profound vindication following months of hysterical commentary from the media and Democratic politicians who refuse to do what it takes to secure our border and our country. As long as I am President, I will defend the sovereignty, safety, and security of the American People, and fight for an immigration system that serves the national interests of the United States and its citizens. Our country will always be safe, secure, and protected on my watch."