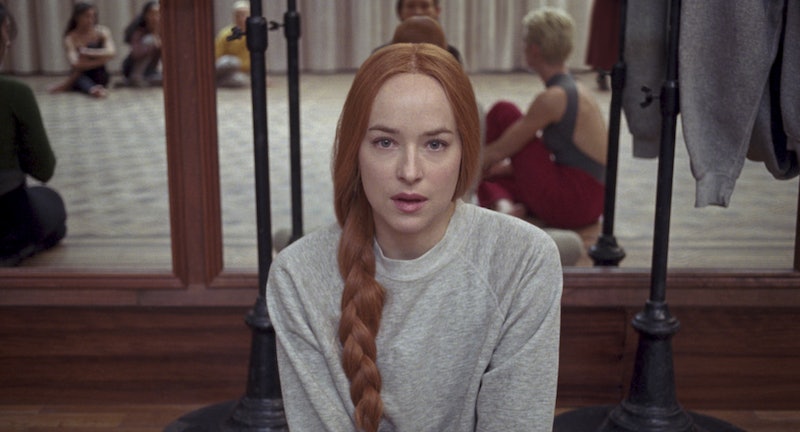 If you love horror movies, then you're probably already familiar with the 1977 Italian film Suspiria, which has now been re-made for 2018 by Call Me By Your Name director Luca Guadagnino. The new movie hits theaters in select cities in time for Halloween, but it will be released everywhere on Nov. 2, which means that your spook-fest could be getting an extension past October. The wait will be worth it though, as will the wait in the theater for the Suspiria post-credits scene, because it'll make you question everything about the movie that you just watched. Major spoilers ahead.

The post-credits scene in 2018's Suspiria happens at the very end of the credits, so don't think that the long wait means the movie really ended when the credits rolled. But you also won't get any new information in the post-credits scene as Marvel fans are privy to. Instead the post-credits scene features Susie (Dakota Johnson) reappearing and then reaching out to the camera as if caressing you — the viewer's — face. That caress is how Susie (revealed to actually be Mother Suspiriorum) erased the memory of Dr. Jozef Klemperer (Tilda Swinton), and controls her fellow dancers.

For a split second, you might just forget that it's a movie and wonder if Susie used her demonic powers on you to erase the whole movie you just watched from your memory. Then you'll probably think back to all the disturbing images from the movie, like Olga's (Elena Fokina) body breaking with each dance move that Susie performed earlier in the movie. Yeah, those memories are not going anywhere, which may be why Suspiria is such a great horror movie.

Part of what makes Suspiria so terrifying is the way that it surprises audiences with constantly changing identities. Susie starts off as a seemingly harmless American girl who goes to a dance school in Berlin, Germany in 1977. But it takes a while for you to be sure if Susie is in fact harmless or some demonic force, and that scene mentioned before which synchronized the character's dance moves to Olga's disturbing torture definitely leads audiences to question what that means. But you really don't find out until the end of the film after several other characters reveal that they have malevolent secret identities that nobody knew about.

While each of the hidden, insidious identities being revealed make the ending to 2018 Suspiria thoroughly freaky, the fact that Susie was able to erase Klemperer's memory in the last moments might be what stick to you while you're laying awake at night thinking about the movie. If you're wondering if that means a second movie with Susie and Klemperer could come out in the future — whether or not — you could be right, as Guadagnino told Deadline that he's open to directing a sequel or spin-off.

The post-credits scene in Suspiria definitely makes a sequel or spin-off possible, and Guadagnino explained to Deadline that he'd intended that the post-credits scene will leave audiences wanting more. "The character is looking forward towards something. I think it would be interesting to know what that is," the director said. You'll have to wait to see what happens next.