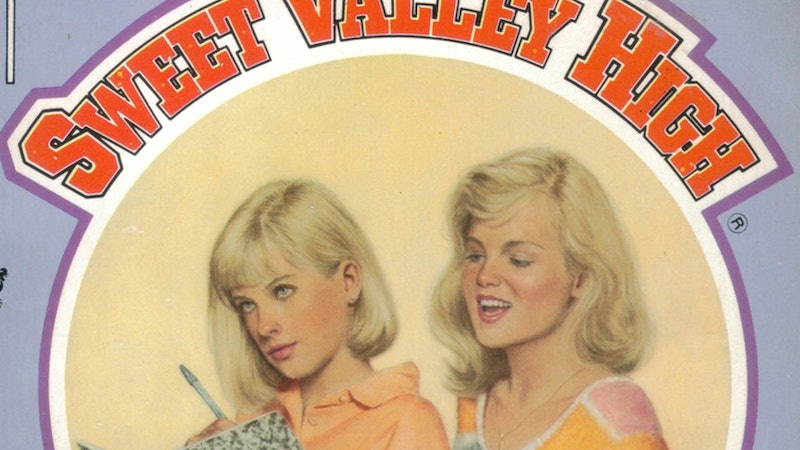 Fans of Francine Pascal's over-the-top, high-drama '80s YA series, Sweet Valley High are probably not surprised that road to producing a film adaptation has been... dramatic. Hollywood has been trying to make Pascal's Sweet Valley High into a movie since at least 2009, and finally there's some good news: According to Entertainment Weekly, Paramount has hired Emmy-winning writer Jessica Gao, best known for her work on the Cartoon Network animated series Rick & Morty and HBO's Silicon Valley, to write the script.

Gao is the latest in a string of writers who have been tapped to screen write the adaptation. A decade ago, Juno screenwriter Diablo Cody was first picked by Universal to write the film, and after that deal lapsed, Paramount hired Legally Blonde's Kirsten “Kiwi” Smith and The Mick's Harper Dill in 2017. Now, the reins have been handed to another writer who specializes in comedy, which matches perfectly with the kitsch of the books.

The Sweet Valley High novels were published between 1983 and 2003. In those 20 years, Pascal and a team of ghostwriters produced 181 books, which sold 150 million copies worldwide. The series follows twin sisters Jessica and Elizabeth Wakefield, who live in the fictional California town of Sweet Valley. The stories center on the blonde, blue-green-eyed, glowing-skinned duo — Elizabeth, sweet and studious; Jessica, ruthless and boy-crazy — as they compete for everything from dates to sorority admissions.

In an undated interview with Penguin Random House, Pascal, now 81-years-old, said that her intention for Sweet Valley High was to bring soap opera-levels of drama to readers. She said:

"I originally planned to sell the idea for a daytime drama featuring teenage characters to television networks, until a friend suggested that a book series, rather than a television series, might be the best way to fully develop the fictitious Southern California town of Sweet Valley. The rest is publishing history."

Pascal's original vision was eventually realized, when the series was turned into a television show in 1994. It ran for four seasons, totaling 88 episodes. The progress of the movie is still unknown, but the announcement of a new screenwriter is great news for fans who have wanted to see the Wakefields on the big screen for decades.

No word yet on whether Elizabeth’s romance with a werewolf or the evil twins will make their way into the plot, but hopefully the movie will be worth the wait.

More like this
Read The First Pages Of Emma Rosenblum’s Highly Anticipated Debut, 'Bad Summer People'
By Samantha Leach
This Episode 6 Moment Foreshadows Viserys' Fate On 'House Of The Dragon'
By Grace Wehniainen
Ling Ma Is Back — This Time, With Yetis
By Kate Dwyer
Romance Authors Are Mobilizing For Reproductive Rights
By Natalia Perez-Gonzalez
Get Even More From Bustle — Sign Up For The Newsletter