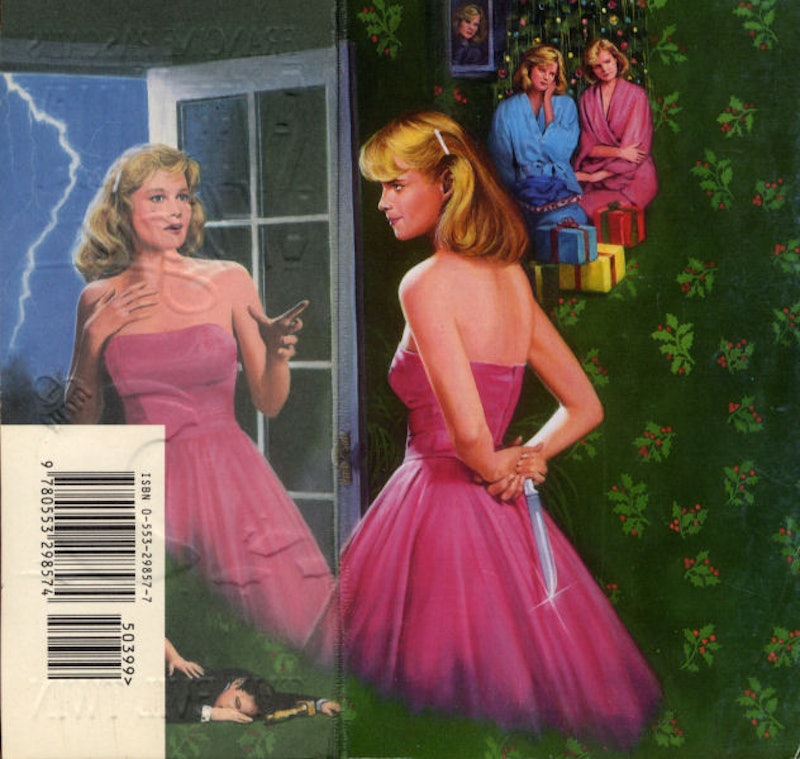 It’s been over two decades since I first picked up my first Sweet Valley High book, but I can still recite the description of the Wakefield twins by heart. Francine Pascal’s popular YA fiction series of the ‘80s and ‘90s contained hundreds of books centered around the beautiful identical twins of Sweet Valley, Jessica and Elizabeth Wakefield. Each book began in exactly the same manner — by introducing the reader to the protagonists, just in case it was their first time visiting the fantastical Californian town. It was crucial, it seems, for Sweet Valley High's audience to know that Jessica and Elizabeth both had "sun-streaked blonde hair," "peaches and cream skin," "blue-green eyes the color of the ocean," and that they were, of course, a "perfect size six."

Of course, that was where the similarities ended. Jessica was the fun-loving, risk-taking twin, whose habits included shopping, cheerleading, and maintaining her status as the most popular girl in school. By contrast, Elizabeth was studious, reserved, and careful, although avid readers will remember plenty of her own rebellious moments. (Motorcycles and Bruce Patman, anyone?)

As a preteen, I consumed these books like water, fluctuating between identifying with each twin. One day, I’d be Jessica. I’d leave my hair down, wear sparkly lavender eyeshadow, doodle notes during class with purple milky gel pens. The next day, I’d be more like Elizabeth. My hair would be in a ponytail, and I’d spend hours reading or writing in my journal. Because the twins were two sides of a coin, it was easy to find pieces of both of them within myself; I wasn’t entirely Jessica or entirely Elizabeth — no one is.

The Sweet Valley series was filled with an array of incredulous storylines ranging from Elizabeth’s romance with a werewolf (Jessica also dated a vampire at one point) to the twins nannying for a royal family in France. But none of these stories hold a candle to what is arguably the most out-of-control, bananas, bizarre plotline of all time: the double doppelgänger murder plot from The Evil Twin and its sequel, Return of the Evil Twin.

Because the twins were two sides of a coin, it was easy to find pieces of both of them within myself; I wasn’t entirely Jessica or entirely Elizabeth — no one is.

The Evil Twin was the final book in a SVH mini-series that introduced readers to a brand-new character named Margo Chapelle — a teenage girl with a traumatic past who happens to bear an uncanny resemblance to Jessica and Elizabeth Wakefield. Margo feels cheated out of her own life, and when she learns of the existence of the Wakefield twins, she decides that, obviously, she must kill one of them and take over their life.

But the story wasn’t done there. Margo’s plot is ultimately thwarted at the end of The Evil Twin, leading the Wakefield twins to believe that she is dead. But, several books later, readers were blessed with The Return of the Evil Twin, where it’s revealed that Margo not only survived her injuries — it turns out that she has a twin as well. Enter Nora, who is just like Margo but even more twisted. Together, they decide to carry out Margo’s original plot, but this time, they both plan on becoming the Wakefield sisters. If only they could agree upon which sister will be which.

Perhaps the most incredulous (and therefore the most memorable) detail of these wild “magna editions” is the moment in which Nora actually does commit murder. After having a fight with Margo and going rogue, she creeps into Jessica’s room at night, finding her lying blissfully in bed wearing a Sweet Valley sweatshirt. “You’re sweet all right,” Nora says, before stabbing her multiple times in the chest.

Together, they decide to carry out Margo’s original plot, but this time, they both plan on becoming the Wakefield sisters. If only they could agree upon which sister will be which.

But Nora forgot to think a lot of things through, ruining the entire "I’m going to take over your life after I kill you" part. Most notably, she didn’t check to see if anyone else was home — and it turns out that Elizabeth was sleeping just down the hall. Naturally, Elizabeth had a dream that Jessica was crying out for help (AKA their “twin intuition” as they call it throughout the series) and she flies into the room, spotting Nora as she climbed out the window.

After Nora escapes the Wakefield house, she’s momentarily shaken before deciding, “NBD, I’ll just become the other twin.” She goes back to her hotel, calmly washes her face, and pulls her dyed blonde hair into barrettes, Elizabeth’s signature accessory. "Jessica’s place in the family is permanently filled," Nora thinks to herself. "The only spot left is Elizabeth’s, boring or not." Casual.

For any readers who might have thought for a second that Jessica was actually dead, an important clue was given. After Nora stabs Jessica in the chest, she catches a whiff of magnolias — a smell that happens to follow Margo around throughout the series. Yes, Nora accidentally stabbed her own sister, thinking she was Jessica.

To say that I still have several questions about these books would be an understatement. I think about them multiple times a week. Why was Margo’s first inclination that she must kill one of the Wakefield sisters and become her? Wouldn’t she be more curious just to meet her, and find out why they look so much alike? Was their resemblance seriously that identical that Margo and Nora were able to fool Jessica and Elizabeth’s friends, family, and significant others? It’s far-fetched enough that Jessica and Elizabeth managed to pull off at least three dozen "twin switches" throughout the duration of the series (many of which included making out with the other one’s boyfriend), but these total strangers? Who, in actuality, had no relation to the Wakefield twins at all? How did anyone believe this?

To say that I still have several questions about these books would be an understatement. I think about them multiple times a week. Why was Margo’s first inclination that she must kill one of the Wakefield sisters and become her?

But believe it readers did, and I’m not the only one still marveling at how blissfully weird these books were. Samantha, 31, tells Bustle that of all the SVH books, none of them stood out to her the way the Evil Twin mini-series did. "They didn’t even have the same hair color," she says, noting that Margo and Nora were both brunettes and dyed their hair to match the Wakefield twins’ blonde shade. "And didn’t they get color contacts too?" (They did.) "OK, there’s no way no one would be able to tell it wasn’t Jess or Liz. You can totally tell when someone is wearing color contacts. I didn’t think twice of it at the time, though."

Roberta, 32, feels similarly. “It’s such a small community, too,” she tells Bustle of the fictional Sweet Valley. "It’s like Margo and Nora were hiding in plain sight."

But for Roberta, who started reading the books when she was in elementary school, the ability to suspend belief was one of the key components of being a SVH fan — and what made the series so much fun. “It was like having a mirror,” she says. “Well, a fuzzy mirror. I was going through all the same mundane situations in my life, like going to class, or a school dance. And then it was like, here’s all this weird shit happening in Sweet Valley that could also be potentially happening to me. It was fun to leave the mundane parts of my own life behind and step into this alternate reality.”

“It was like having a mirror,” she says. “Well, a fuzzy mirror. I was going through all the same mundane situations in my life, like going to class, or a school dance. And then it was like, here’s all this weird shit happening in Sweet Valley that could also be potentially happening to me.

And it wasn't just readers who noticed the appeal of Sweet Valley's "alternate reality," as Roberta put it. Amy Boesky, PhD, who was a principal ghostwriter for the series for six years (though she did not work on The Evil Twin or Return of The Evil Twin), described that very phenomenon in a 2013 essay for Kenyon Review. “After almost a decade of new realism offered to teen readers by Judy Blume...” Boesky wrote, “Sweet Valley High offered a pastel, romantic antidote: a world of action instead of contemplation, a world in which bodies were seen soft-focus, free of the slightest blemish.” Boesky, who shared the pen name Kate William with other ghostwriters, went on to say that the characters of Sweet Valley lived in “a fantasy world,” noting that the series itself “went right to the core of adolescent identity — the same/different axis around which so much yearning and affiliation spin themselves out, one generation after another.”

Interestingly enough, the details that drew so many readers to the SVH franchise were the same details that drew Margo and Nora to the Wakefield twins. I can remember "playing" Sweet Valley with my friends in third grade, fighting over who would be Jessica that day, the same way Margo and Nora bickered about which of them would assume the identity of the more fun-loving Wakefield twin. And when you think of that way, Margo and Nora’s plan seems less unfathomable and, well, almost relatable.

After all, that’s why I came back, book after book. The Sweet Valley High series offered a world where almost anything was possible, where decisions bore no consequences, and where, most of all, readers could see themselves so clearly in those picture-perfect twins. Jessica and Elizabeth, with their respective extreme personalities, were like no one I knew in real life — and simultaneously, they were just like me. It’s why a generation of young readers devoured hundreds of books, no matter how incredulous. It’s why me and other readers suspended belief every time, going along with whatever adventure the Wakefield twins were embarking upon that minute. I'd be lying if I said I didn’t love every minute of it. I’d be lying if I said I didn’t want to become them, too.