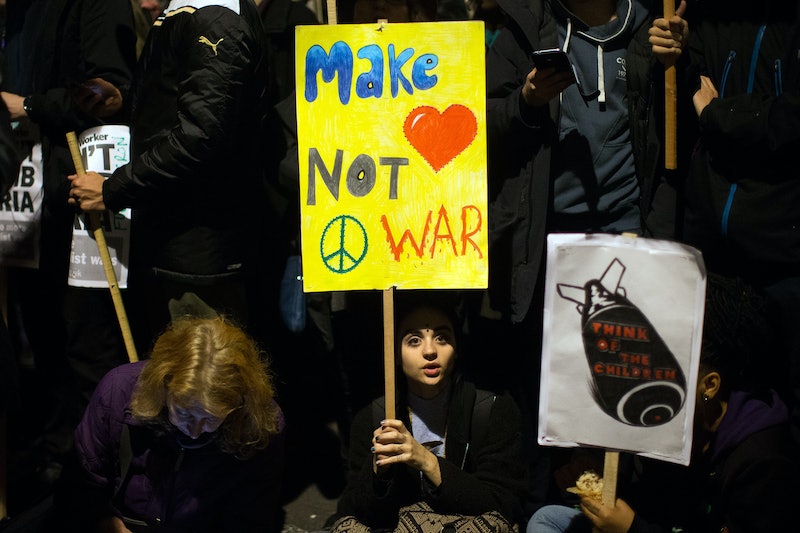 On Thursday, President Trump committed an act of military aggression against Syrian President Bashar al-Assad's regime by launching airstrikes in Syria. This development can be frightening for many Americans who are worried that this may escalate U.S. involvement in the region and potentially start a war between the United States and Syria. What makes this event even more chilling is the fact that the airstrikes in Syria occurred on the same day as the centennial anniversary of U.S. involvement in WWI.

On April 6, 1917, the United States declared war on Germany and officially entered WWI. Although the United States had made an effort to stay out of the conflict that had up to that point mostly been between European countries, President Woodrow Wilson responded to German provocation by sending U.S. troops to France to begin training for what would become one of the bloodiest wars in history.

Today, exactly 100 years after the United States became involved in the international war, the American government directly involved itself in the ongoing Syrian conflict by directing over 50 Tomahawk missiles at an air base in Syria. This was not in response to any aggression directed at the United States, but was instead a response to a chemical attack, allegedly carried out by the Assad regime, that killed over 70 civilians earlier this week. ‌Assad still denied playing any role in the attacks.

Many Americans are rightfully fearful that this attack could potentially have long-lasting consequences for the country, especially since Secretary of State Rex Tillerson may have hinted that the United States will consider sending ground troops to Syria if necessary.

Becoming militarily involved in such a complex political issue, especially without having been directly attacked first, will of course have a major impact on U.S. military and national security. Similar to the circumstances at the advent of WWI, the Syrian conflict also involves a range of international alliances and disagreements. For example, the Russian government is currently supporting the Assad regime in Syria to defeat ISIS rebels in the country, while the United States, at least in the Obama-era, supports Syrian rebels who want to oust Assad, while also attempting to fight ISIS.

It's understandable that concerned citizens who disagree with Trump's decision will draw comparisons between today's events and the events of 100 years ago and become fearful of a potential third world war. But the great thing about history is that we have the potential to learn from past mistakes to ensure that the same atrocities don't happen again.

At WWI centennial anniversary memorial events across the country on Thursday, thousands gathered to pay homage to the lives that were lost in the war, and to reflect on how it shaped American history, for better or worse. One Army Chief of Staff, Gen. Mark Milley, made a statement at a ceremony at the Pentagon:

I think all of us, especially here in the Pentagon, need to take time and reflect. I think we owe it to 5 million Americans and those 4 million soldiers that wore the uniform of our nation. We owe it to every one of them. Even though none of them are alive today, we owe it to all of them to clearly and unambiguously understand what World War I was about, how it started and vow, vow upon their graves to never let it happen again.

Hopefully, America's politicians will take these words to heart.