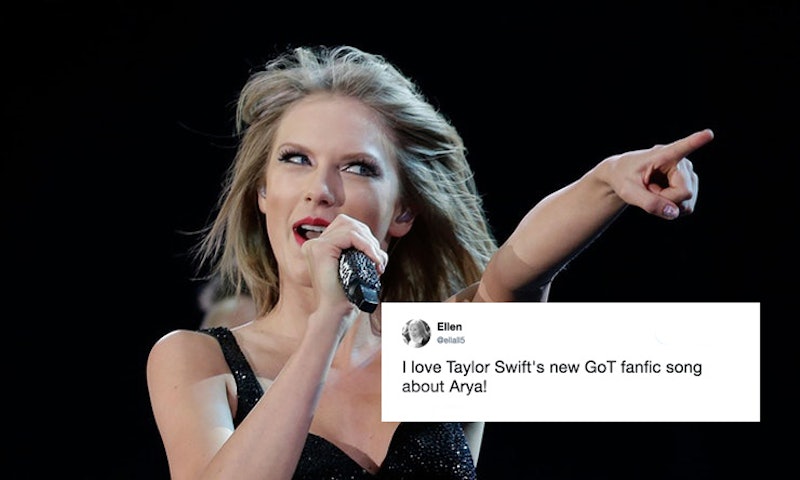 If you're plugged in to the two major entertainment forces of our time, Game Of Thrones and a certain blonde singer from Pennsylvania, then you might have felt a shudder of recognition on listening to "Look What You Made Me Do." Maybe you, like so many other people, think that Taylor Swift is copying Game of Thrones' Arya Stark in her latest single.

One of the most memorable moments in a GoT season jampacked with them was Arya literally wearing Walder Frey's skin in order to massacre his followers and strike their names off her revenge list in the premiere. As such, the T. Swift line, "I’ve got a list of names and yours is in red underlined. I check it once, then I check it twice, oh," feels very murdery Arya indeed. Add to that both women's ability to evade death, with Swift claiming "I rose up from the dead, I do it all the time." It's no wonder Twitter is alive to the parallels that can be drawn between these two pop culture icons. And yet, people do not seem to be digging the 27-year-old mirroring the youngest Stark sister. Maybe it's just that Swift's reputation has suffered a few knocks post Kimye scandal, while despite her thirst for blood, Arya Stark is one of the fan favorites on the fantasy show. In any case, some folks are outraged on behalf of George R.R. Martin for Tay and Arya's seeming parallels.

Fans Were Upset About Character Development

Meanwhile, Taylor is exactly who she's always been?

Some Were Outraged Because They Didn't Like The Song

The annoyance here seems to be about quality, or lack thereof.

But Also Maybe The Song Isn't About Arya At All?

After all, it doesn't have to be about Arya. It could be about another famous list keeper (Santa). Or heck, maybe it's an Arya song about Swift, not vice versa. She does know how to steal faces.

The Song Is Inspiring Twitter To Arya Stark Levels Of Savagery

A girl has no time for Swift, but a girl always has time to savage people who try and construct parallels between themselves and the fiercest woman in Westeros.

Folks Are Getting The Tiniest Bit Paranoid

Which is totally fair. The promo video was a damn serpent — clearly the blonde is not playing around.

Whatever way you slice it, people have a lot of feelings about the comparison. But it isn't like this parallel came out of nowhere. Even way back in 2014, Swift was daydreaming about being an assassin in her video for "Bad Blood" — this just gives the same occupation a very 2017 TV spin.