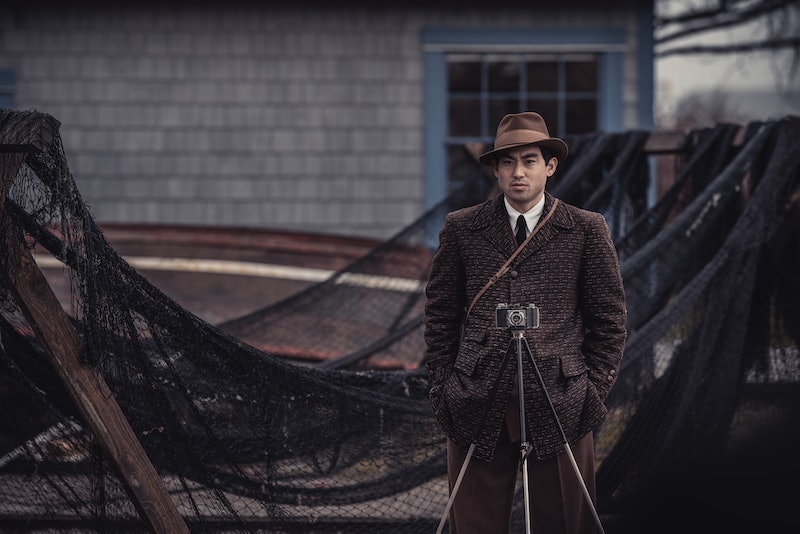 The Terror is back on AMC with a new story that's sure to keep you up at night. The Terror Season 1 took a real tragedy, the lost expedition of the HMS Terror, and added horror and science fiction elements in the form of a sea monster. Season 2 adds a dash of magical realism and a mysterious monster to the already harrowing experience of Japanese American internment in the U.S. between 1942 and 1945. In tribute to the real losses of the time, most of the new cast and crew for The Terror: Infamy are Asian American and have some connection to the time period.

According to the official AMC description of the series, "The Terror: Infamy centers on a series of bizarre deaths that haunt a Japanese American community, and a young man’s journey to understand and combat the malevolent entity responsible." That community is located on Terminal Island off the coast of Los Angeles. After the attacks on Pearl Harbor, the Japanese Americans living there really were evacuated and relocated to camps.

George Takei, a lead on the show, was interned with his family when he was 5-years-old. Derek Mio, who plays Chester Nakayama, on the show, also has a personal connection to the subject matter — his grandfather was interned at the time. Mio told TV Insider, "It's an interesting way to tell this story — the parallels of the terror of what happened in this historical context with the terror that is haunting these characters. Chester is facing supernatural demons and real-world ones: the war, the government, and his struggle with what he should do and who he is."

Here are the rest of the Infamy cast.

The executive producer plays Nobuhiro Yamato, who according to AMC is "one of the first Japanese Americans to move to Terminal Island as a fisherman, the stories of his former glory live on through his current role — serving as the salty raconteur and honorary officer of Henry’s ship."

Takei, who has spoken out about being sent to an internment camp as a child, is the perfect artist to lead this series and this new cast to tell this important story.

You know Mio as Wade from Greek. He also played Glenn Cho in the cult comedy GBF. On The Terror: Infamy he is our protagonist. The season follows him and his family as they navigate this harrowing period.

According to the official character description, "Chester finds himself caught between the insular Japanese community of his upbringing and his life an as all-American 22-year-old. He’s a proud, stubborn young man who hopes to one day leave his “tiny island” and travel the country as a photographer for LIFE Magazine."

Sukezane starred in Heroes: Reborn as Miko Otomo, and has recently been seen in Westworld and the Netflix reboot of Lost in Space.

Her character is deliberately mysterious, it seems. "There’s not much to say about Yuko Tanabe," according to AMC, "not much that we know at least. But her role is central in the fate of Chester and the rest of the Terminal Islanders."

Rodlo is a telenovela star known for playing Isabel Urrutia Zavaleta on Vuelve Temprano, as well as shows like 2091, El Vato, and the mini-series Too Old To Die Young.

On The Terror, Luz is a Mexican American community college student and Chester's girlfriend. Before meeting him, she was intent on joining a convent after graduating.

Usami is a working actor you may recognize from The Wolverine, Unbroken, and Red Dog. He also does a lot of theatre in Australia.

On The Terror, Usami plays Chester's father. "Though he would say he’s 'just a simple fisherman,' Henry, one of only six Japanese Americans from the community to own a car, is a popular figure on Terminal Island."

Chester's mother is played by Mori, who you know from British television obsessions like Torchwood and Absolutely Fabulous.

Asako and Henry had an arranged marriage on The Terror. According to AMC, "Asako deeply respects the traditions of Japanese culture, but with that reverence comes a bent toward superstition."

Ishikawa is a former child actor/performer (remember T-Squad) who you may recognize from Zoey 101 as well as Yours, Mine, and Ours.

AMC says that the new series tells the "overlooked story of Japanese American internment and asks what it truly means to be an American." The all-star cast, alongside Takei, seem ready to take that hefty mission on.