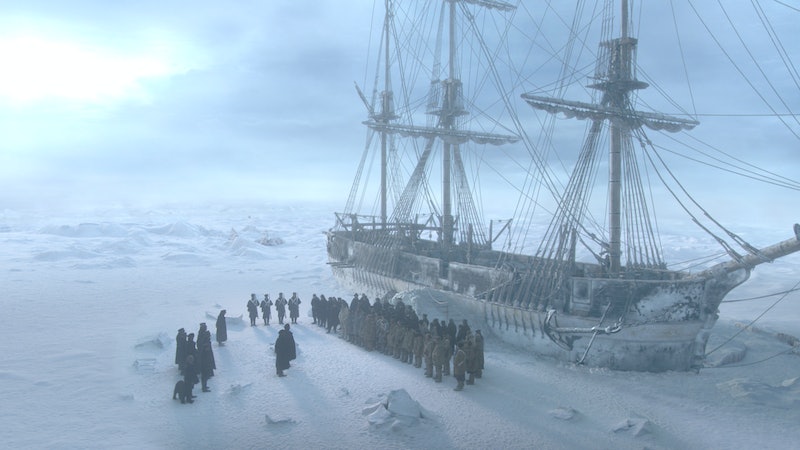 The British Royal Navy has a nearly 500-year history, but one of the most fascinating — and terrifying — journeys ever made was Franklin's lost Arctic expedition. The new AMC series The Terror is inspired by the true story of the failed exploration made by the HMS Erebus and HMS Terror. While learning about the history will inevitably give away some of the plot (after all, history has remembered it as a "lost" expedition), the series will still have some surprises. That's because the TV show is actually based on the novel The Terror by Dan Simmons — and Simmons' fiction book definitely strays from the truth.

As the Encyclopaedia Britannica outlines, Captain Sir John Franklin led the ships the Erebus and the Terror from England on May 19, 1845, to the Northwest Passage in the Arctic. The two ships and the 129 officers and crew were last seen north of Baffin Island, the island that is between Greenland and mainland Canada, in July 1845 by British whalers. After that, they weren't heard of again. And it took 14 years and multiple search parties to discover some skeletons of the crew. That 1859 search also unearthed written accounts of the expedition up until April 25, 1848. Even without reading that written account, one can assume how (ahem) terrifying being stranded in the frozen waters of the Arctic — in the 1800s, no less — would be. And the trailer for The Terror definitely makes it seems like the Royal Navy should have had the foresight not to send such an ominously-named ship on this treacherous voyage.

The written account explains how they became trapped in the ice in September 1846. By April 1848, 24 men had died — including Sir Franklin. (Ciarán Hinds of Harry Potter And The Deathly Hallows: Part 2 and Game Of Thrones portrays Sir Franklin and leads the crew on this doomed journey in The Terror.) The remaining survivors decided to try to head south on foot and apparently resorted to cannibalism and all died as they trudged through the frozen landscape.

Executive producer Ridley Scott explained how thorough the production was when it came to the historical aspects in an interview with AMC. Although the writers did have to fill in some gaps when it came to what the crew experienced during this 170-year-old expedition. "When you do a historical project, you have to speculate and dramatize based on letters and reports. Whatever limited information you've got, that's where the truth starts to wrestle with fiction," Scott said. But beyond having to make assumptions, The Terror also takes a pretty big, non-factual leap. "The fiction side of the story is this monster," Scott said. So while the true history of the HMS Erebus and HMS Terror sounds dramatic enough, The Terror will take the fear factor up a notch, into the supernatural.

In previews, the crew appears to be tracked by a creature that seems more vicious than a bear. "Not a man, not a bear, then what?" Tobias Menzies' character asks. (The Outlander and Game Of Thrones actor portrays the cocky Captain James Fitzjames, who is a favorite of Sir Franklin.) Something hunting the crew is not based in any sort of historical fact, but rather, is a creation from Simmons, the author of The Terror book.

Yet, this supernatural aspect isn't completely off base, depending on your beliefs. The author of Ice Ghosts: The Epic Hunt For The Lost Franklin Expedition, Paul Watson, spoke to NPR in 2017 about the paranormal aspects of the Arctic. "The Arctic has something to tell us," Watson said. "And I'm getting perhaps a bit spiritual here, but the Inuit especially believe that there are spirits of their ancestors, there are spirits that live in the sea, that walk the land, and if you disrespect them, you will suffer greatly for it." Jared Harris (Mad Men, The Crown) as Francis Crozier, the captain of the HMS Terror, says, "This place wants us dead" in the series. And even with the help of Nive Nielsen's "Lady Silence," an Inuit who tries to assist the British men as they battle the elements and this supernatural creature, you can expect the outcome of The Terror to match the outcome of the real-life expedition.

It took until the 2010s for the two ships to be found with The Guardian reporting that the HMS Terror was just discovered mostly intact in 2016. But The Terror will give its own take on what exactly was the downfall of the 129 people who attempted to make their way through the Northwest Passage when it premieres on Monday, March 26. And while the story is intriguing even without sci-fi elements, AMC's series will certainly benefit from the added mystery.

More like this
'The Sandman’s Ending Is A Departure From Neil Gaiman’s Comic Book Series
By Kadin Burnett
‘The Simpsons’ Will *Finally* Address How They “Predict The Future”
By Sam Ramsden
'Bridgerton' Newbie Hannah Dodd Has Thoughts On Colin and Penelope’s Love Story
By Bustle UK
The 'PLL: Original Sin' Creators Say A’s Identity Will Be “Very Clear” By The Season Finale
By Alyssa Lapid
Get Even More From Bustle — Sign Up For The Newsletter