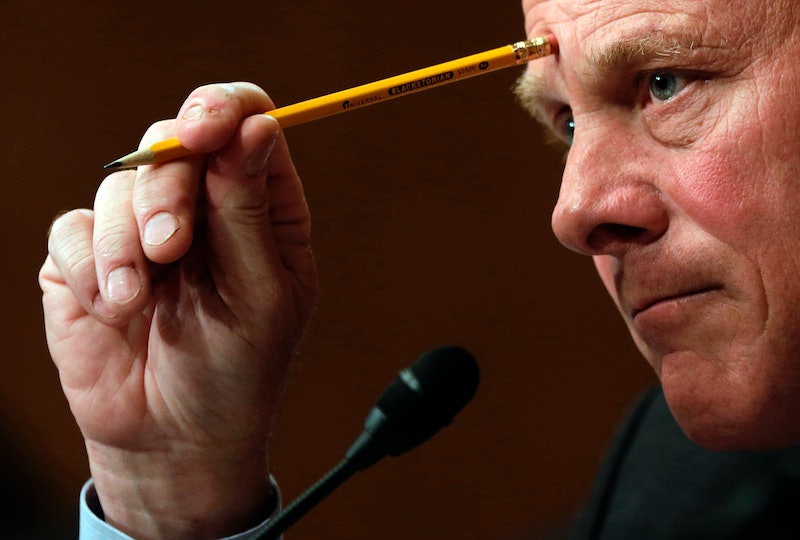 On Wednesday evening, Senator Richard Burr mentioned the "This Is Fine" meme at a Russian interference hearing and the internet naturally had a lot of thoughts about it. Burr said, "Some feel that we as a society are sitting in a burning room calmly drinking a cup of coffee, telling ourselves, 'This is fine.'" Burr smiled at his reference, then continued, "That’s not fine and that’s not the case." Given how rare it is for a senator to reference a pop culture meme in any scenario, let alone a Senate hearing, it was pretty much a done deal that the nation was going to notice.

The lawmaker added after his witty reference, "We should no longer be talking about if the Russians attempted to interfere with American society. They've been doing it since the days of the Soviet Union, and they're still doing it today."

The internet reaction to Burr's usage of the infamous meme of a dog sitting in a room that's lit on fire seemed to be a combination of flat out shock and frustration, given the Senator's history of not actually doing anything about Russian interference in the Senate. The meme has been used far and wide since it was created in 2013 by artist KC Green, and is most often used to describe people's emotions at being stuck or unable to escape awful or chaotic situations.

One Twitter user tweeted of Burr's usage, "Don't know which is worse, that he's right or that a U.S. Senator is using a meme as an example..."

Another pointed out that Burr had missed a Senate vote earlier in the day which was related to increased security for the 2018 midterms, tweeting, "Since you were absent @SenatorBurr, when the Senate voted today to protect our 2019 elections, one could surmise you peacefully enjoyed your steaming hot coffee far from the Senate floor."

Still, it was pretty fitting that Burr used a popular social media meme in a Senate hearing where social media experts testified on how Russia meddled with Twitter and Facebook during the 2016 election. This hearing comes a few days after Facebook announced that it had removed 22 pages and accounts across the Facebook and Instagram platforms upon revealing they were working to "spread disinformation."

Though it's up to debate whether Burr's meme quip was a welcome moment at the hearing, it's clear that most users are wondering when the senator is going to act on his beliefs, rather than simply talk about them. One user tweeted in response to his meme comment, "And yet @SenatorBurr abstained from a vote that would have appropriated $250 million to bolster election systems, replace outdated equipment, etc. I am so sick of GOP complicity."

Burr seemed to want to address this frustration in his opening speech for the hearing, though it wasn't given nearly the publicity of his meme quote. In his speech, Burr said,

Even now, almost two years after the 2016 election, foreign actors continue an aggressive and pervasive influence campaign against the United States...crafting an elegant policy solution that is effective but not overly burdensome demands good faith and partnership between social media companies and this Committee...We can't afford half measures, let alone doing nothing at all.