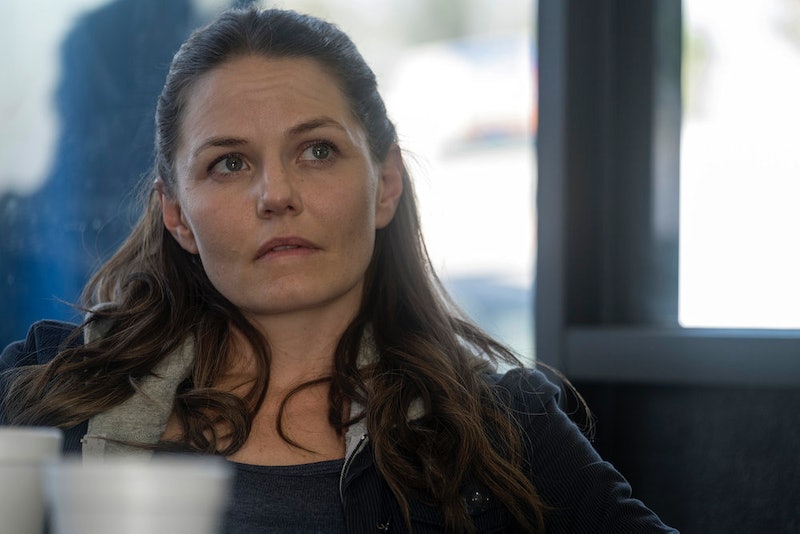 Given the number of times This Is Us has shaken fans to their core, it's not surprising that theories about Season 4 are already starting to pop up just a handful of episodes in, especially about the new characters. . There's one particular This Is Us theory about Cassidy that, despite its growing popularity, doesn't hold up as well as some people may think it does, thanks to one very important reason.

The theory centers around the idea that Cassidy is actually Uncle Nicky's daughter. At first, the prediction was mostly based on their first interaction when Nicky drunken threw a chair through the window of a veterans support group meeting Cassidy was attending at the time. The two of them locked eyes and many fans read Cassidy's shocked expression to signify that the two characters were connected on a much deeper level. That sentiment has only grown more with time, especially after last week's Oct. 15 episode when Nicky told Kevin about a woman he had once loved, named Sally.

She's the reason he had bought the trailer in the first place when he got back from Vietnam, in the hopes that they would live in it together and start a family. But when he went to visit her, she wasn't home and he never spoke to her again.

It's a heartbreaking story to be sure, but if you start to think about the details surrounding it, Cassidy's connection to it all begins to fall apart. For starters, if this series of events played out the way Nicky claims they did, that means Sally would've had to get pregnant prior to Nicky's deployment. He was drafted in 1970 and sent overseas shortly thereafter. This timeline presents a fundamental flaw in the Cassidy theory, given that the Big Three weren't born until 1980 after Jack returned home and began his romantic journey with Rebecca. That would mean that Cassidy would be around 10 years older than Kevin, which is clearly not the case.

When they first met, Cassidy insinuated that Kevin was too old to be friends with her 9-year-old son and made a general jab at his age, referring to him as a 40-year-old man. That seems to imply that she is actually younger than him, not older — and certainly nowhere close to being 50. This one vital point appears to close the case on the Nicky-Cassidy mystery once and for all.

That doesn't mean Nicky couldn't still have a child out there, though, even if it isn't Cassidy. During a recent interview with Entertainment Weekly, This Is Us showrunners Isaac Aptaker and Elizabeth Berger teased that Nicky would be getting a big storyline in the future that would help fans understand more about his past prior to the war.

“I think he had some happier times in the pre-Vietnam section of his life,” Aptaker explained to EW. “We actually have a story coming up down the line that I don’t want to say too much about, but it shows one of the best days in Nicky’s life. So he’s not all doom and gloom.” Perhaps these flashbacks will help clarify what really happened between Nicky and Sally once and for all.

Granted, it's always possible that Nicky wasn't telling Kevin the whole truth. Maybe he and Sally did reconnect after the war for a brief time, but it's still too painful for him to mention. But based on the information the show has provided up to this point, Cassidy and Nicky have a lot in common — military backgrounds, a gravitation toward alcohol — but shared DNA doesn't seem to be one of them.

More like this
Helena Bonham Carter Doesn't Think 'The Crown' “Should Carry On"
By Sam Ramsden
'The Last Of Us' Episode Schedule Competes With The Super Bowl & Oscars
By Brad Witter
Grammys Host Trevor Noah Made Adele's Dream Of Meeting The Rock Come True
By Brad Witter
Pedro Pascal Barely Got Through The "Lisa From Temecula" 'SNL' Sketch
By Stephanie Topacio Long
Get Even More From Bustle — Sign Up For The Newsletter
From hair trends to relationship advice, our daily newsletter has everything you need to sound like a person who’s on TikTok, even if you aren’t.