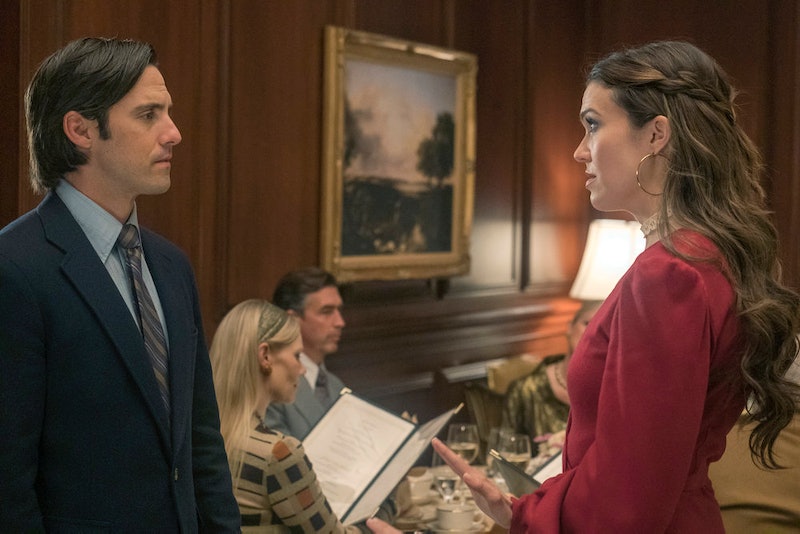 Despite all the various timelines that have been introduced throughout the last three seasons, every episode of This Is Us has shared one commonality: the Pearsons. However, Tuesday night's premiere barely involved any of the show's core cast members, instead choosing to focus on an array of new characters, including a grown up version of Kate and Toby's son. This adds a whole new level of complexity to the This Is Us Season 4 timeline in way that no one expected, and, quite understandably, people are already a little confused by it.

Prior to the start of the new season, the series had already established numerous points in time that viewers would check in with the Pearson clan. This included past versions of Jack and Rebecca from the early days of their relationship and marriage; the Big Three during their child, teen, and adult years, and even flash-forwards of a silver-haired Randall and his grown up daughter, Tess. The time hops have never been in short supply. Season 3 even ended with the revelation that the flash forwards were taking place near the end of Rebecca's life, who looked to be on her deathbed with all of her family gathered around her. But now, Season 4 has introduced a point even further into the future, showing the present-day Baby Jack as an adult who falls in love, gets married, and goes on to become a professional singer.

That's a lot of ground for one show to cover and can make follow each individual story a little confusing. Thankfully, series creator Dan Fogelman has taken the liberty of breaking down the new This Is Us timeline that has been established and clarifying how far into the future the series has taken us with this new twist.

In the present day timeline — which centers around the adult lives of the Big Three — Kate and Toby just welcomed their son into the world. However, Fogelman confirmed in an interview with Entertainment Tonight that the flash-forward about Rebecca takes place around 12 years later, when Kate and Toby's son is "in his teens or pre-teens." That's still a ways off from the Adult Jack viewers met in the Season 4 premiere. So how far away in this latest time jump, exactly? "What you're seeing is about 10 years-plus after [the Rebecca flash-forward]," Fogelman explained. That would put Adult Jack in his early-to-mid 20s.

As for the other new characters who came onto the scene throughout the extended hour, they appear to fall into already-established timelines. Jennifer Morrison's military vet character, Cassidy, shows up in the present-day timeline that coincides with Baby Jack's birth and Kevin's budding relationship with his uncle, Nicky, who was shown throwing a chair through the window of Cassidy's veteran’s support group meeting. Meanwhile, Asante Blackk's Malik is a teenage father who gets introduced to Deja at a barbecue shortly after Randall, Beth, and the kids move to Philly — once again in the present-day timeline.

After you break it down, the timelines are a little easier to keep track of, but knowing This Is Us, it'll find new twists and turns to throw our way as the weeks progress.

More like this
Neil Patrick Harris & David Burtka’s Relationship Status Is Far From ‘Uncoupled’
By Jake Viswanath
Netflix Just Revealed When 'Never Have I Ever' Seasons 3 Will Premiere
By Gretchen Smail and Alyssa Lapid
Does 'Locke & Key’s Ending Mean There Could Be A Season 4?
By Sophia Moore
‘The White Lotus’ Is Coming Back For Season 2 This Fall
By Bustle Editors
Get Even More From Bustle — Sign Up For The Newsletter