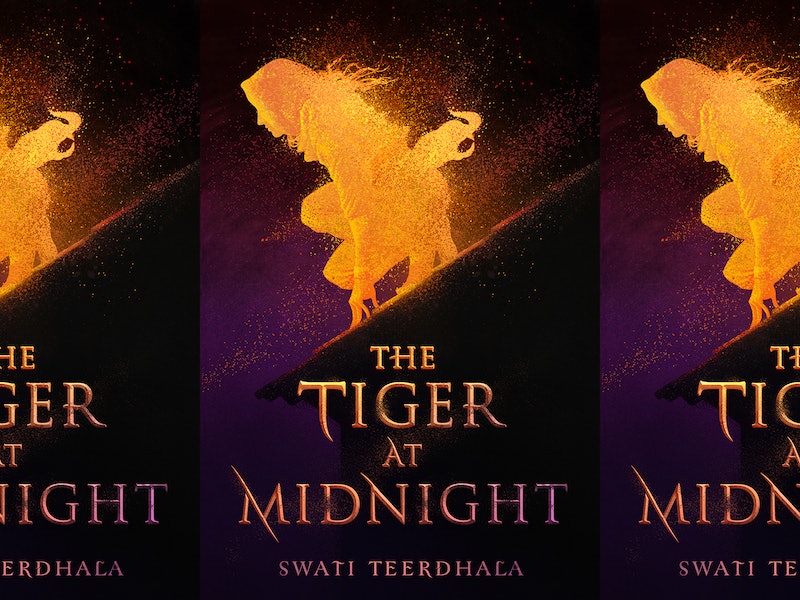 It may seem early, but it's officially time to start looking forward to 2019 releases. I know, it's a little bit overwhelming, but stay with me here. As a reader, there is nothing more exciting to me (besides, well, reading books, of course) than making a nice long TBR of upcoming books. If you feel the same way, and you've already started marking down some 2019 books you want to read, you're going to want to add Swati Teerdhala's YA fantasy The Tiger at Midnight to the list ASAP. Bustle has an excerpt for you to check out below!

Teerdhala's debut is a YA fantasy set in an ancient-Indian inspired world, complete with royal coups, rebel spies and blood-soaked thrones — which sounds like exactly the sort of book fans of Sabaa Tahir and Renee Ahdieh are going to want on their shelves. Here's the gist of the plot: Esha hates the soldiers of the Blood Fort, especially the ruthless General Hotha. Determined to avenge her family after the royal coup, she becomes a rebel spy known as the Viper. Her goal? Kill General Hotha and topple the Pretender King.

Kunal is the sole nephew of General Hotha, who put him on the path of a soldier 11 years ago. It’s a path of unquestioned obedience and loyalty to the Pretender King. When Esha’s mission puts her in Kunal's crosshairs, she expects to fight for her life. Instead, his unexpected kindness gives her opportunity to complete her mission. Except that the General is already dead and the Viper's been framed for the assassination. A game is already in play — but who's moving the pieces?

Of course, the book won't be hitting shelves until April 2019, so you've got a fair bit of time to wait until you can dive into this high-stakes fantasy world. But Bustle's got your back a first look at the incredible cover — illustrated by Michael Marsicano and designed by David Curtis at — and an excerpt below! Sure, you'll be on the edge of your seat for the next 10 months, but you'll love every minute of it, I promise.

The Tiger at Midnight by Swati Teerdhala, $19, Amazon

Kunal’s eyes, sharp as an eagle’s, were used to studying an enemy’s armor for chinks or a battle plan for flaws. But tonight they rested on the sea.

Across the water, the outline of the coast of Dharka looked as if it was etched into the night — a shadow of reality compared to the starkness of the rocky Jansan cliffs below. Kunal longed to sketch it, capture the shades of moonlight.

Chilly air tickled the stubble on his jaw as he sat, perched on the highest wall of the Red Fortress, with his curved longbow at his side. It had been many moons since he’d had a moment to close his eyes and feel the wind on his skin with such abandon. Terms for the cease-fire with the Dharkans had been drawn up that morning, so watch duty was a formality today, but not one he was about to shirk.

Kunal stared out into the sooty darkness, his eyes unfocused. No one would be out there on the abandoned battle lines either, the soldiers too busy celebrating the momentary peace with rice wine and games of dice.

Except — there was movement.

Kunal stared out into the sooty darkness, his eyes unfocused. No one would be out there on the abandoned battle lines either, the soldiers too busy celebrating the momentary peace with rice wine and games of dice. Except — there was movement.

He was up in a flash, peering out over the curved bell of the rampart’s window. A small figure weaved her way through the encampment on the western side of the Fort with delicate steps.

Moonlight highlighted her careful movements, the red sandstone of the Fort creating an eerie glow around her. Her ivory-colored uttariya covered her head and shoulders, but Kunal caught a glimpse of her face under the shifting streams of light.

He abandoned his warm corner of the wall.

Kunal would have left the girl to find her way back to the harbor down below the cliff, but she was going the wrong way. In a quarter of an hour the conch would be blown, and soldiers would stream out of the west entrance for midnight exercises — drunk and in fighting moods. Though the war elephants wouldn’t be out this late at night, it would still be chaos after tonight’s celebrations. A lost girl could easily get underfoot as they practiced their chariot formations.

He’d risk a whipping for abandoning his post, but Kunal’s stomach turned at the thought of anything happening to a civilian during his watch.

The girl disappeared under the towering shadow of the Fort, and Kunal raced from his perch to catch up. He ran down the tower stairs, nearly overturning a camphor lamp hanging from the ceiling as he shot through the narrow corridors. He reached the tall, stone arches at the bottom of the Fort and turned the corner at the side entrance, steadying his hands before he opened the door.

The foaming waves of the ocean crested and broke against the red cliffs that held up the south side of the Fort. To his left, the lights of the traders’ ships glimmered up the beach, near the port. The girl stood farther down the path to his right, close to the edge of the cliff.

She looked up at the sky, moonlight cascading over her profile as she smiled.

It dragged an unwilling memory from the echoes of his mind. Of a childhood friend with dancing eyes and a challenging smile that had often led him into trouble. A friend long dead.

The memory ached in his chest, a remnant from an earlier life. A life where he didn’t know four ways to kill a man quickly.

The memory ached in his chest, a remnant from an earlier life. A life where he didn’t know four ways to kill a man quickly.

He watched her from the shadows of the door. The ocean breeze held a chill, and the girl wrapped her light brown arms under the end of her uttariya, shivering. She was clad in a simple crimson sari with a thin gold border, the bolt of stiff silk thrown over one shoulder and held up with a gold waist sash. He glanced at her feet. No toe rings, which meant she was unmarried. No anklets or earrings or ornate gold jewelry at all to denote her status. She must be one of the newly arrived traders, as they always dressed simply to show no affiliation.

Kunal felt himself relax at the realization, though he wondered why she was here — most traders should be off to the harbor by this time in the evening. Was she lost?

He revealed himself from the shadows, walking toward her.

“You’re not supposed to be here,” he said, stopping a pace away from her.

He saw her tense, clutching her uttariya tighter to her chest. Her eyes darted to his bronze armor, to the gold cuffs he wore at his wrists, indicating he was a soldier.

Kunal noticed the look and pulled back, swallowing his sharp tone. Of course she’d be frightened after he had said it like that. Only a few days ago, the commander of the cavalry had thrown a trader in irons for arguing with a Fort captain.

They stood there for the briefest of moments, staring at one another, neither moving as the wind crashed into them.

The girl was even more striking up close. Her chestnut eyes were huge, framed by thick, arched eyebrows. Her face shone with fear but her chin jutted out, defiant.

The girl was even more striking up close. Her chestnut eyes were huge, framed by thick, arched eyebrows. Her face shone with fear but her chin jutted out, defiant.

Kunal coughed and ventured a tentative smile. He tried to angle himself in the straining moonlight so that she would see he was unarmed and meant no harm, raising both hands for good measure. The tension in her shoulders eased and he tapped the four fingers of his right hand against his chest in greeting, the symbol of welcome and warmth in Jansa.

“I was up there and saw you going down the wrong path,” he said. Kunal cleared his throat and pointed to the embrasure that jutted out. “You’re not allowed — it isn’t safe to be on the western side of the Fort tonight.” His words came out fast, laced with a nervous energy. “Are you lost? It can be hard to navigate the trading footpaths at night. This one leads away from the harbor.”

He couldn’t remember the last time he had spoken to a girl at length; women had been removed from the Jansan army after the queendom had been dismantled, and the Fort was inhabited only by soldiers and the passing traders that helped it thrive. The other soldiers made trips into town on campaigns, but Kunal never partook in those celebrations.

He was used to seeing traders from all over the Southern Lands and Far Isles at the Fort and knew most of them by name, but he didn’t recognize her. His eyes darted to the small pin that held together her sari pleats, shaped like a jasmine flower, which he could tell was Dharkan-made. But she wore no valaya, the metal bracelet Dharkans wore from birth. No Dharkan would set foot here, near the Fort, anyway — she must be Jansan.

It was uncommon to see a Jansan wear such a pin nowadays but not impossible. Before the War of the Brothers, Jansans and Dharkans had mingled: they had loved and lived together as denizens of the Southern Lands. It was only after Jansa’s queen and royal family had been murdered, ten years ago, that the war had started and the bond between their countries had fractured.

It was only after that bloody coup that Kunal’s entire life had changed.