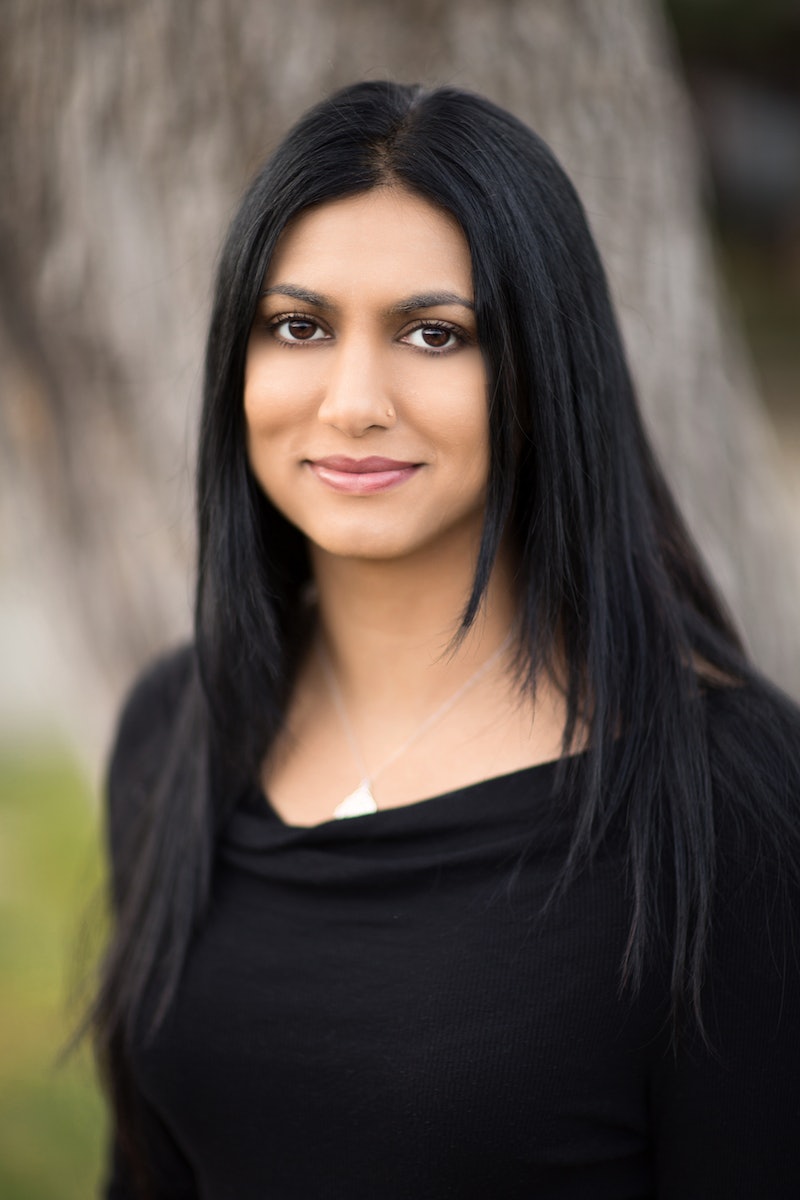 Sabaa Tahir clearly knows a thing or two about writing a successful novel. She has, after all, finished two books — and both have gone on to become New York Times bestsellers. In celebration of the release of her newest novel, A Torch Against The Night, author Sabaa Tahir reveals the secrets to her writing, world-building, and querying process. (Spoiler: It involves a whole lotta of research.)

Tahir's A Torch Against The Night , the sequel to Bustle's best YA novel of 2015, An Ember In The Ashes, continues the story of Laia and Elias, a slave girl and a soldier on the run from the Emperor and his forces and on a journey to free Laia's brother from prison. This book also introduces a new perspective — that of Helene, a fellow soldier and Elias's best friend. She also happens to be the right-hand-woman of the Emperor, and she's been tasked with finding and killing Laia and Elias. The book ends with one major cliffhanger, so stay tuned for the release dates for book three and book four.

A Torch Against The Night, $12, Amazon

Author Sabaa Tahir, a former editor at The Washington Post, quit her job in 2009 to raise her newborn and write what would become her debut, An Ember in the Ashes. Drafting a novel while raising a baby wasn't exactly easy, but she made it work. "It was really just finding the time," Tahir tells Bustle. "Making sure everyone knew I was serious I was going to do this. It's hard, because I think people will [be supportive] for maybe one year. Then it stretches to two years, and it becomes, 'OK, you're still writing your book.'"

It took her several years to draft and edit her first novel, which would eventually be released in 2015 to critical acclaim. An Ember In The Ashes was celebrated for its perfectly-paced action, page-turning tension, riveting characters, and imaginative world-building. But Sabaa Tahir is the first to admit that none of that came easily. In fact, she says, much of her writing happens in edits. "The first draft didn't have any of the world building it. It was very straightforward — just the story," she says. "As time went on, I layered in social situations and societal mores and the actual setting and the physical descriptions of the setting and the way the characters felt about the setting. That all got layered in. That's how I write."

"The first draft didn't have any of the world building it. It was very straightforward — just the story. As time went on, I layered in social situations and societal mores and the actual setting and the physical descriptions of the setting and the way the characters felt about the setting."

After writing a rough first draft of several chapters ("You can't edit a blank page," she says, quoting her mentor), she would do interviews and research to fill in the details. "I would take everything I've learned and put it into the story," she says. "It's the only way I can write."

At one point, she believed Torch would take place near the sea, so she journeyed to the coast to get a sense of the sights, the smells, and the sounds of the ocean. But her research went far beyond the intricacies of the setting. She conducted interviews with West Point cadets, FBI agents, and veteran soldiers — all of whom she hoped could provide some insight into the mind of her main character, Elias, a tortured warrior. "There was also psychological world-building," she says. "I researched what it's like to be in a war. What it's like to kill somebody... how modern warfare subverts the human repugnance towards killing through training."

Doing research doesn't exactly mesh with the idea of the "sexy author lifestyle," but Tahir's leg-work proved to be essential in the creation of the dynamic characters that make her novels so addictive. While the research contributed heavily to the personalities of three main characters — Elias, Laia, and Helene — it also helped her create the series' many bad guys (and girls.) Tahir says it was important to her to feature villains who were balanced — not all good, not all evil, and sometimes a little bit of both. In a huge, unexpected twist, a new enemy presents themselves at the end of A Torch Against The Night, setting the stage for the conflict of the next two books. There was never just one villain in this series, but this revelation makes things infinitely more complicated — and more interesting.

"Each person has their own villain," Tahir says. "To me, that's a reflection of our world. There's never just one villain. [In] Harry Potter, there wasn't just Voldemort; he was The Big Bad, but there was Bellatrix Lestrange, Lucius Malfoy, Draco Malfoy, Umbridge. There's so many people in our world who are maybe not-so-great. The idea of one villain for all three characters wasn't something I was interested in."

"Each person has their own villain. To me, that's a reflection of our world. There's never just one villain."

Even when her novel was finished, edited, and polished, she knew she had more work to do. "When it came time to query [literary agents], the book was ready to be out there," she says. "But there's a ton of research in terms of who to query or who will be the right fit."

To prepare for the querying process, she turned to two sites for help: QueryShark and the blog of former literary agent Nathan Bransford. "I did my homework," she says. "I'd like to say that I was trying to be prepared, but I think it was actually procrastination. I was so scared to send out the book."

Whatever the reason for her exhaustive studies, it worked: she landed a literary agent in just five weeks.

Tahir knows the writing life is far from glamorous ("It was hard. I was really lucky in the sense that I have a lot of support from my husband and my family."), but the end result makes it more than worth it: A Torch Against The Night is a #1 New York Times bestseller, two more books are on the way, and the movie rights were sold to a major production company. Sabaa Tahir has plenty to look forward to, but for now, she's just focused on enjoying the release of Torch and writing more books that do justice to the characters she's so thoughtfully crafted and gifted to the world.

An Ember In The Ashes by Sabaa Tahir, $10, Amazon

A Torch Against the Night by Sabaa Tahir, $11, Amazon