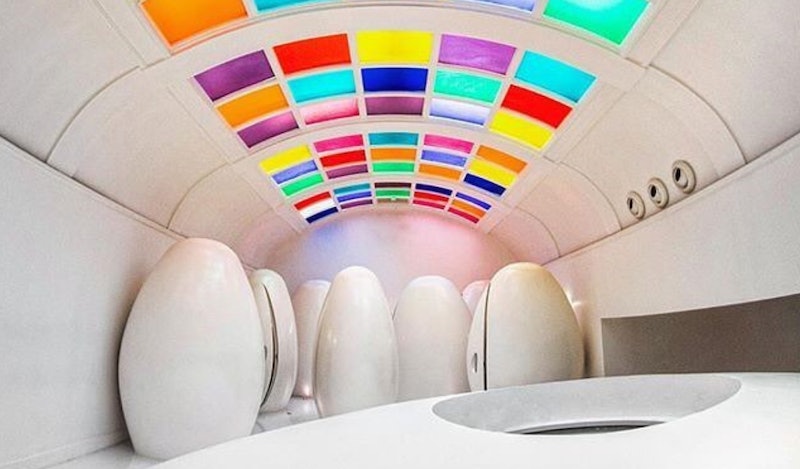 When it comes to going out for dinner, it's no longer sufficient for only the service, food, and ambience to be good; the bathrooms have to be exceptional too, especially if you're on Instagram. Yep, the interiors of an establishment are increasingly being judged through said establishment's loos, and we, the social media generation, are responsible for this. Some bathrooms are so popular they garner thousands of posts on the 'gram, usually under the hashtag #BathroomSelfie. So let's take a look at the top 10 most Instagrammed bathrooms in the world.

Fragrance Direct has undergone some (pretty fun, may I add) research to reveal the most Instagrammed bathrooms in the world. The brand analysed the Instagrams of over 80 of the most talked about trendy restaurant bathrooms, and took into consideration the amount of likes bathroom pics get, the proportion of pictures from each establishment which are taken in the loos, and the average pictures taken per month in each toilet. They scrolled through 40,000 posts from December 2018 and January 2019 to come up with their top ten most Instagrammable bathrooms list.

Unsurprisingly, London produced five of the top ten in the list, and I'll bet you can guess which beloved establishment sat at number one. Yep, that's right, the unique egg shaped single cubicles and jazzy disco ceiling lighting at Sketch hit the top spot, and with an average of 1448 pictures taken in there per month, it's really no surprise. While each room at Sketch is just as impressive as the last, it's the toilets that produce 40% of the pictures taken on Instagram. Woah.

While this will come as no real shock (Sketch is pretty much known for its loos, and even decorates them seasonally), there were some other pretty amazing bathrooms on the list, with four more being in London, and one in Leeds. In fact, every single bathroom in the top five is situated in London!

With Sketch at number one, the second spot is taken by boujee restaurant Annabel's, which I guarantee you will recognise from Instagram. With its incredible pink sinks and golden taps, and a ceiling made of pink roses, the loos at Annabel's are pretty much my childhood pink dream come to life. 352 pictures are taken per month here, which is an impressive feat I'm sure you'll agree.

In third is Asian restaurant and bar Sexy Fish, which boasts 109 bathroom pics per month, and in fourth place is The Ned, a huge hotel owned by the Soho House group. In fifth place is the equally as swanky The Ritz, where the bathrooms are unsurprisingly super sophisticated.

Also on the list from the UK are London's The Mandrake hotel, and Leeds' Chinese restaurant Tattu. The other spots are taken by Toronto's Locals Only (in sixth place), New York's The Royal Palms Shuffleboard Club (in seventh place), and New York's House Of Yes (in tenth place), which has the most insanely cool disco ball walls.

Whoever thought nipping to the loo could be so chic?