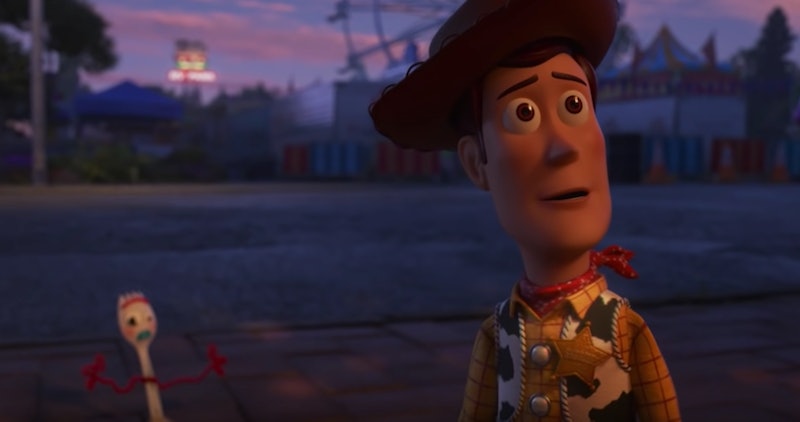 Even though Toy Story 3 offered what '90s kids thought was their final farewell to Woody and the gang, Pixar and Disney revealed that the story didn't end with Andy giving up his toys when Toy Story 4 was announced in 2014. As the movie hit theaters on June 21, we millennials who grew up with Woody (Tom Hanks) and Buzz (Tim Allen) had a good five years to emotionally prepare for what was almost guaranteed to be another emotional conclusion — though possibly open-ended. But the Toy Story 4 ending seems to wrap up the narrative in a pretty tight bow.

That doesn't mean that Toy Story 4 is officially the last installment. Per ComicBook.com, producer Mark Nielsen said at a press event that that decision hasn't been made yet. With the way we leave the characters in this sequel, however, a potential Toy Story 5 would likely look different from the other four.

Major spoilers for Toy Story 4 ahead. Before the credits role in this one, Woody leaves the rest of Bonnie's (Madeleine McGraw) toys to live freely as a lost toy with his longtime crush, Bo Peep (Annie Potts). Buzz, Jessie (Joan Cusack), Rex (Wallace Shawn), Hamm (John Ratzenberger), Slinky Dog (Blake Clark), and the rest stay on in Bonnie's bedroom, so it's truly the end of an era. TL;DR: if you thought your childhood died after Toy Story 3, the new film in the series put the nail in its proverbial coffin.

Does that sound too morbid to say in relation to Toy Story? The series has become increasingly dark with each film, and Toy Story 4 is full-on macabre at times.

With the combination of Bo becoming a self-actualized lost toy who belongs to no kid and the introduction of Gabby Gabby (Christina Hendricks) and her spooky ventriloquist dummy henchmen, Toy Story 4 takes Woody and his friends out of the safety of their kid's home in a more threatening way than ever before. Then there's Forky (Tony Hale), the homemade toy that Bonnie made out of a plastic spork and pipe cleaner, who swears he belongs in the trash. Woody desperately attempts to convince him that a toy's greatest purpose is belonging to and uplifting a kid, but in the end, he realizes that there's plenty of life outside of a child's bedroom — and that that way of living may be for him.

Of course, Woody has faced existential crises before, but this is the first time he's opted for a different way of life. Toy Story 3 ended on the melancholic but uplifting note of Andy passing his beloved friends over to Bonnie. But now that the gang themselves are separated, what's next?

The future of the franchise is unclear, besides the fact that Forky will return to screens on Disney's new streaming site Disney+ in a limited series called Forky Asks A Question. In an interview with Chris Evans’ Radio 2 Breakfast Show in the U.K., Hanks revealed that he struggled to get through the final scenes of Toy Story 4 due to their emotional impact. According to The Independent, Hanks said on the radio show that he had to record his final scenes with his back towards the Toy Story creators who were in the room with him. "When I realized what they were going for [with the ending], I realized, ‘Oh, this is a moment in history,'" Hanks said.

The ending of Toy Story 4 is a historical moment indeed, but whether this is the last you'll see of Pixar's anthropomorphic toys remains unknown.

More like this
Anne Hathaway Shared A "Thrilling" 'Princess Diaries 3' Update
By Darshita Goyal
The 'Scream 6' Trailer Shows Off Hayden Panettiere's Return & Ghostface In NYC
By Jack Irvin and Jake Viswanath
12 Years Ago, Austin Butler Manifested His Oscar Nom In This Disney Movie Scene
By Jake Viswanath
Sandra Bullock’s Razzies Speech Proves She’s The Ultimate Miss Congeniality
By Sam Ramsden
Get Even More From Bustle — Sign Up For The Newsletter
From hair trends to relationship advice, our daily newsletter has everything you need to sound like a person who’s on TikTok, even if you aren’t.