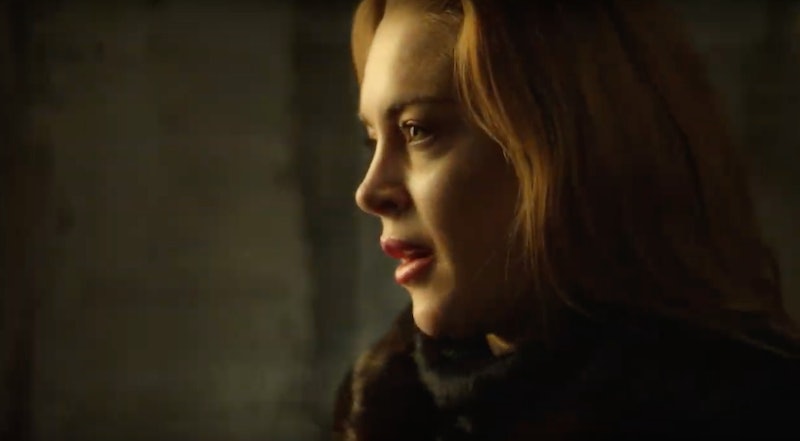 Fans may know her as new girl Cady Heron, twins Hallie Parker and Annie James, and angsty teen Anna Coleman. But Lindsay Lohan's new horror movie Among The Shadows will show audiences a totally different side to the actor. After her hiatus from the entertainment business, Lohan is returning to the screen, not only with her new MTV reality show, but a film role that's unlike the majority of her most iconic past work.

The trailer for the horror/thriller was released on Monday. The film stars U.K. native Charlotte Beckett as Kristy Wolfe, a private investigator who's also a descendant from a line of werewolves. She's hired by Patricia (Lohan) to investigate a brewing war in the underworld, which led to the murder of Kristy's uncle, all while hiding her ancestry. Kristy and Patricia team up in the trailer, as Patricia runs the show and explains that someone is also trying to kill her husband. The movie will be available on March 5 on VOD and Digital HD.

Fans who watch may find the trailer reminiscent of the Twilight Saga and the Underworld film series. Though Lohan has had roles in a handful of thrillers and dramas, Among The Shadows seems to be her biggest dive into the horror genre thus far.

Perhaps her other film that's closest in nature is 2007's I Know Who Killed Me, which is more of a mystery/thriller. In it, Lohan stars as a woman who's found after going missing, only she doesn't believe she's the person everyone, including her own family, thinks she is. Other thrillers Lohan has starred in include 2013's The Canyons and 2007's crime drama Chapter 27, according to IMDb. Lohan is also working on The Honeymoon, a psychological thriller based on Tina Seskis' book of the same name, which she'll produce and star in.

Lohan's role in Among The Shadows does, in a way, mirror her role in her MTV show Lindsay Lohan's Beach Club. In both, she's the boss. Her MTV show, which premiered in early January, follows Lohan in boss mode as she handles her staff at her Lohan Beach Club in Mykonos. The show was her big return to Hollywood after taking about four years off from acting and on-screen ventures. "My entire life has been in the public eye," she said in a recent interview with Entertainment Weekly. "So, people will see that this is something really important to me, and I don't want anyone coming between that."

After experiencing a tumultuous early life in front of the cameras and in the tabloids for multiple arrests and personal issues, Lohan seems to be clear on what projects she's taking on now and where she's headed. "I’m just on a different path right now, and I have so many things on my plate that I don't want to go backwards and put everything else back on my plate," she continued to EW. "I'm happy where I am."

Maybe Lohan will explain why she was so drawn to her role in Among The Shadows, especially since it's her first leading role in six years. But because she's particular about what she's choosing to take on these days, fans can assume the role does have a special meaning to her in some way.

More like this
What’s New On Netflix: Ana De Armas’ 'Blonde' & A Nick Kroll Special
By Arya Roshanian
What’s New On Netflix: Meet 'The Real Bling Ring'
By Arya Roshanian
Lin-Manuel Miranda & Tituss Burgess React To 'Little Mermaid' Casting Backlash
By Radhika Menon
An Extremely Messy Ranking Of What Actually Happens In 'Don't Worry Darling'
By Chloe Foussianes
Get Even More From Bustle — Sign Up For The Newsletter