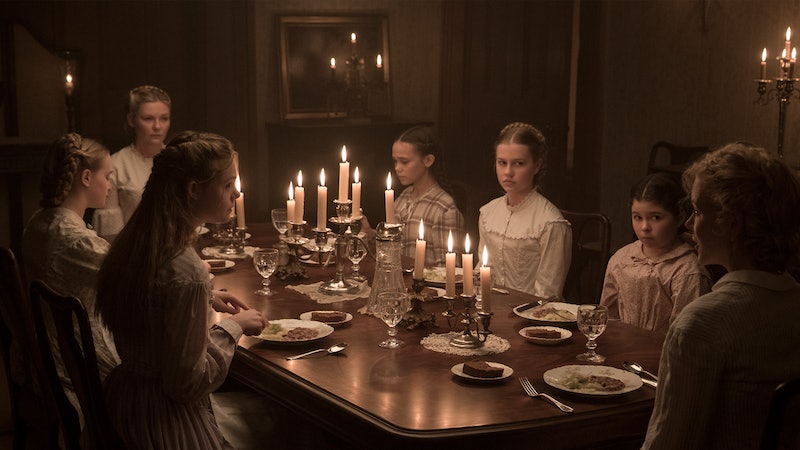 Just a few weeks after the 2017 Oscar nominations resulted in the coining of a new hashtag — #OscarsSoMale — the first trailer for Sofia Coppola's The Beguiled swept onto the internet like a breath of fresh air. The upcoming film is a remake of the 1971 Clint Eastwood movie of the same name, which in turn was an adaptation of the 1966 Southern Gothic novel A Painted Devil. Taking place during the Civil War, it tells the story of a wounded Union soldier who is taken in and cared for by the occupants of an all-girls boarding school in Mississippi… and whose mere presence proceeds to inflame the subdued passions of the school's staff and students alike.

In addition to Eastwood, the original film starred Geraldine Page and Elizabeth Hartman, two huge stars of their time. Likewise, Coppola's version of the story features an incredible cast of A-list actors, including Nicole Kidman, Kirsten Dunst, and Elle Fanning, with Colin Farrell taking over the role of the swoon-worthy soldier. But, judging by the trailer at least, it seems that Coppola has upended the focus of the 1971 film, which was about a male protagonist surrounded by women; in her updated vision, the women are the real focus of the story, with Farrell's character little more than a plot device to ignite the conflict.

Of course, trailers can often be misleading (remember how awesome the Suicide Squad trailers looked?); but in this case, there's reason to believe that The Beguiled really will focus on the relationships between its female characters more than on its sole male character. As a filmmaker, Coppola has devoted her career to making movies that revolve around complex, occasionally unknowable, occasionally unlikable, always fascinating women: The Virgin Suicides, Lost In Translation, Marie Antoinette, The Bling Ring.

This inversion of the film's gender dynamics doesn't just exist on the screen, either — it extends behind the scenes to include practically the entire filmmaking team. The 1971 original was produced, directed, co-written, film, edited, cast, and designed by men; the only women involved in prominent positions were the costume designer and co-writer Irene Kamp (who penned the screenplay under the male pseudonym Grimes Grice). Conversely, Coppola not only produced, wrote, and directed The Beguiled herself, she filled out her team with female editors, casting directors, production designers, art directors, set decorators, costume designers, and more. The only men involved in prominent positions are the cinematographer and a few of her co-producers.

To put that in context, only 20 percent of this year's non-acting Oscar nominees were women: 37 out of 152, to be exact. There were no female directors nominated, and only one of the 10 screenplays nominated even had a female co-writer (Hidden Figures' Allison Schroeder, who penned the script with the movie's male director, Theodore Melfi). The Academy took great strides in the racial diversity of its acting nominees this year — and in technical categories, too, nominating the first black cinematographer (Arrival's Bradford Young) and the first black female editor (Moonlight's Joi McMillon). But those gains only helped highlight the need for the industry to do more work when it comes to gender.

Even with that remarkably low percentage, the films represented by the Oscars still fare better than Hollywood in general. According to San Diego State University's Center for the Study of Women in Television and Film, of the top 250 highest-grossing films of 2016, only 7 percent had female directors — and that number was down 2 percentage points from 2015. We clearly need more women like Coppola making movies today (and hiring more women to help them make those movies. So, make sure to show your support for female-driven films by buying a ticket to The Beguiled when it hits theaters on June 23.