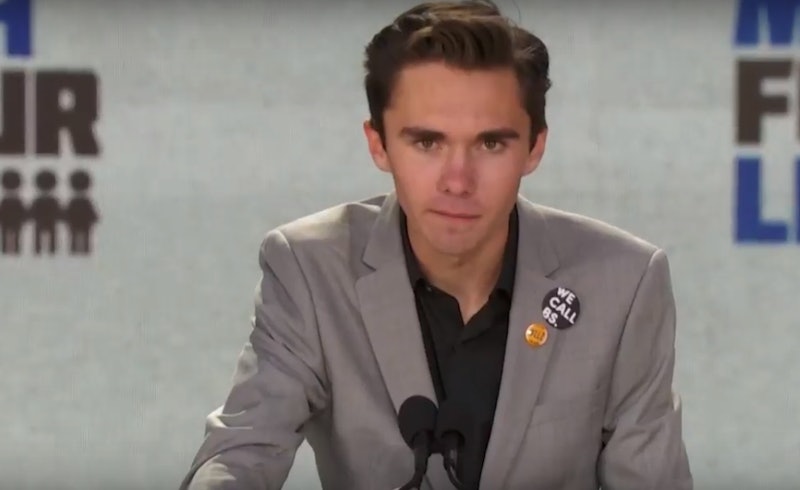 At the March For Our Lives in Washington, D.C., Marjory Stoneman Douglas shooting survivor and high school senior David Hogg gave a moving speech in front of the crowd gathered in the nation's capital. Hogg has emerged as one of the student leaders advocating for gun control in the wake of the Feb. 14 shooting in Parkland, Florida, that killed 17 people. Hogg is one of the organizers of the massive protest, along with Emma González, Sarah Chadwick, Cameron Kasky, and others who have kept this movement going strong. The transcript of Hogg's March For Our Lives speech is below.

First off, I’m gonna start off by putting this price tag right here as a reminder for you guys to know how much Marco Rubio took for every student’s life in Florida. One dollar and five cents.

The cold grasp of corruption shackles the District of Columbia. The winter is over. Change is here. The sun shines on a new day, and the day is ours. First-time voters show up 18 percent of the time at midterm elections. Not anymore. Now, who here is gonna vote in the 2018 election? If you listen real close, you can hear the people in power shaking. They’ve gotten used to being protective of their position, the safety of inaction. Inaction is no longer safe. And to that, we say: No more.

We will not stop until every man, every woman, every child, and every American can live without fear of gun violence.

Today is the beginning of spring, and tomorrow is the beginning of democracy. Now is the time to come together, not as Democrats, not as Republicans, but as Americans. Americans of the same flesh and blood, that care about one thing and one thing only, and that’s the future of this country and the children that are going to lead it.

Lastly, let’s put the USA over the NRA. This is the start of the spring and the blossoming of our democracy. So let’s take this to our local legislators, and let’s take this to midterm elections, because without the persistence — heat — without the persistence of voters and Americans everywhere, getting out to every election, democracy will not flourish. But it can, and it will. So, I say to those politicians that say change will not come, I say: We will not stop until every man, every woman, every child, and every American can live without fear of gun violence. And to that, I say: No more.

Thank you, I love you all, God bless all of you, and God bless America. We can, and we will, change the world.