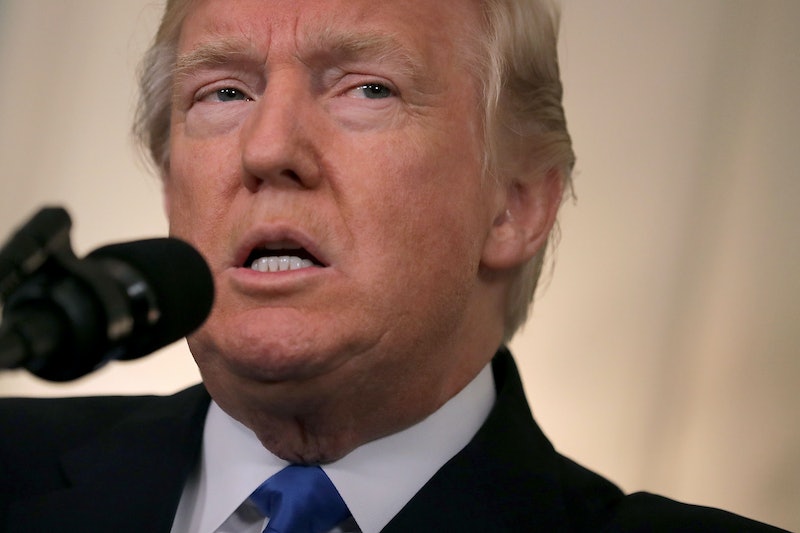 On Monday, a federal court inadvertently weighed in on one of the biggest existential political debates of the day: should Trump's tweets be taken seriously? A footnote to the 9th U.S. Circuit Court of Appeals' decision on Trump's revised executive order travel ban stated tweets of the president are relevant in determining the motivation behind executive and policy decisions. That means those early morning Twitter blasts are fair game as legal evidence.

The debate over how much to read into Trump's tweets has run cable news ragged, not to mention his own administration. Trump's prime supporters have regularly tried to downplay the content and power of his tweets. Counselor to the president and former campaign manager Kellyanne Conway accused the media of going overboard when it came to analyzing the president's messages, saying, “This obsession with covering everything he says on Twitter and very little what he does as president,” she told NBC's the TODAY Show earlier this month. Principal Deputy White House Press Secretary, Sarah Huckabee Sanders, echoed that sentiment saying the press is strung out, “over every period, dot,” of the president's social media presence.

In, perhaps, an attempt to both have and eat his cake, Press Secretary Sean Spicer pointed out the breadth of Trump's reach as far as his social media following goes, saying: "The president is the most effective messenger on his agenda and I think his use of social media — he now has a collective total of close to 110 million people across different platforms — gives him an opportunity to speak straight to the American people which has proved to be a very, very effective tool."

The 9th Circuit may have ended the efforts to dismiss Trump's tweets as mere superficial points of obsession for the pesky mainstream media. Although it was just footnote in the decision, the court found that Trump's tweets are a matter of public record and can be used to influence further rulings:

"Indeed, the President recently confirmed his assessment that it is the “countries” that are inherently dangerous, rather than the 180 million individual nationals of those countries who are barred from entry under the President’s “travel ban.” See Donald J. Trump (@realDonaldTrump), Twitter (June 5, 2017, 6:20 PM), https://twitter.com/realDonaldTrump/status/871899511525961728 (“That’s right, we need a TRAVEL BAN for certain DANGEROUS countries, not some politically correct term that won’t help us protect our people!”) (emphasis in original);"

And the president's tweets may be further codified. Democratic Rep. Mike Quigley introduced legislation to incorporate social media into the Presidential Records Act — and, thus, make it illegal for the president to delete tweets. Whether Quigley's Communications Over Various Feeds Electronically for Engagement — aptly referred to as the COVFEFE Act — is passed remains to be seen. And whether the COVFEFE Act would moderate the president's Twitter habits is an even bigger question mark.