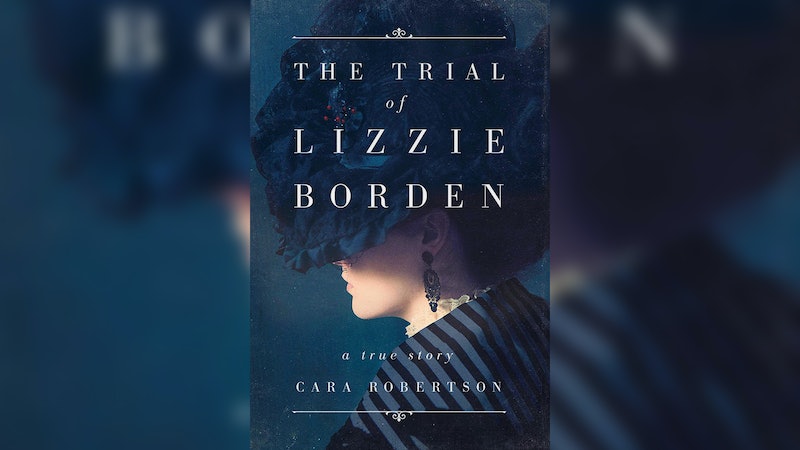 There are few stories in American culture as infamous as that of the murders of Andrew and Abby Borden. There is even a chilling nursery rhyme that goes along with the legend, you know the one: "Lizzie Borden took an axe, and gave her mother forty whacks. When she saw what she had done, she gave her father forty-one." While the rhyme lacks accuracy — Lizzie's stepmother, Abby, was struck around 19 times, and her father, Andrew, about 11 — it does capture the level of obsession with this particular crime. For more than a century, scholars, artists, lawyers, and laymen have examined the case, studied it from every angle, and made all forms entertainment out of it, all in the hopes of learning one thing: Did Lizzie Borden murder her parents? In Cara Robertson's debut The Trial of Lizzie Borden, readers get the chance to become members of the jury on one of America's most notorious murder cases. The author presents, in exhaustive detail, the facts (and many of the most popular fictions) of the case, but in the end, she leaves it up to the reader to decide.

On a hot August morning in 1892, the bodies of Andrew Borden and his wife, Abby, were found in their home in Fall River, Massachusetts. According to one witness, the victims’ faces looked like "a mass of raw meat." The only other people at home at the time the crime was committed were Bridget Sullivan, the Borden family’s housemaid, and Lizzie, the couple’s youngest daughter.

During a short inquest, both women testified about the events of that fateful day, offering differing and often conflicting accounts. Interviews with other Fall Rivers residents and those close to the family revealed that life in the Borden home was far from idyllic. Both Lizzie and her older sister, Emma, were estranged from their father, Andrew, and their stepmother, Abby. Although they lived in the same house, the women avoided interacting with their parents, going so far as to eat at different meal times. There were also hurt feelings a jealousy over property and money the girls believed their father was keeping from them.

In the end, Lizzie was charged with murder in the deaths of her parents, and so began one of the most notorious murder cases in American history, one that drew reporters from all over the world to the quiet Massachusetts town in hopes of learning how a respectable, church-going, middle class-gentlewoman could commit such an horrendous crime.

'The Trial of Lizzie Borden' by Cara Robertson
Amazon

As Robertson explains, "The idea of a maniac as a murderer provided an explanation for the shocking brutality of the murders: the skulls of the Bordens had been so shattered by the force of multiple blows that the victims were virtually unrecognizable." But was Lizzie a maniac, or just a jealous daughter caught in a crime of passion? Did she commit any crime at all?

Using legal documents, court transcripts, newspaper accounts, interview notes, and some newly available letters, The Trial of Lizzie Borden recounts each moment of the proceedings that followed. It is here that Robertson’s legal expertise shines through, transforming a standard courtside narrative into a gripping account of the trial.

Outside of the courtroom, and with the help of exhaustive research, Robertson also takes a deep-dive into the domestic lives of the Bordens, allowing readers to swim around in the strange reality of their household and their habits. Some of the details: The only jewelry Andrew Borden wore, and was buried with, was a ring given to him by Lizzie; each member of the Borden household, including Lizzie and Emma, kept their bedroom doors locked following an incident of theft; and just days before her parents’ murders, Lizzie was seen shopping for poison at a local drug store.

Robertson takes extra care in her presentation of Lizzie, and not just as the ax murderer from the legend, but as a Victorian woman trapped by the circumstances of her time. "Too old to attend one of the new women’s colleges and too wealthy for the mills, Lizzie Borden, like other middle-class women of her generation, was relegated to unproductive marginality, free to enjoy her leisure in the presumed comforts of her home," Robertson writes. "Unlike most other women of her generation, however, Lizzie Borden never married. The average age of marriage in the 1890s was twenty-two; at thirty-two, Lizzie Borden was a spinster. While her parents lived, she would always be a houseguest in her father’s home."

It is this detail — Lizzie being unmarried — that made her suspicious to so many. It’s her nonconformity to the times that inspired many to believe her capable of murder. "Hysteria was the most common explanation for the transgressive acts of middle-class women," Robertson writes. "By the end of the nineteenth century, women’s nature was seen as fundamentally different from male models of physiology." Yet, at end of the sensational trial, she was acquitted of the charges.

There are countless books, movies, television shows, and documentaries about the Borden murders, yet The Trial of Lizzie Borden manages to provide a fresh perspective on the crime. By presenting its subject as a real, complicated, and three-dimensional woman, The Trial of Lizzie Borden succeeds where other retellings of the true crime — both the factual and fictitious — have failed. Instead of posturing Borden as a feminist folk hero, or a righteous victim, or a cold-blooded psychopath, Robertson’s narrative allows her to exist as she was, full of contradiction and clouded in mystery.

Sure, it is easy to imagine Borden as an unhinged murderer driven by madness or malice to commit the horrible crime. It is even more tempting to pretend there was some greater justification, some meaningful motivation for her brutal actions. But in the reality laid out in The Trials of Lizzie Borden, the truth is much more complicated, and we might never know it in full.