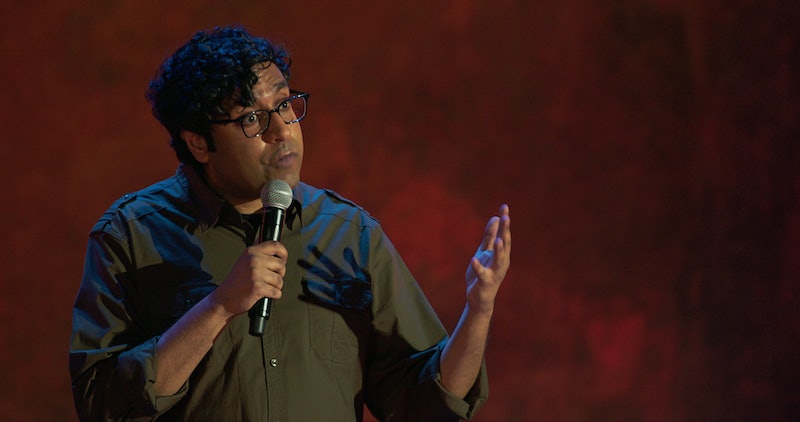 You may know Hari Kondabolu best from his documentary, The Problem With Apu, in which the comic and many other South Asians argue that The Simpsons character Apu is a hurtful stereotype that has caused lasting damage to society. And though Kondabolu does not speak explicitly about The Simpsons in his new Netflix special, Hari Kondabolu: Warn Your Relatives, the best joke in the set serves as an sneaky indictment of the type of white person who encourages marginalized people to be content with the progress that's been made and to stop demanding better.

Kondabolu is interested in tackling topics that disturbs the comfort of his audience — especially those with privilege. Kondabolu says in Warn Your Relatives that during his stand-up performances, he tends to see "white people walk out," but that doesn't mean he'll pull any punches when criticizing the status quo.

The comic takes aim at Trump and modern alt-right groups in this special, but he also skewers white people who may call themselves liberal, but whose attitudes towards race are less extreme but perhaps more insidious. Kondabolu crafts a metaphor to communicate the hurt that oppressed groups endure when they speak to white liberals whose response to the mass injustice in the world is to comment that things used to be worse and that marginalized people should just appreciate that things aren't as bad as they used to be. He says:

"Oppression is pain. Whether your oppression is homophobia or racism or sexism or transphobia — whatever your oppression is, that's pain. And when you're telling someone that 'we've come a long way' you're telling them that they have to hold their pain for longer ... That's like if you got stabbed and you're in an ambulance that's stuck in traffic and you're just screaming, 'Help me, please! Help me!' and the paramedic's like, 'Sir! Sir! C'mon! A hundred years ago, I mean, we wouldn't have even had an ambulance. Might've had a horse and buggy, might not have had penicillin. So when you think about that, we've come a long way! Actually, we've only come a few blocks from your house."

People with privilege who fancy themselves allies but carry a passive attitude towards oppression are by no means blameless. And acknowledging an issue without taking any action does not help anyone. While Warn Your Relatives was filmed in 2017, before The Simpsons used a plotline to indirectly respond to the criticisms mentioned in The Problem With Apu, the bit seems to almost anticipate the episode itself.

A 2018 episode of The Simpsons addressed the accusation that Apu is a caricature whose popularity has been detrimental to South Asian Americans during a discussion about stories from the past that were accepted in their time, but were deemed offensive or in poor taste as time goes on. The show seemed to speak right to viewers who disagree with the portrayal, when Lisa Simpson said, "Something that started decades ago and was applauded as inoffensive is now politically incorrect. What can you do?" before panning over to a framed picture of Apu.

It's the same kind of passive response to oppression as, "We've come a long way," in that The Simpsons' didn't even bother to engage in the conversation, merely to acknowledge it and walk away. Kondabolu's joke illustrates that comments about oppression that dismiss the opportunity to push for more growth, empathy, and change are cop-outs and should be treated as such.

Another point that the joke drives home is that progress cannot be measured by time, but by action. Sure, the world would've been more difficult for a knife wound victim a hundred years ago, but that doesn't mean that the ambulance shouldn't be moving as fast as it can.

Kondabolu argues that it will take "John Brown white people" to put in the work and push the metaphorical ambulance to the hospital. Per History, John Brown was a white abolitionist who, in the years leading up to the Civil War, used his resources to assist freed slaves, pushed for an armed rebellion against slaveowners, and even formed an army of his own to attack and occupy a government arsenal at Harper's Ferry, Virginia, which resulted in Brown being captured and executed. Kondabolu holds Brown up as an example for what a true white ally can do and argues that the world needs people who will sacrifice their money, power, privilege, and even lives for the movement. They have to put up or shut up, as it were.

It's simply not enough for people — especially white people — to look at the world and acknowledge oppression without doing anything. There are millions of people sitting in the back of that ambulance waiting to get to the hospital, and hearing someone disingenuously say, "What can you do?" hurts far more than it helps.