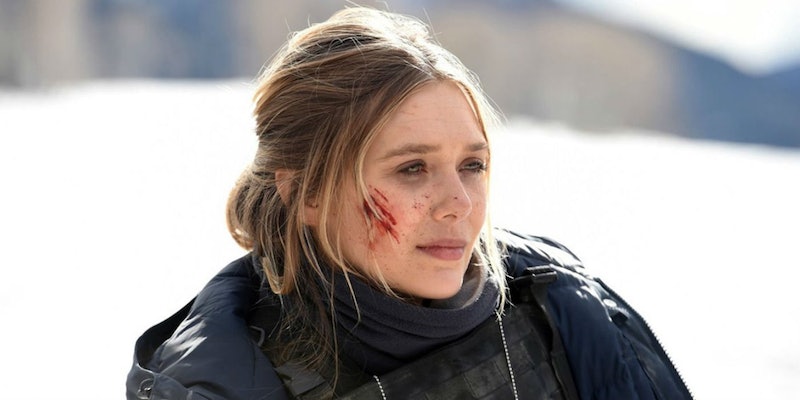 On the Native American reservation of Wind River, life expectancy is 49-years-old, and unemployment rates are higher than 80 percent, according to The New York Times. But there's something more startling than these grim figures — the utter lack of statistics surrounding missing Native American women. Wind River, written and directed by Taylor Sheridan, follows an FBI agent (Elizabeth Olsen) and a tracker (Jeremy Renner) who attempt to find the man who raped and murdered a young American Indian woman. "It's based on thousands of actual stories just like it," Sheridan told NPR. The film concludes with a chilling quote: “While missing person statistics are compiled for every other demographic, none exist for Native American women.”

This revelation was enough to get Olsen, who plays a rookie FBI agent put in charge of the case, to sign on to the project. "I was so shocked after I read the script," she says over the phone. "I wanted to meet [the director] and ask, 'Is this real?' Because I didn't get it. I didn’t understand how this is something that exists in the same country that I live in. These are my neighbors and these are states I’ve been to."

In the same NPR interview, Sheridan shared exactly how they came to include this non-statistic. "I had two researchers spend three months trying to find a statistic... They came back and said, 'Taylor, we cannot find a statistic.' No one's keeping it. And I said, 'well, that's our statistic.'"

Though no one knows exactly how many Native American women go missing each year, there are some — entirely disturbing — statistics available to consider. According to an additional New York Times article, American Indian women are raped and sexually assaulted at a rate four times the national average. They are also 10 times as likely to be murdered than other Americans.

The more Olsen learned of these statistics, the more she — not unlike her character — sought to find answers. "A white man can come onto a reservation, commit a crime — rape a woman — but he can only be caught within the reservation from reservation police," she says, her voice rising. "If he’s caught outside the reservation, unless it’s a felony, there’s nothing you can do about it."

Sheridan explained this injustice in an interview with Newsweek, saying, "Sexual assault of a Native woman by a non-Native couldn’t be prosecuted because it was a state crime on federal land. At the same time, if you were a Native accused of assaulting a non-Native, you could be prosecuted twice, once by the federal government and once by the tribal police. It was a double standard of medieval proportions.”

It is an entirely distressing, nauseating truth about an entire population that law enforcement at large seems to have forsaken — and it frustrates Olsen. "The fact that there are such few resources [allotted] to even figure out why it’s been such a problem — why this is something that there’s not even a statistic for — is a very strange and confusing thing. It’s a constant disrespect is what it is," she says.

The film explores these themes under the guise of being a crime thriller, and, appropriately puts Olsen's character in charge. She's a woman with little experience in the field, sent to lead an investigation in an almost entirely male-dominated arena. The odds are stacked against her, as they are for women born on the reservation. No one thinks she's capable of pulling it off — perhaps not even herself.

"She has to overcome a lot in this film in order to find her own strength," Olsen says. "She becomes an incredibly able person. But it was also really intimidating to have to assert herself as the authority figure in this group of very testosterone heavy men."

She is also a character, who, perhaps similarly to many viewers going in to the film, did not know about the injustice Native American women face on reservations. She is someone who initally believes in the justice system, and because of her experience at Wind River, realizes the system she's realied on her entire career is broken. "It is a system that we’ve set up to fail by providing a lack of resources," Olsen says. "It's one example of how we’ve mistreated an entire people from generation to generation to generation."

Because of her experience on this film, Olsen has since joined a nonprofit, The Rape Treatment Center, in order to tangibly provide support to those affected. "They create a community that fully supports a victim or survivor," she says.

There is no easy solution to problems the Native American population faces. But whatever the solution may be, the journey towards justice will undoubtedly be a long, cold, a grueling process — just like prosecuting a rapist or murderer on the Wind River reservation.