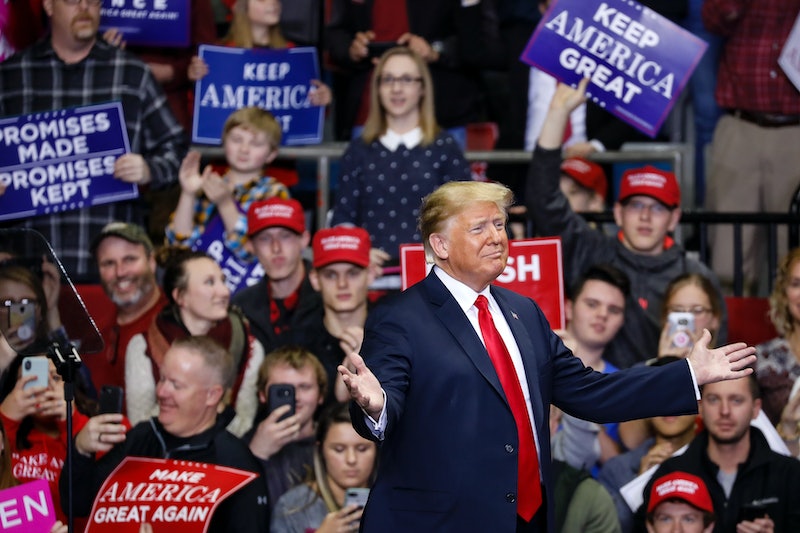 While the 2020 presidential election may seem like a long way off, President Donald Trump has already racked up a number of bills related to campaign spending. In fact, new filings released by the Federal Election Commission (FEC) have revealed that the Trump campaign owes the government more than $1 million. But despite its debt, the Trump campaign may have a significant advantage over Democratic challengers when it comes to fundraising revenue.

Documents released by the FEC on Thursday show the Trump Campaign owes the U.S. Treasury Department an estimated $1,006,954.10 in travel expenses. According to The Washington Post, that debt likely relates to government resources such as Air Force One, Marine One, or the presidential state car being used to transport the president to his various midterm rallies. Bustle has reached out to both the Trump campaign and the White House for comment.

Still, in the last three months of 2018 alone the Trump campaign is reported to have raised more than $21 million. What's more, The Washington Post has reported that Trump's total re-election campaign fundraising efforts have raked in "a record amount for a sitting president at this point in the election cycle." According to the paper, Trump's campaign has so-far raked in more than $129 million, giving him a sizable advantage when it comes to funding over the Democratic candidates only just now entering the 2020 race.

According to The Washington Post, FEC records have shown that the majority of Trump's fundraising in the last three months of 2018 came from small donors who contributed $200 or less to the president's re-election campaign. In a statement to The Washington Post, Michael Glassner, the Trump campaign's chief operating officer claimed the large number of small donors was "a true testament to President Trump's fulfillment of his promises made to the forgotten men and women of America."

But while the Trump campaign has drawn in more money than any other potential 2020 candidate in the last quarter of 2018 alone, its spending was still greater than its incoming funds, The Washington Post has reported. Much of that spending comes from Trump's midterm campaign efforts and various legal fees, according to the paper.

However, while a majority of presidents don't begin to think about re-election fundraising until closer to the halfway mark of their first term, Trump has reportedly been raising money since the early days of his presidency. And his efforts haven't been without reward. In a show of support likely aimed at discouraging any potential Republican primary challengers, the Republican National Committee unanimously passed a resolution last month granting Trump the party's "undivided support" in seeking re-election.