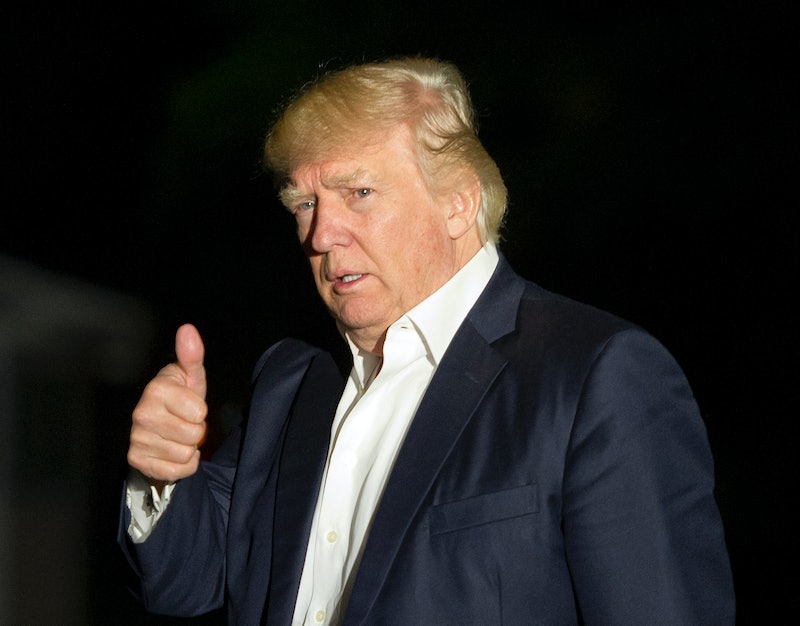 We all know that the latest administration has caused a lot of stress, but new research shows that it goes beyond that — Trump is breaking up relationships. Seriously. As if stripping women of their healthcare and their dignity wasn't enough, he's take a swipe at our relationships as well. Now, politics can always cause relationship problems. In fact, the data from Wakefield Research looked at 1,000 U.S. adults and found that one in ten couples broke up over political disagreements (and 22 percent of Millennial couples did the same). But the really interesting part is when you start to look at the influence Trump has had on relationships specifically. Because under Trump, politics is causing more relationship stress than ever. Why? Well, what once may have once just been hypothetical debates or verbal sparring are suddenly becoming very real.

Why is this happening? "Because he’s the President, and he’s such a polarizing figure," Grant T. Moher, Esq., a managing partner at Curran Moher Weis, tells Bustle. "It seems people are either with him or against him, with not many in between. Also, the issues that seem to be grabbing people’s attention can be very personal. A recent prospective client shared with me that his wife’s support of Trump had driven a massive wedge between them. They would argue politics and it got to the point that she began questioning his patriotism. This was deeply personal for him, and I’m sure for her as well. I’ve seen a lot over my career, but this was the first time I’ve seen political differences be so divisive that it was the final driving force behind the end of a long-term marriage."

So it's obviously hitting people on a really person level. Here's what the survey found:

How Many Relationships Have Been Impacted By Trump's Election

Sure, politics is always stressful for certain relationships — but Trump has brought it to new levels. Twenty-two percent of Americans said that they knew a couple who had been impacted negatively by Trump's election specifically.

The Amount Of Millennial Relationships Impacted By Trump's Election

With all the data, it seemed like millennials were more affected than the average respondent. In fact, a whopping 35 percent of millennials said they knew a couple who had impacted by Trump. Which is just way too many.

How Many Relationships Are Strained Due To The Current Political Climate

Perhaps unsurprisingly, because Trump seems to be a never-ending stream of stressful and disgusting twists, it's not just the election — it's the administration causing ongoing problems too. Nearly a third of respondents who were married or in a relationship said that the current political climate was stressing out their relationship. And it's a climate that never seems to get any better.

How Many Couples Are Arguing About Politics Now More Than Ever

In fact, 24 percent said of those who were married or in a relationship said they were arguing about politics now more than ever. Personally, I have trouble figuring out how you could date at all if you had really opposing political views. But, if you do have different views from your partner, it's easy to see how this would be an especially divisive administration.

Money Issues Vs. Trump Issues: Which Is More Stressful?

Twenty-one percent of those in a realtionship or married said that Trump was more stressful to their relationships than money issues. You know, money issues — the one thing that it normally the biggest sources of stress in a relationship? Yeah, Trump is even worse than being broke and fighting about it all the time.

How Many Non-Trump Supporters Said They Would Consider Divorce, Hypothetically

So they asked those who don't support Trump (and whose partner's don't) how they would feel if they were married to someone who voted for Trump. 33 percent of respondents — and 43 percent of Millennials— said they would consider divorce. I can totally see why.

If you already have a politically misaligned relationship, Trump can bring all of that to the service. Don't back down — political views are a reflection of who we are and we believe. And if the differences are that great, they exist elsewhere in your relationships too.