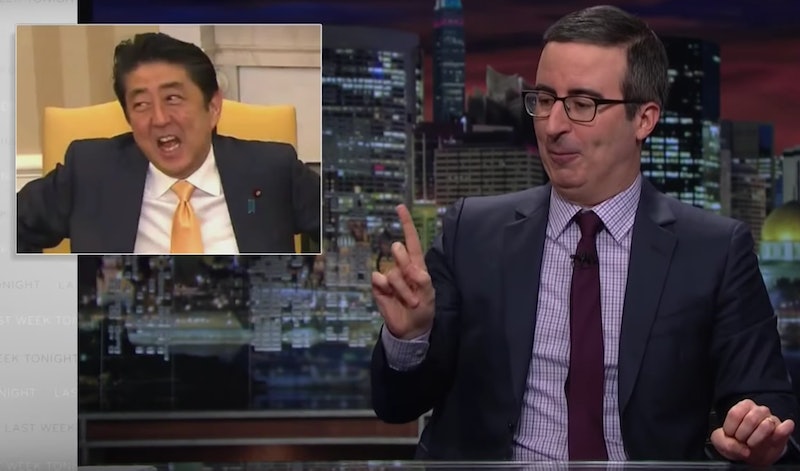 If you're still down about Donald Trump being elected president, you're not alone. John Oliver returned for a new season of Last Week Tonight Sunday night and he shared his tips for coping. He has been using a picture of Eddie the dog from Frasier to center himself, because the dog is an example of "something that has absolutely no idea what's going on in the world right now." But the question is how long that'll work because, as Oliver said, "this is going to be a long presidency." Watch the Last Week Tonight Trump handshake video montage to get an idea of just how long it could be feel.

Oliver regularly has mash-ups of awkward or embarrassing moments, but this one takes the cake when it comes to Trump. What's in a handshake, you say? Oliver argues that Japanese Prime Minister Shinzō Abe's visit with the president represents how everybody feels – and he's totally right — because of the handshake. Trump grabs onto the prime minister's hand and then doesn't let go, he just pulls hard and smiles wide. And then keeps pulling and even smiling wider. That's kind of what he's doing with the country too.

Oliver called it "comically long and marathon-like." Then after Trump finally lets go, a wave of relief comes over Abe's face. "I feel you, I feel you," Oliver empathized. "That is the prime minister of a country known for awkwardly long formal displays of respect, and even he is going, 'Oh, f*ck this sh*t.'"

Evidently this isn't the first time that Trump has overdone it shaking hands. The team at Last Week Tonight put together a video of him entitled, "Donald Trump Can't Shake Hands Right." It's 40 seconds of terrible handshakes with everyone from Vice President Mike Pence to police officers, rally goers, and tech executives. Most seemed rather alarmed when their arms are nearly pulled from their sockets. And it's comedic brilliance.

Only Abe's made news of its own, though. Headlines around the world called the exchange "awkward," timed it at 19 seconds, and emphasized what looks like a grimace on Abe's face afterwards.

Luckily, the incident hasn't ruffled any diplomatic feathers. Trump still went ahead and played golf with his Japanese counterpart, after all. Perhaps just in case there were other awkward handshakes — or less than stellar swings — Trump had the windows of the journalists' rooms at Mar-a-Lago, where the two played, covered in black plastic.

If the golf game was anything like the handshake, you've really got to feel for the guy.