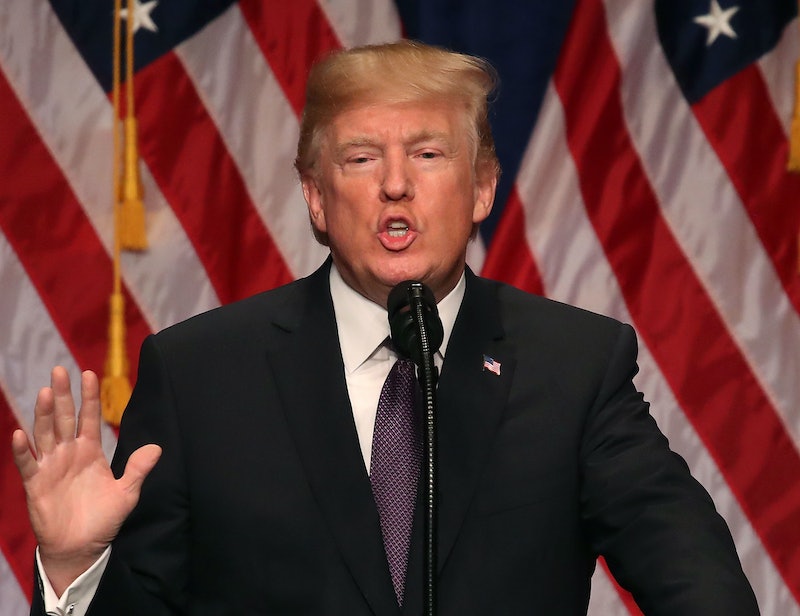 President Donald Trump will be delivering his first State of the Union (SOTU) speech on Tuesday night. According to The Washington Post, Trump is using the SOTU to fundraise for his election campaign in 2020. On his official website, Trump now has a fundraising solicitation which says:

This is a movement. It’s not about just one of us. It’s about ALL of us. Which is why your name deserves to be displayed during tonight's speech.

Supporters of the president can now have their name plastered on live TV after they donate to his fundraising campaign. On the website, the amount ranges between $35 at a minimum and $2,700 at the maximum level. But supporters can type in their own preferred amounts between the range in the "other" box on the solicitation website. Supporters can make a monthly-recurring donation if they want, too.

Later on, as media reports took notice of Trump's solicitation website, the question of how much one could pay surfaced. This was clarified by Trump's son, Eric Trump. While responding to CNN, he said that people can also give as low as $1 to his father's fundraising campaign. In his own words:

Even if you choose to only give $1, the proof of your support will send shockwaves around the world as they see every American who proudly stands behind our President. So before the speech, make your contribution of just $1 to have it displayed right under the live stream of the president's State of the Union.

While fundraising during a State of the Union address isn't exactly illegal, some observers say that it seems unethical and even tacky. Robert Weissman, the president of the Public Citizen organization, told USA Today, "Donald Trump is commercializing and corrupting yet another national institution, making this just the latest disgraceful degradation by Trump of the presidency and our public institutions." He added, "If Trump is going to do this, we at least should have truth in advertising: 'This presidency is brought to you by Goldman Sachs, Dow Chemical, Koch Industries and coal baron Robert Murray.'"

A similar opinion was held by Fred Wertheimer, head of the non-profit network Democracy 21, who told the same publication, "I have never heard of anything like this. It is a no class, money-grubbing misuse of the State of the Union address that is way beneath the dignity of the presidency and the occasion."

It's worth mentioning that Trump's offer to air donors' names comes with a necessary caveat. The names of those who have donated to this campaign will air on the president's campaign's live stream. Those names won't show on other live streams elsewhere. What's more is that it isn't unclear so far if Trump's campaign has made this abundantly clear to his potential donors.

At this moment, this fundraising detail about Trump's State of the Union address is the first eyebrow-raising one. But Joshua Spivak, senior fellow at the Hugh Carey Institute for Government Reform, said that Trump's address could be even more volatile and unpredictable. Spivak wrote for CNBC News and said, "Trump with his penchant for stirring up bitter fights with both Democrats and Republicans, may actually be able to turn the State of the Union into a must-watch affair."

On social media, some observers reacted to Trump's fundraising news with concern and disagreement. One person tweeted, "Any ethics issues raised by Trump's re-election campaign fundraising off an official White House event? Displaying campaign donors during #SOTU seems like it takes the blurry line between candidate & president to another level."

By the looks of the reactions online, Trump's solicitation website seems to come across as incentivizing donor support with a visual shout-out on air. To some observers, this manner of saying "thank you" to supporters is pretty questionable.