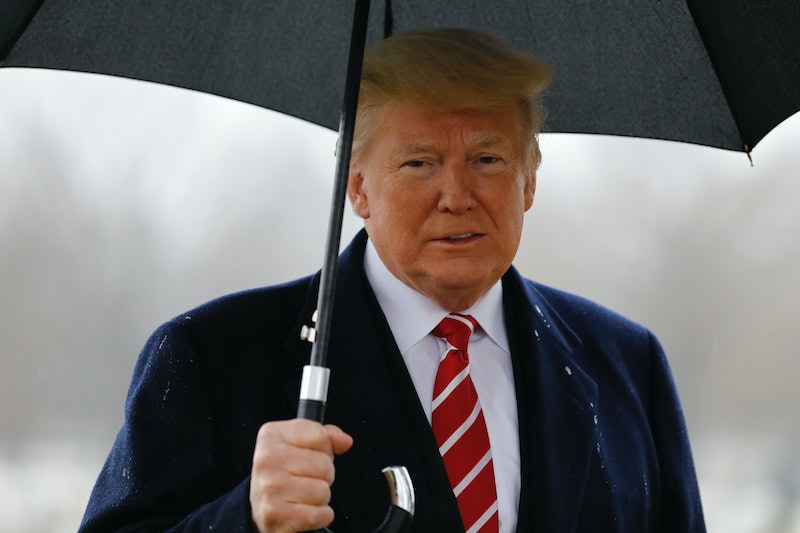 As a fight for border wall funding agitates Congress, a ludicrous exchange about the funding is occurring online this week. It started when someone launched a GoFundMe to raise money for President Donald Trump's wall dream. Now two projects have been created in response: The Trump wall GoFundMe has inspired campaigns for both ladders and an escalator to "get over" the barrier.

"Ladders to Get Over Trump's Wall" had already raised over $65,500 as of 8:30 a.m. ET on Friday by way of nearly 3,000 donors. "Build a Giant Escalator Over the Wall" had raised about $1,000 from around 70 donors. The projects' stated fundraising goals are astronomical — $100 million and $200 million, respectively. (Humorously large though the figures are, they're well below the original wall GoFundMe's stated goal of $1 billion.)

Of course, neither of these projects is actually trying to raise money for ways to climb over a border wall. The funds from both will be donated to the Refugee and Immigrant Center for Education and Legal Services (RAICES), a Texas-based nonprofit that offers legal services for refugees and immigrants. "This GoFundMe isn't really about ladders at all," the first project's page states. "It's about lifting people up."

The page notes that the idea for the project came from Twitter user @HoarseWisperer, who commented on its progress on Thursday. "I made a joke about crowdfunding money for ladders to defeat Trump’s wall," the user tweeted. "Now it has turned into a fun way to raise money for a great cause. ... A good deed. A good laugh."

The user also noted: "The fun is pretending we're seriously raising money to buy ladders to climb over Trump's wall though."

The escalator project page is also quick to note that the whole thing is a somewhat a joke. "The escalators are a metaphor," it reads, "please do not come and investigate me ICE or whoever I'm not really going to build a series of giant escalators."

There's at least one more trolling effort that's risen to take advantage of the wall crowdfunding project. Someone (according to the ladder GoFundMe page, it's Twitter user @NancyLevine) bought the domain gofundthewall.net. But it's not dedicated to raising money for the wall; visitors will find a link to the RAICES website.

The original GoFundMe for Trump's border wall is trying to raise $1 billion, and it was $11 million of the way there as of 8:30 a.m. ET on Friday. Of course, the wall is going to cost much more than that, based on U.S. Department of Homeland Security numbers, but GoFundMe limits the amount you can ask for to $1 billion. Project founder Brian Kolfage told Splinter News that he's "working to get [... the limit] raised."

One thing Kolfage doesn't mention on the GoFundMe page is his — as NBC puts it — "questionable news past." Kolfage used to run a group of sites, including the Facebook page "Right Wing News," that peddled conspiracy theories. Facebook ultimately took down "Right Wing News" as part of a purge of pages that were "ad farms using Facebook to mislead people" or "using fake accounts … to drive traffic to their websites," according to NBC.

One of the other sites Kolfage ran was "FreedomDaily," which was sued — along with other websites — by Joel Vangheluwe for falsely claiming that he was the person who'd driven a car into protesters at the Charlottesville "Unite the Right" rally, killing Heather Heyer.

Now Kolfage is apparently on to new projects, like this viral wall crowdfunding effort.

"I was really stunned when I heard of the border wall GoFundMe," Charlotte Clymer, the founder of the ladders project, told Business Insider. "More than being angry, I was sad at the blatant racism of donating money to a wall that will not be built, a wall that won't work." But, she added: "I've really been happy with how this has generated conversation on just the absurdity of the wall in general."