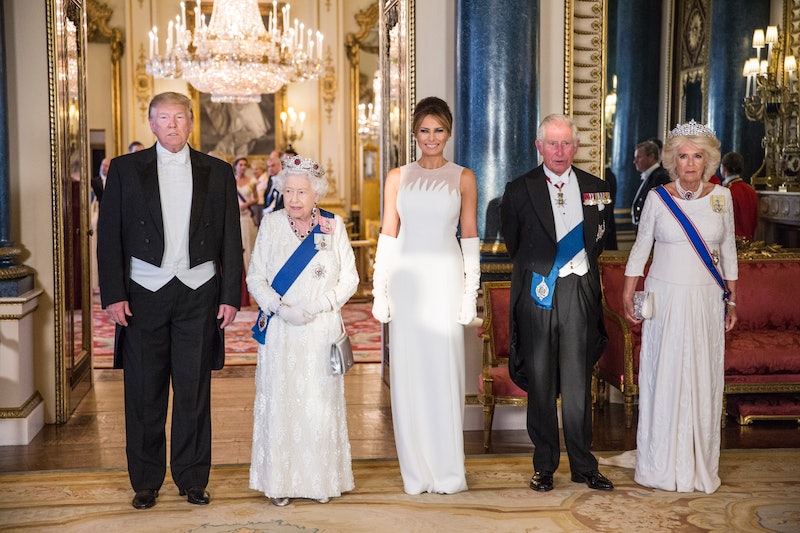 During state visits, it's often customary for heads of state to exchange gifts. But with the world watching — and foreign relations always at play — those gifts often carry some type of important symbolism. In keeping with this, the Trumps' gift to Queen Elizabeth during their June trip to the United Kingdom also had a special meaning, reflective of the history between the two countries.

The first lady's office reports that President Donald Trump and his wife, Melania Trump, gave the queen a Tiffany & Co. silver and silk poppy brooch inside a custom White House wooden jewelry box in a red leather box. For her husband, Prince Philip, the Trumps gifted a personalized Air Force One jacket, as well as a first-edition signed autobiography by James Doolittle, I Could Never Be So Lucky Again.

The poppy flower, Town & Country reports, is often used a symbol of the sacrifice of war, and in particular, those who died in the First World War. Although a significant totem in and of itself, the Trumps are also visiting on the eve of the 75th anniversary of D-Day, which marks the invasion of Normandy in 1944. They are both expected to help commemorate the anniversary this week.

The gifts that the Trumps bestowed upon Prince Philip are also symbolic. Also known as the the Duke of Edinburgh, Prince Philip is, among other things, the Marshal of the Royal Air Force, per CNN. Additionally, he fought in World War II, having joined the Royal Navy in 1939, according to the BBC. Town & Country reports that he is also a pilot — making the gifts he received from the Trumps symbolic on several levels.

Gift giving among heads of state is taken very seriously. CNN reports that POTUS and FLOTUS work with the State Department when deciding what kind of present would be the most appropriate and significant during such occasions. Melania reportedly took a special interest in the gift selection for this trip.

However, the occasion was not without snafu. InStyle reports that, during a tour of Buckingham Palace, Trump inadvertently revealed that he had forgotten about the gift he gave Queen Elizabeth the last time he visited. The InStyle report points to a tweet posted by The Sun's royal correspondent, Emily Andrews.

"Trump was also shown the pewter horse that he’d given the Queen last year in his visit to Windsor," Andrews wrote. "He was asked if he recognised it and he said “no”!"

However, FLOTUS reportedly stepped in to help, per Andrews.

"Melania came to his rescue and said, 'I think we gave that to the Queen,'" Andrews wrote.

Below the pewter horse, per InStyle, is a plaque that indicates not only who the gift was from, but when it was given. The description, InStyle reports, reads simply: "American Pewter Thoroughbred' Presented to Her Majesty Queen Elizabeth II by Donald J. Trump President of the United States of America and Mrs. Melania Trump on the occasion of their visit to the United Kingdom July 13, 2018."