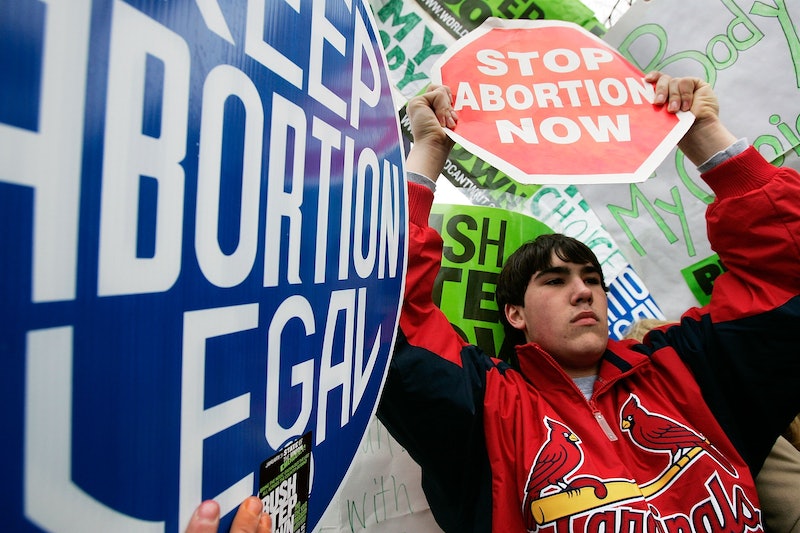 It was widely reported two weeks ago that Missouri was in the process of passing a bill that, among other things, would overturn a St. Louis ordinance preventing housing and employment discrimination based on "reproductive health decisions," meaning employers and landlords could discriminate against women based on whether they use birth control or whether they've had abortions. The Associated Press, Newsweek, Feministing, and Bustle all reported that the legislation in question, Missouri Senate Bill 5, undid the ordinance protections against discrimination based on reproductive health decisions.

However, as the bill gained notoriety, the architects of the legislation are speaking out, saying that the piece of law has been widely misinterpreted.

I don't know who originally began pushing the false narrative that this bill would allow women to be fired for using birth control but it's false and dishonest.

The St. Louis ordinance in question, which has been in effect since February, makes it illegal for employers or landlord to discriminate against women for their reproductive health choices. Earlier in June, Greitens referenced the ordinance while on a tour of an anti-abortion pregnancy center:

We had some radical politicians in St. Louis who passed legislation to make St. Louis an abortion sanctuary city, where it would make it illegal ... for organizations like Our Lady's Inn and other pro-life groups just to hire pro-life workers. So we're out here to protect pregnancy care centers.

The St. Louis Post Dispatch reported at the time that it was unclear whether Missouri legislators would repeal the entire anti-discrimination ordinance or just make it non-applicable at pregnancy centers. It's also important to note that the bill is still being debated, with both the House and the Senate adjusting it to suit their needs.

Briden also said that the bill "would prevent any city from interfering with pregnancy care centers and ensure that no one is compelled to participate in an abortion directly or indirectly."

St. Louis Alderwoman Megan Green, who sponsored the anti-discrimination ordinance, tells Bustle that when Greitens first called for the special session, he said he was calling it specifically to preempt that ordinance and to pass additional Targeted Regulation of Abortion Providers (TRAP) laws. Alderwoman Green says that as the bill stands right now, she's not concerned about its potential to allow the discrimination her ordinance sought to protect women against: "It does not seem to do anything to our local ordinance."

Briden does not deny that the bill would undo parts of the St. Louis ordinance, but tells Bustle that it "preempts" the ordinance in four specific areas:

(1) alternatives to abortion agencies; (2) requiring participation in an abortion against a person's religious beliefs; (3) requiring someone to participate in a real estate transaction with (i.e., renting a building to) an abortion facility; and (4) requiring an employer to cover abortions in health insurance plans.

This means that the brunt of the focus is on protecting those who do not want to rent land or space to clinics that provide abortions and employers who do not want to have to provide insurance plans that cover abortions. However, health insurance programs through the state exchanges already do not cover abortion unless a woman's life is endangered and public employees only have abortion covered if their lives are endangered.

"St. Louis employers and property owners should still expect it to be their legal duty not to discriminate against people based on their reproductive choices."

Briden also said that the bill "would prevent any city from interfering with pregnancy care centers and ensure that no one is compelled to participate in an abortion directly or indirectly." It is worth noting that "participation" could be widely interpreted.

Briden said it is up to the Senate, but added, "We are encouraging them to move quickly."

In an interview with Bustle, Washington University Law Professor Elizabeth Sepper concurs, saying that she believes that crisis pregnancy centers are the focus of this law. Moreover, she points out that under federal law, an employer with 15 or more employees cannot discriminate based on reproductive choices, such as taking contraception, being pregnant, or having an abortion. Thus, any employer with 15 or more employees — in the state of Missouri or otherwise — must follow the federal anti-discrimination standards. She adds that, "The Missouri bill does not seem to overturn the St. Louis ordinance in any meaningful way," she said. "St. Louis employers and property owners should still expect it to be their legal duty not to discriminate against people based on their reproductive choices."

The bill will no doubt be adjusted again before going to a final vote, which will not occur until after the July 4 recess. Briden said it is up to the Senate, but added, "We are encouraging them to move quickly."

Bustle has posted the most recent version of the SB 5 below, with additional house amendments in the meantime.

Celia Darrough contributed to this report.

More like this
'The Capture' Is Finally Back – & S2 Looks Tense AF
By Sophie McEvoy and El Hunt
The Lionesses Are Calling For Equal Access To Football In Schools
By Sophie McEvoy
Gassed Up Promises All Things Action, Risk, & Redemption
By Frances Stewart
Ben & Jerry’s & Tony’s Chocolonely Are Launching 4 Responsible New Flavours
By Sophie McEvoy
Get Even More From Bustle — Sign Up For The Newsletter