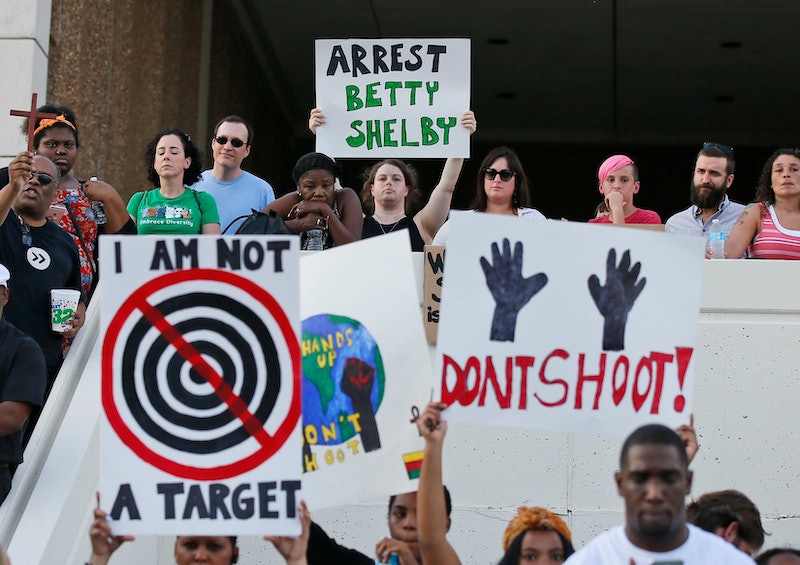 More than a year after being acquitted of first-degree manslaughter, one former Tulsa, Oklahoma police officer Betty Shelby is teaching officers how to survive "The Ferguson Effect," or what she calls the after-effects of being accused of shooting an unarmed suspect. It's named for the city in Missouri where police officer Darren Wilson shot unarmed 18-year-old Michael Brown in 2014.

When asked by Tulsa-based ABC affiliate KTUL to define "The Ferguson Effect," the former Tulsa police officer said it's "when a police officer is victimized by anti-police groups and tried in the court of public opinion."

Shelby is now working as a deputy for Rogers County Sheriff's Office. In May 2017, Shelby was acquitted of first-degree manslaughter in the 2016 shooting of 40-year-old Terence Crutcher.

"I have a class that I teach to officers to give them the tools to survive such events, and it's a way of surviving financially, how to survive legally, emotionally and physically," Shelby told KTUL in May.

On Tuesday morning, Shelby presented her course "Surviving the Aftermath of a Critical Incident" to the Tulsa County Sheriff’s Office, according to The Washington Post. There were protests on Monday, according to local news reports.

In response to the protests, Shelby told KTUL that she "faced many challenges" after the Crutcher shooting, and she wanted to help other officers.

She told the television station that she does not discuss the shooting in her class.

The Oklahoma Council on Law Enforcement Education and Training's website describe it as a four-hour class. The course description reads: "This course will describe some of the challenges in dealing with the aftermath of a critical incident such as an Officer involved shooting. Participants will be exposed to many of the legal, financial, physical, and emotional challenges which may result from a critical incident in an effort to prepare LEO’s for the aftermath."

Marq Lewis, leader of the civil rights group We The People Oklahoma, told the Tulsa World that a class on deescalation tactics should be offered instead. "We applaud [Tulsa County Sheriff's Office] for giving officers a class to address their own mental health from an obviously stressful job, but we do not believe Betty Shelby is the right person to teach that course," Lewis said in a statement to the World.

Shelby's attorney Scott Wood told the Tulsa World that the class will focus on planning strategies for officers. "The class is instruction to officers on how to plan, fiscally and mentally, for a critical incident similar to the one she was involved in in September 2016," Wood told the newspaper in a statement. "Betty will receive no compensation for the class. Betty is, continues to be, and will always be a faithful public servant."