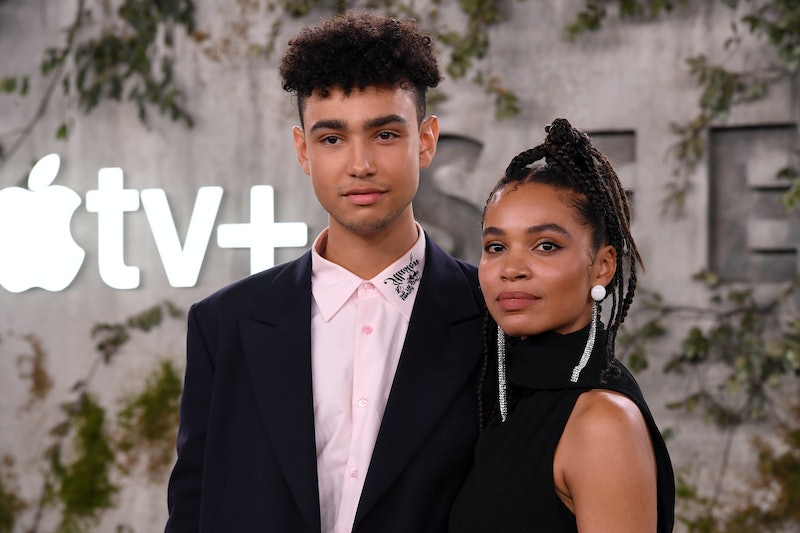 Spoilers ahead for See Season 1. Although they're born in the pilot episode, by Episode 2 of See, the twins are already teenagers ready to explore the world. Over the course of episode 2, "Message In A Bottle," Kofun and Haniwa are seen at 3 years old (played by Lamine Quiqui and Hayven Oladapo), 7 years old (Dominic Mariche and Jordana Blake), and 12 years old (Jaeden Noel and Millie Davis) before the teenage versions played by Archie Madekwe (Midsommar) and Nesta Cooper (Travelers, The Edge Of Seventeen) are introduced.

The premise of the series is that the twins' biological father is a man named Jerlameral who possesses the sense of sight in a world in which people have been blinded for centuries. Because he can see, he is constantly being hunted by Queen Kane and deemed a heretic. This is why he sends Maghra, the twins' mother, away. She ends up wandering into a village run by Jason Momoa's character Baba Voss. He marries her and takes the children in.

In Episode 2, Baba Voss meets Jerlameral who has been lurking in the woods trying to keep tabs on them. He gives him a box of books to take back to the children that they are meant to open when they are teens, along with a message to find him when they are ready. By the third episode, "Fresh Blood," the two have long since opened the box and have a deep understanding of the geography of the world, how to make a bow and arrow, genetics, and the socio-economic history of a "mythical land" known as Pittsburgh.

Kofun enjoys reading the books but shies away from asserting his knowledge over his father. Haniwa, meanwhile, is proud to show off her new weapons, promise her father she can catch a couple deer, and contemplate the fact that she could take over the her entire tribe one day, given that she knows that most of the things her people consider mythical or "from the gods" are just... science. Her father chides her for being proud and urges her to keep er "book words" to herself. The look in her eye early on suggests that she has no intention of doing that as the series moves forward. But that plan is thwarted early on.

With their knowledge, and their sight, Baba Voss decides to take the twins away to a festival where they will meet (and possibly mate) with "fresh blood," given that too many Alkenny babies are born out of incest. Once there, Kofun is captured in the night with other children and taken away. Not only is he enslaved, but he also has to watch his gait and pretend that he, too, is blind, so that they don't burn him at the stake for being a witch. Baba Voss, the Alkenny who attended the fair with them, and Maghra all embark on a journey to find him.

That journey, though, might land them right at Queen Kane's door. And that won't bode well for anyone, whether they can see or not.