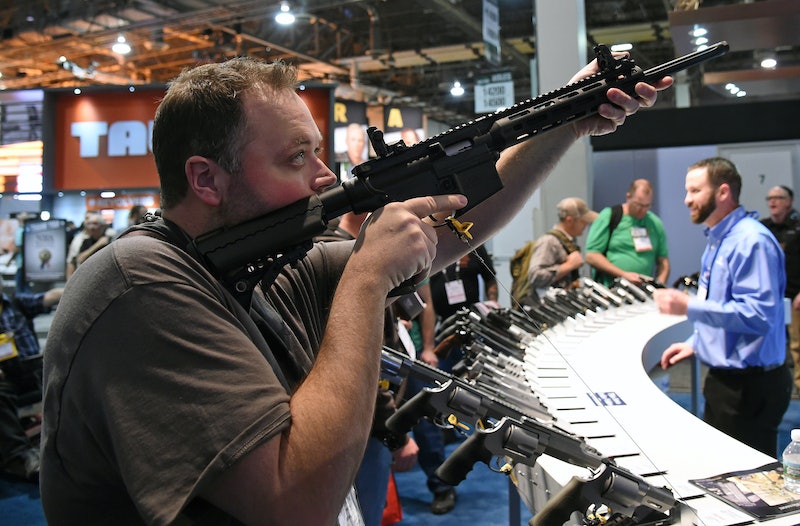 A misspelling in a hashtag has weirdly enough become the next source for hurling insults in the gun control debate. After #LasVagasShooting started trending on Twitter, both those who favor gun control and those who oppose it took to the social media platform to question the other side's intelligence. Users have already published at least 35,000 tweets using #LasVagasShooting hashtag. A hashtag on Twitter becomes an autofill suggestion after someone first creates it and it becomes popular, especially if it starts trending. #LasVagasShooting, which might have started as one user's innocent typo, has now grown and morphed into a partisan battleground for two main purposes. One, the main reason, to debate gun control. Two, on a smaller scale, for people on one side of the political spectrum to accuse the other side of not knowing how to spell.

Following the mass shooting in Las Vegas on Sunday, an incident which left 59 dead and more than 500 injured, there has been an outcry for stricter gun regulations, such as expanded background checks or a wider ban on assault weapons. Critics opposing these measures argue that tighter regulations won't prevent shootings and that access to guns is part of their 2nd Amendment right.

Police found suspected gunman Stephen Paddock, a Mesquite, Nevada resident, dead in his 32nd-floor hotel suite with the 23 guns he smuggled into the Mandalay Bay Resort and Casino. Prior to the break-in, the shooter opened fire on a crowd of people at a country music festival on the Las Vegas Strip. Despite claims otherwise from extremist group ISIS, the FBI say the 64-year-old suspect has no ties to organized terrorism. Investigators found an additional 19 guns, thousands of rounds of ammunition, and explosives in Paddock's Mesquite home. Paddock was a high-rolling gambler, recent transactions show. His brother told news outlets that Paddock had no history of political or religious affiliation, or of mental illness. Paddock also obtained all of his guns legally.

The Las Vegas Strip has turned into a vigil for victims, both on the street and on lit-up casino displays. The National Rifle Association, NRA, has gone silent on the Las Vegas shooting and not offered a comment on the tragedy. It's usually frequently updated Twitter, Facebook, and website were dormant on Monday. Richard Feldman, a former NRA lobbyist, told Politico that the NRA's first priority is to learn more about the shooter before they craft a strategic response — a similar move to what the organization has done for past shootings.

Politicians, including President Trump, have given public statements offering sympathy, but sleuthing reporters are pointing out which of those members of Congress also took money from the NRA. Anyone can find beneficiaries of the NRA through OpenSecrets.org.

Meanwhile, as firearm activists argue over social media, White House press secretary Sarah Huckabee Sanders said at a news briefing “there’s a time and place for a political debate, but now is the time to unite as a country.” Sanders said it would be premature to discuss policy before all the facts about the event are known. A major mass shooting, where more than four people are killed, has occurred on average every 72 or so days since 2010, according to the Gun Violence Archive. The Las Vegas mass shooting is one of deadliest shooting in recent U.S. history, following the June 2016 shooting at Pulse nightclub in Orlando, Florida.