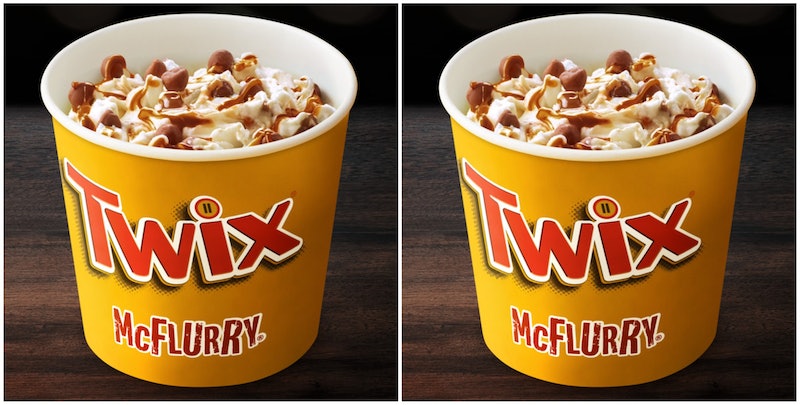 Excellent news for ice cream lovers across the pond: The Twix McFlurry is back at McDonald’s in the UK. Is it still the dead of winter? Yes. Is it okay to eat ice cream anyway? Absolutely. Especially when it has little bits of crunchy, chocolatey, caramel-y goodness blended all up with it. Happy Thursday, everyone. It’s almost the weekend. Treat yourself.

Fun fact: The McFlurry was invented not on McDonald’s home turf in the United States, but further north. That’s right — it’s Canadian. McDonald’s franchisee Ron McLellan created the dessert at a McDonald’s in Bathurst, New Brunswick in 1995; now, nearly a quarter of a century later, it’s available on the menu of the House of the Golden Arches in a whopping 99 countries. The McFlurry, it seems, is just one more item on the long list of wonderful Canadian things that we absolutely do not deserve. Like Ryans Gosling and Reynolds. And poutine.

Anyway, the Twix McFlurry in particular tends to come and go on the wider McFlurry menu — it’s rarely there permanently, but it makes an appearance from time to time. This time, it seems to be limited to the UK, which is unfortunate for those of us here in the United States (e.g. me); described as “soft dairy ice cream swirled with Twix chocolate-coated biscuit pieces and chocolate caramel sauce,” it’s basically everything I look for in an ice cream sundae. Available in two sizes — mini and regular — it’ll set you back either 99p or £1.39 (about $1.30 to $1.82 USD). Act fast, though; they’ll only be around until March 19, according to the Sun.

But the balance of the dessert universe must be maintained, so with the arrival of the Twix McFlurry comes the departure of another limited-edition ice cream treat: The Galaxy McFlurry. According to Cosmo UK, the Galaxy McFlurry — so named for its use of Galaxy chocolate as the punctuating ingredient — made its way to the McFlurry menu early in January; however, Jan. 31 is the last day for it, so if you miss it today, you miss it forever (or at least, until its next resurgence).

Then again, though, people don’t seem to be especially bothered by the loss of the Galaxy McFlurry. It seems the idea of a Twix one is much more exciting to the general public:

But what if you’re not in the UK? What if you’re stuck here in the United States? Well, you’ve got a few options. We do still have McFlurries — just not the Twix kind. Right now, the Oreo McFlurry is the reigning champ in the U.S. McDonald’s menu, so if cookies and cream is your jam, that’s readily available. If you’re willing to go somewhere else, Dairy Queen’s Blizzards are somewhat similar to McFlurries (although obviously not exactly the same). The Salted Caramel Truffle or Turtle Pecan Cluster Blizzard might give you the chilly, caramel kick you’re looking for. Or, you could always DIY your own McFlurry: Get some vanilla ice cream, crumble up some Twix bars, mix it all together, and top it off with caramel sauce. Mission accomplished.

If you’re in the UK, you can find your nearest McD’s location here. Plz send pics of your Twix McFlurry. It would be a kindness to let those of us elsewhere live vicariously through your dessert options. Many thanks in advance.