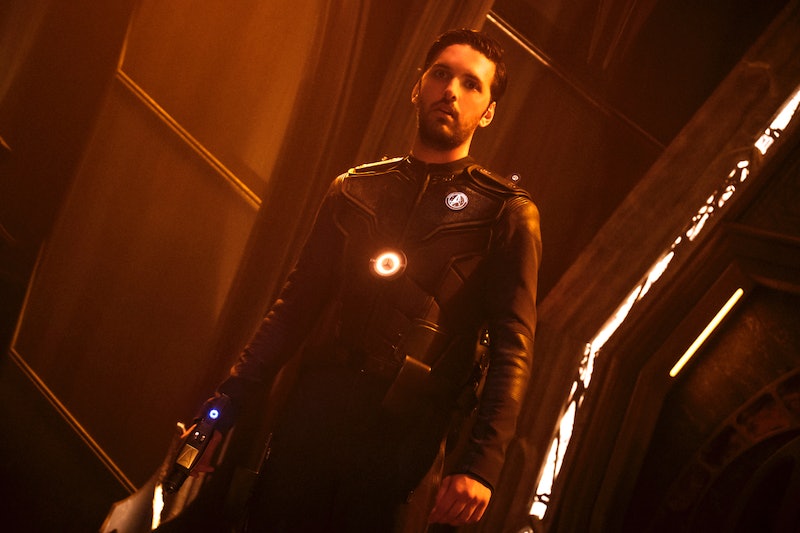 It's hard not to feel for Lieutenant Ash Tyler on Star Trek: Discovery (staff writer: Kirsten Beyer). His storyline took a turn in the Jan. 14 episode, "The Wolf Inside," that was more bizarre than even fans with the boldest theories might have expected. Speaking at Bustle HQ in advance of the episode, actor Shazad Latif reflected on that Voq twist on Star Trek: Discovery (costume designer: Gersha Phillips) and how the "power of love" might be what ultimately saves him.

In one of the biggest shockers of the show's debut season, fans were forced to reconsider everything they thought they knew about Latif's character. Using some horrifying surgical means, L'Rell (Mary Chieffo) inserted her colleague and lover's consciousness into Tyler when the lieutenant was a Klingon prisoner, thus creating the perfect spy to install in a Starfleet vessel. That's why some of his memories have been painful and confusing — it was Voq's mind trying to break free.

"His memories have been layered over Voq," explains Latif, "but [something's] stopping Voq from activating."

The popular fan theory that Tyler is Voq that may or may not have crossed your digital inbox turned out to be correct. Well, to borrow a phrase from another science fiction franchise, it was correct "from a certain point of view." Tyler was not a Klingon in disguise. Voq has been dormant inside of Tyler for some time. As Dr. Culber had determined in the previous episode, Tyler was not only tortured, but physically modified in some way. Somehow, Voq is inside him, and now the Klingon has taken over.

"I had to keep the secret for a year, basically," Latif says. "So it's been crazy trying to not talk about it." While Tyler showed up mid-season, Latif has secretly been on the show since the very beginning. Actor "Javid Iqbal," who has been credited as Voq, does not exist. Latif plays both parts.

"It's more in the execution anyway," says Latif about how some fans were on to them from the start. "You can guess certain things." He cites Westworld (creator: Lisa Joy) as an example of fans mining series for clues to possible reveals. "Everyone always guesses things," the actor says. "But [the value is] how it plays out."

So was there really an Ash Tyler, and will there ever be an Ash Tyler again at some point? That's a tricky question without a simple answer. Surely Captain Lorca wouldn't accept an unidentified POW onto his ship — right? There must be records of Tyler somewhere. Plus, both bodies were in surgery together. If the Klingons created a human shell body out of nothing, that would be wild.

Whether or not the series can bring Tyler back as himself is another story, but is seems possible. Just add him to the list of crew members in dire need of science fiction miracles right now, along with Stamets and Dr. Culber. Give them all spores, or something.

Even more promising than spores, perhaps, is the love that Tyler feels for Michael (Sonequa Martin-Green). Before Voq took over Tyler's body, Tyler was talking about how Michael tethered him to his human self. "It's that 'power of love' thing," Latif says. "It's him and Burnham [that] kept him alive, almost. Because it was supposed to be very easy. L'Rell's plan was supposed to be executed very simply."

Except of course, for the fact that L'Rell and Voq seemed to be romantically involved too. That's not ideal for all parties. It's common for television shows to have love triangles, or squares, but the existence of two selves in one physical form raises the stakes a bit. Latif describes the predicament as "this double love story in one body," with "each [relationship] equally justifiable."

This dire situation also puts Tyler in a different position compared to his crew mates as they navigate the dystopian alternate reality they've recently landed in. "Everyone's going to meet a different version of themselves," Latif says about the Mirror Universe. "A bit darker. For me, it's sort of the reverse. I'm already in that place and then [...] my mirror character is another Voq."

Upon meeting the Mirror Universe version of his Klingon half, a rebel known as the "fire wolf," the real or original Voq inside of Tyler breaks free. Not only does he recognize himself, but Voq is horrified at a version of events in which Klingons are leaders in something that very much resembles the Federation, rather than separate from it. Now the two characters — three if you count mirror rebel Voq — that Latif has been playing are finally clear.

When we first met Tyler, he was a prisoner of war struggling with his own mental health that seemed to be getting worse — specifically when he was around L'Rell, who became a prisoner on the Discovery. Her manipulation of him is a decent metaphor for Post-Traumatic Stress Disorder with an added science fiction element. Not only does being around his former assailant bring back flashes of being assaulted, but she's trying to literally trigger her plan and awaken Voq within Tyler.

Even though fans now know that some of Tyler's traumatic memories are not actually his own, the show has still done an impressive job showing the lasting effects of this kind of trauma.

"The med bay scenes are my favorite to film," says Latif, "because it's just about characters being vulnerable. It's not me playing the action hero dude. You're seeing a man in a vulnerable place." Granted, Tyler's last med bay scene ended with a dramatic neck-snapping, but those were special circumstances. The show's commitment to exploring mental wellness is admirable, especially — Latif thinks — with its male characters.

"You can see him be weak," adds Latif, "and crying, and upset. It's exploring that side of masculinity and just exploring the self in that way."

This Voq reveal doesn't diminish Tyler's trauma, and it's still important to see characters and storylines like this — especially in this genre. "The best sci-fi films," the actor says, "are the ones that explore the human condition in a heartfelt way." Interstellar (costume designer: Mary Zophres) and Arrival (casting: Francine Maisler) Latif notes, are about family. "You need that," he says, "otherwise it's just running around and shooting lasers. Which is great, but you need that dose of pain or suffering."

Star Trek: Discovery is giving fans the depth that that "pain and suffering" provides, but with some sci-fi twists that have been the signature of this classic franchise.