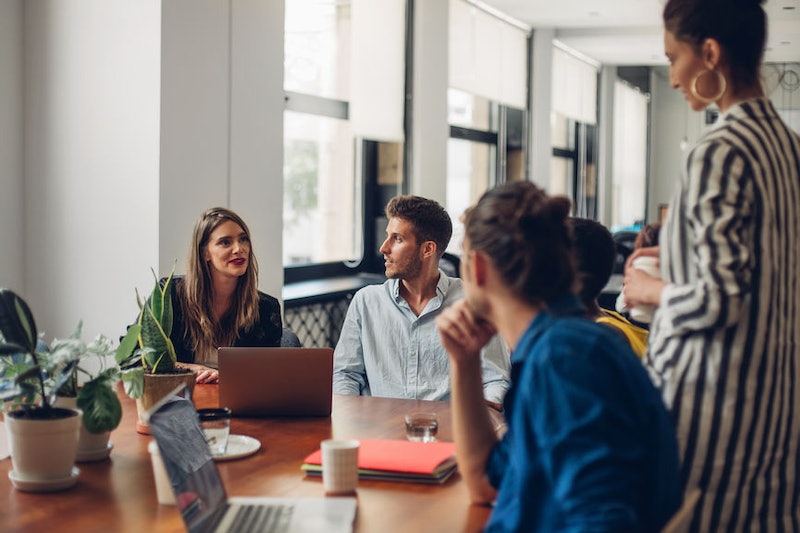 The gender pay gap is still one of the most visual indicators of gender discrimination in the workplace. It feels unbelievable that, in 2019, we are still talking about women getting paid less on average than men. However, campaigners have worked tirelessly to call employers out and hold them to account, encouraging more women into male dominated fields and smashing glass ceilings. But is the gender pay gap disappearing? Research has found that the gender pay gap in the UK has narrowed slightly over the last three years. A study sent to Bustle by Glassdoor Economic Research, a site that shares insights into today’s labour market, reveals that the gender pay gap is closing slowly but surely in the UK, but there is still a lot of work to be done to eradicate it completely.

Using data provided by Glassdoor users, the site estimated what the gender pay gaps are in the United States, the United Kingdom, Canada, Germany, France, the Netherlands, Singapore, and Australia.

Sadly (but unsurprisingly), the research found that a gender pay gap persists around the world. In each of the eight countries, men earn more than women on average. And, after researchers took into account variables such as age, industry, location, and job title, the gender pay gap was still an issue.

However, there is a glimmer of hope. While an unadjusted pay gap between men and women in the UK persists at 17.9 percent, meaning women earn an average of 82p to every £1 earned by a man, this figure does represent a five-percent-point shrink since 2016, when women earned an average of 77p for every £1 men earned. The study found similar results around the world.

Speaking about the reasoning as to why the gender pay gap may slowly be closing, Glassdoor Chief Economist Dr. Andrew Chamberlain said: "Over the past three years, company leaders, politicians, celebrities and more have called for an end to the gender pay gap. Glassdoor’s comprehensive study put those words to the test to reveal that slight progress has been made to close the gap." He continued:

"Though a promising sign, it should not detract from the larger fact that significant pay gaps remain around the world, even after controlling for workplace and job factors."

Within the study, Glassdoor stated that "occupational and industry segregation continues to be the largest driver of the gender pay gap in the U.S." This reveals that certain industries and jobs are still dominated by men, which has a big affect on the pay gap.

There has been a massive push over the last decade to encourage girls to take STEM subjects and, thankfully, it's now less common for jobs adverts to come across as overtly gendered. But this kind of progress must continue, and move faster, if the gender pay gap is going to be closed in our lifetime.

More like this
Women Around The World Are Cutting Their Hair In Solidarity With Mahsa Amini
By Darshita Goyal
Black Women's Equal Pay Day Highlights An Upsetting Problem
By Brandi Neal
Deliveroo Is Selling Lotus Biscoff Cinnabons Now
By Darshita Goyal
Where Is Former Bachelor Host Chris Harrison Now & What Is His Net Worth?
By Hugh McIntyre
Get The Very Best Of Bustle/UK