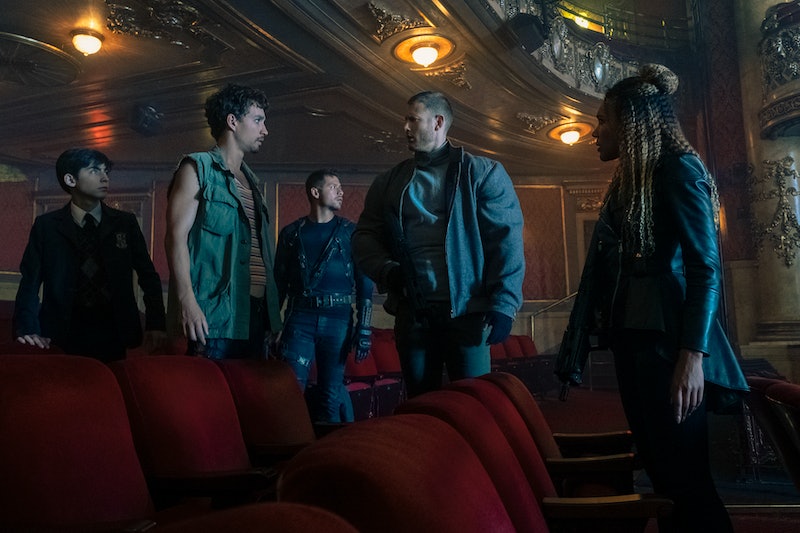 After Vanya blows a hole in the moon (oops), it seems like the plan is for the team to go back to an undetermined place in time and try to prevent their sister from causing an apocalypse. The siblings gather around Five so that he can use his power to Blue-skidoo them the heck out of there, and they vanish. Where they are or what time period they're in now, we don't know.

For a moment, just before they disappeared, the Hargreeves all became children again too — which is concerning, due to Five's condition. What if they're all stuck in their younger bodies, like him, in Season 2?

"The truth is we don't know where they are," showrunner Steve Blackmon told The Hollywood Reporter in a post-mortem interview. "We don't know what happened to them. I wanted this to really be the best of cliffhangers, in that you're like 'Wait, what? What happened?' It gives us a lot of openness and legroom to tell the best story we can next year. But yes, the apocalypse is not solved."

Deviating slightly from the comics, the Hargreeves did not save the world. "To me it was the right Netflix cliffhanger," Blackmon continued. "You really want people to go into the off-season saying, 'I gotta know what happened,"' and that will be revealed when — hopefully — you see Season 2."

Wherever the Hargreeves siblings end up in space and time, it's also unclear what "fixing" Vanya entails. Can they go back to the past and erase her childhood trauma? It's clear that Luther, by locking her in a cell that held her as a child, triggered her to a point of no return — evil silver eyes and all. Should they stop him from doing that, or go back even further? They could stop their adoptive father from ordering Allison to make Vanya forget her abilities. They could stop him from doping her with medication. What happened to Vanya had been building for years, and Season 1 only covered about a week.

Can the family erase all of their respective traumas while they're at it? Can they save Ben and Pogo's lives, too? Hargreeves treated Vanya the worst, but he was an abusive father to all of them, and it's affected their dynamic in the present. They're not a terrible team in the way that Marvel's Avengers keep saying that they can't work together, only to flawlessly save the day anyway. They're, like, actually not good at working together as adults. The Umbrella Academy family is so bad at communicating and executing plans that they basically destroyed the world while trying to save it.

Hargreeves may have thought his death would bring them back together, but it's saving their sister that ultimately united them for one last-ditch effort to avoid the apocalypse. Wherever the team jas ended up, let's hope they can figure out that teamwork thing if and when The Umbrella Academy returns for Season 2.