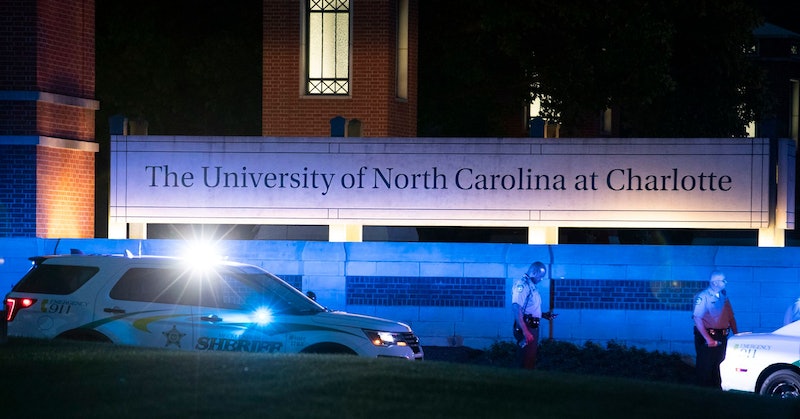 In what Chancellor Philip L. Dubois called the "worst day in the history" of the University of North Carolina at Charlotte, two people were killed and several others injured in a shooting on Tuesday. The victims of the UNC Charlotte shooting were students Ellis Parlier, 19, and Riley Howell, 21, USA Today reported. Four more were injured, according to UNC Charlotte Police Chief Jeff Baker, and as of Tuesday night, three of them were in critical condition.

According to Greenville News, Parlier, who was from Midland, North Carolina, graduated from the Central Academy of Technology and Arts in 2017 with a focus on information technology. Tahira Stalberte, a spokesperson for the high school, told Greenville News that Parlier's death was "very shocking."

"Our community is still in shock in dealing with this loss," Stalberte told the outlet.

Howell, the other student identified as a victim, was a graduate of T.C. Roberson High School and was active in sports while there, Citizen Times reported. He was from Waynesville, North Carolina, per the outlet, and had also previously been a student at Asheville-Buncombe Technical Community College.

Roberson soccer coach Josh Martin told Citizen Times: "You can’t really put into words what a good human being [Howell] was. ... There aren’t words to describe how we’re all feeling. This is tragic."

USA Today reported that officials said all those injured in the shooting are students. According to the Charlotte Observer, Charlotte-Mecklenburg police responded to reports of an active shooter in one of the campus buildings before 6 p.m. Police said in a press release that the two victims were "pronounced deceased on the scene," per the Observer. The shooting had put UNC Charlotte on a lockdown that stretched into the early hours of Wednesday.

In a statement about the shooting, Gov. Roy Cooper said it was a "tragic day at this great university, city of Charlotte and state of North Carolina." He also pointed out that the shooting took place on the last day of class this semester, and a few days before graduation.

"But I know the people in this community, and they will be here for each other," Cooper said. "We mourn the loss of life. We pray for those that are being treated at a hospital right now. And I'm here with resources from the state of North Carolina. I've talked with Chief Baker, I've talked with the chancellor, and I want this university and this city to know that the state will be there for them."

A suspect was taken into custody on Tuesday, the New York Times reported. Charlottesville-Mecklenburg police identified the suspect as a 22-year-old man. According to the Times, he was charged with two counts of murder, four counts of attempted first degree murder, four counts of assault with a deadly weapon, and discharging and possession of a firearm on an educational property.

Though he did not directly mention changing gun laws, Gov. Cooper's comments in his press conference on Tuesday were noted by gun control advocates. "I know that this violence has to stop," he said. "And as we deal with the aftermath in the coming days, we will take a hard look at all of this to see what we need to do going forward."

More like this
Read Dan Levy's Heartbreaking Message After The Club Q Shooting
By Stephanie Topacio Long
What To Know About Martin Bashir After Watching 'The Crown'
By Bustle UK
5-Year High School Reunions Vs. 10-Year High School Reunions
By Ginny Hogan
'Waterloo Road' Is Back, With More Than A Few Familiar Faces
By Sam Ramsden and Vivian Iroanya
Get Even More From Bustle — Sign Up For The Newsletter