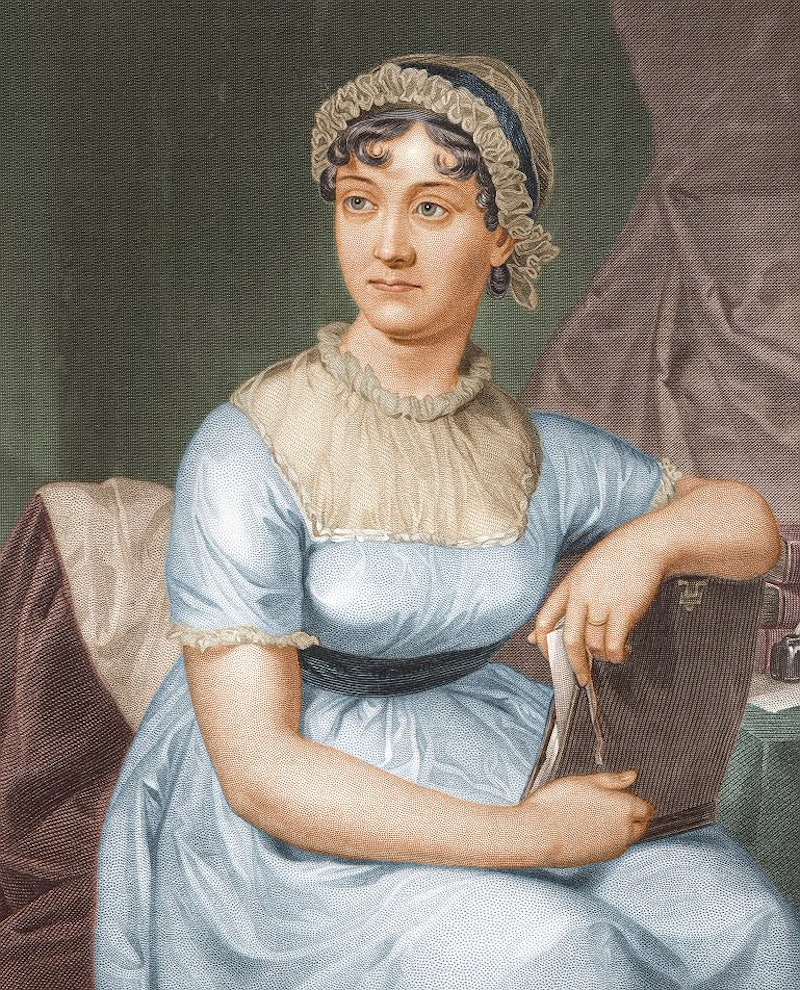 Anyone who wears Jane Austen-inspired costumes, whether it's for cosplay or for a film role, will tell you that wearing the undergarments are a key part to understanding the character. Which makes sense to me — after all, I know I've had that moment where I've felt instantly empowered after putting on a sexy pair of panties. And on the opposite end, I know how terrible it feels to wear a bad bra. Underwear is important.

Austen was born in 1775 and died in 1817, meaning she lived during the Georgian era of the Regency period. Her first book, Sense and Sensibility, was published in 1811, and her most popular work, Pride Prejudice, was published in 1813. At this time, underwear as we know it today did not exist, yet Regency ladies had a complex undergarment routine of their own.

And since female identity and power are major themes in Austen's works, it only makes sense to explore this particular facet of a lady's wardrobe. If you can understand a little more about what it felt like to be a woman during that time period, perhaps you can draw even more from the fierce female characters in Austen's works. (Plus, aren't you just curious??)

I set off on a quest to learn everything I could about the undergarments Jane Austen and her characters would have worn. And let me tell you, the details about this period in the history of underwear are positively fascinating.

First thing's first: panties weren't a thing yet. That's right, our girl Jane (and all of her bold heroines — I see you, Lizzie Bennett) were, by our modern-day standards, going commando. Austen was, in fact, alive right at a turning point for underwear. According to the Jane Austen Centre in Bath, "drawers" (which were like loose shorts, and often crotchless) were invented in 1806, but it wasn't common for adult women to wear them until after 1820. Drawers went on to merge into 'knickers" and "combinations" during the Victorian era, and modern "panties" didn't exist until the 1920s.

The bottom layer of Regency undergarments was the chemise. A chemise was similar to a long, short-sleeved shirt, which was meant to absorb all of a woman's sweat and oils. (Romantic!) Chemises could sometimes be the only undergarment worn, and in some instances, they were the only item of clothing that would get washed. Sometimes, women would also let the top of their chemise show in order to cover up their cleavage.

Did you know that bras were not invented until 1914? But don't worry, plenty was being done to keep a woman's breasts under control.

When you look into Regency undergarments, you hear a lot about stays. The term "stays" (or "a pair of stays") refers to the bodices that would come together to shape a woman's torso. Different kinds of stays were around before corsets, and sometimes stays were worn on their own informally, but during the 19th century the terms were often used interchangeably.

During the Regency era, the "short corset" was used, allowing women's natural hip-lines to show. The Jane Austen Centre provides an unbeatable description of Regency corsets:

Unlike Victorian corsets which hooked in the front and laced up the back, older corsets only laced up the back in a zigzag fashion using one string—cross lacing would be invented later on—and stiffened in the front with a carved wooden or bone busk which created a straight posture and separated the bosoms for the “heaving” effect, so popular at the time.

Ah, yes, who doesn't love a good heaving effect! The Regency period was known for a "shelf bustline," which is designed to make breasts look as if they're, well, sitting on a shelf for display. Ooh la la!

But the exposure of women's breasts was actually a little controversial. The blog Jane Austen's World has a a great, in-depth post about the Regency ideas about exposing the bosom. There were a variety of necklines that women could choose from during the period. During the day, dresses tended to be more modest, but at night it was fashionable to show a hefty amount of cleavage. Yet, many people "deplored" how much women's breasts were shown — which isn't really a surprise, since people have been complaining about women's appearances since the dawn of time. As we moved out of the Regency period, modest necklines became more standard, and the styles of the period were often poked fun at for being scandalous.

Apparently, Austen herself had some opinions about it all. She wrote in a letter to her sister Cassandra in 1813, "I learnt from Mrs. Tickar’s young Lady, to my high amusement, that the stays now are not made to force the Bosom up at all; that was a very unbecoming, unnatural fashion."

Becoming or not, corsets were definitely not comfortable. Women were prone to fainting from lack of oxygen, which is why items like smelling salts and vinaigrettes were common. Can you imagine spending all day in one of those things? (Though, author Laruie Viera Rigler argues that modern shapewear, like Spanx, isn't a far cry away.)

The final layer was, of course, the petticoats. Made of stiffer fabrics, petticoats were underskirts that hung from the waist that would help shape the dress away from the body. Petticoats also added a layer of warmth. Sometimes the outermost layer of petticoats would show underneath the skirt, and could protect the gown from being damaged.

At the time, dress fabric was so thin that if a woman wore a gown without the proper petticoats, the fabric would cling to her body, revealing her legs and shape of her nether-regions. Scandalous! There was some scorn shown towards Regency fashions for having fewer petticoats, and thus being risque, as shown in the satirical carving above from 1810. (Seriously, women can't catch a break.)

5. In Short, Regency Women Were Badasses

I mean, we already knew that characters like Elizabeth Bennet and Emma Woodhouse were forces to be reckoned with, not to mention Austen herself. But they were doing all of that, plus they were wearing a whole lot of undergarments. As someone who spends most of her days in yoga pants, I have to give them major props.

More like this
These Cheap Bras & Underwear On Amazon Are Actually Effing Amazing
By Karen Belz
Prince Harry Incorrectly Recites Christina Aguilera’s “Genie In A Bottle” Lyrics
By Jake Viswanath
I Read Prince Harry's 'Spare' So You Don’t Have To: 11 Highlights To Know
By Marina Watts
'Mayfair Witches' Already Changed 2 Major Characters From The Books
By Grace Wehniainen
Get Even More From Bustle — Sign Up For The Newsletter
From hair trends to relationship advice, our daily newsletter has everything you need to sound like a person who’s on TikTok, even if you aren’t.