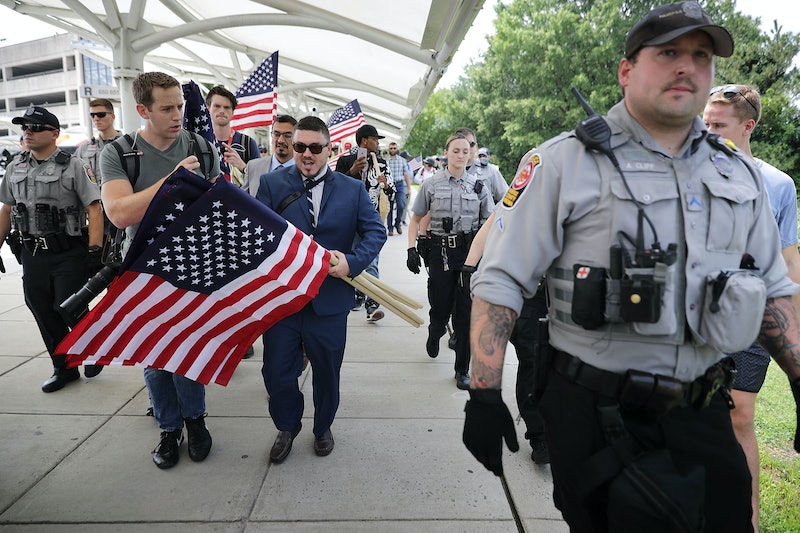 Police escorted Jason Kessler, who organized a white supremacist rally on the anniversary of the violent Charlottesville protests, and his few followers out of Lafayette Park, effectively ending Unite The Right 2 rally hours early, according to multiple reports. The white nationalists where heavily outnumbered by counter-protesters who gathered at Freedom Plaza to protest against the rally for "white civil rights."

Reports said police drove Kessler and his followers as well as some press away from the protest scene in a van. Video of the group arriving at a Metro station was later captured. "We ran them out of town," one counterprotester told the Huffington Post's Jessica Schulberg.

The rally was held on the one-year anniversary of the Unite the Right rally in Charlottesville, Virginia, which resulted in the death of counterprotester Heather Heyer when a man drove a car into a group of people.

The National Park Service granted permits to Kessler’s rally, which he said was expected to have 100 to 400 people in attendance, as well as to counterprotest groups such as DC United Against Hate, according to the Associated Press. The Washington Post reported that Kessler’s speech was drowned out by counterprotesters. His supporters ended up numbering from 20 to 30 people, the newspaper reported.

In comparison, the New York Times reported, the counterprotesters were in the thousands. Despite the fact that police had separated the Unite the Right 2 rally and the counter-protesters, their shouts still drowned out Kessler's brief speech. "That's why I wanted to speak to President Trump at the White House," Kessler said in his speech, via USA Today. "It was criminal conduct by the Charlottesville government."

One counterprotester told the Times that as a teacher, it was important for her to be there to set an example for his students. "The idea that people were gathering in my city to spread a message of intolerance," Anjali Madan Wells, a Maryland middle school teacher, told the newspaper. "I talk to my students about standing up for what is right."

Thus far, the Washington Post reported, there have been no arrests in Washington, D.C. related to the protest and counterprotest.

The counterprotesters wanted the world to see the Unite the Right participants for what they are. International Socialists Organization D.C. chapter member Michael Shallal told the Washington Post that the counterprotesters' strength was in their numbers. "Our main message is that we want people to see Kessler and his allies for what they really are," Shallal told the newspaper. "They are not free-speech advocates for white rights but racist Nazis who want to have a nation for white people only."

On Saturday, there was another demonstration — this one much smaller — at the University of Virginia. The Daily Progress, a daily newspaper in Charlottesville, reported that the rally was originally a student demonstration to reclaim the space used last year by hundreds of white nationalists who carried Tiki torches through the campus.

The newspaper reported that the rally transformed into "an anti-police-presence protest" when strict security restrictions were placed on the participants.

Student protesters carried a banner reading, "Last year they came in torches, This year they came with badges." The Daily Progress reported that about 125 people participated in this protest.

More like this
5 Concrete Ways To Take Action Against The Rwanda Deportation Plan
By Rachel Mantock
17 Powerful Photos From March For Our Lives Protests Across The U.S.
By Michelle Toglia
The Families Of Grenfell Tower Are Still Waiting For Justice, Five Years On
By Bustle UK
How 5 People Upended Their Lives To Fight For Abortion Rights
By Hannah Smothers
Get Even More From Bustle — Sign Up For The Newsletter