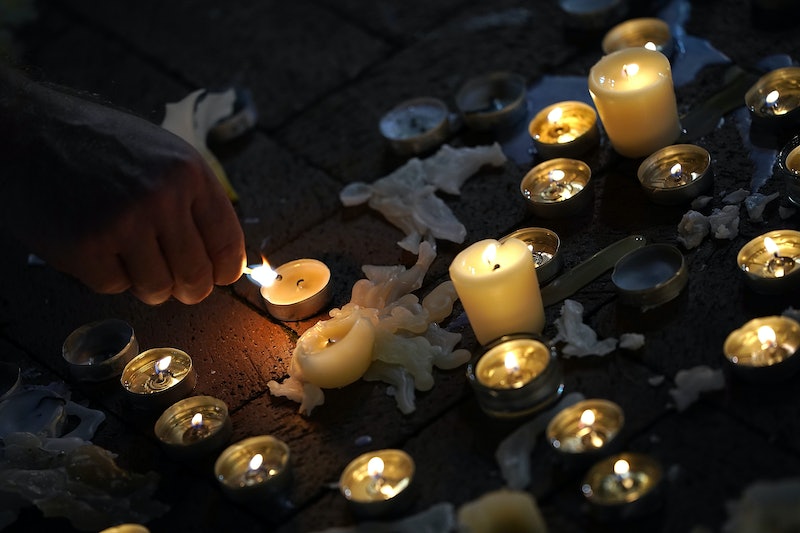 On Saturday, anti-racism counter-protesters and white nationalists clashed in Charlottesville, Virginia, where a "Unite the Right" rally was taking place. One person was killed and at least 19 injured when a car sped through a crowd of counter-protesters. The driver of the vehicle is in custody, and there are now reports that the victim of his actions has been identified. Virginia Gov. Terry McAuliffe confirmed that the Charlottesville victim is Heather Heyer, reportedly a 32-year-old local paralegal.

Bustle has reached out to the Charlottesville Police for confirmation and will update the post with their response.

It's unconfirmed whether Heyer was in Charlottesville to attend a counter-protest, but her last Facebook post read: "If you're not outraged, you're not paying attention," suggesting that she was in fact out demonstrating against hate. Many on Twitter are sharing words and messages of support for Heyer and her family, and a GoFundMe page has been established.

The GoFundMe page was organized by Felicia Venita Correa, identified as a longtime friend of Heyer's, and includes a quote, reportedly from Heyer's mother, stating "She died doing what was right. My heart is broken, but I am forever proud of her."

Al Jazeera reports that tens of thousands of dollars have already been raised for Heyer. The page mentions a goal of $20,000, which was already surpassed as of Sunday morning.

The GoFundMe page has the following message from Correa:

Heather Heyer was murdered while protesting against hate. We are raising money to give to her family for anything that they may need. The family is aware of this and is in complete charge of when and where the funds will be released. She is a Greene County native and Graduated from William Monroe High School. Her mother (whom I will not name until she is ready) said, "She died doing what was right. My heart is broken, but I am forever proud of her." She will truly be missed.

Correa is reportedly planning to hold a candlelight vigil in Heyer's honor, reportedly scheduled for Sunday, 7 p.m. at Emancipation Park.

Two Virginia State Police troopers also died on Saturday when their helicopter crashed as they patrolled the protest and counter-protest. The victims have been identified as pilot Lt. H. Jay Cullen, 48, and Trooper-Pilot Berke M.M. Bates, 40, according to CNN.

More like this
Chris Kaba's Family Continue Fight For Justice After Viewing Police Bodycam Footage
By Sophie McEvoy
These 2 Women Could Be America’s First Lesbian Governors
By Tess Garcia
Women Around The World Are Cutting Their Hair In Solidarity With Mahsa Amini
By Darshita Goyal
Who Is Nick Cannon Dating & How Many Kids Does He Have?
By Jordyn Tilchen and Radhika Menon
Get Even More From Bustle — Sign Up For The Newsletter