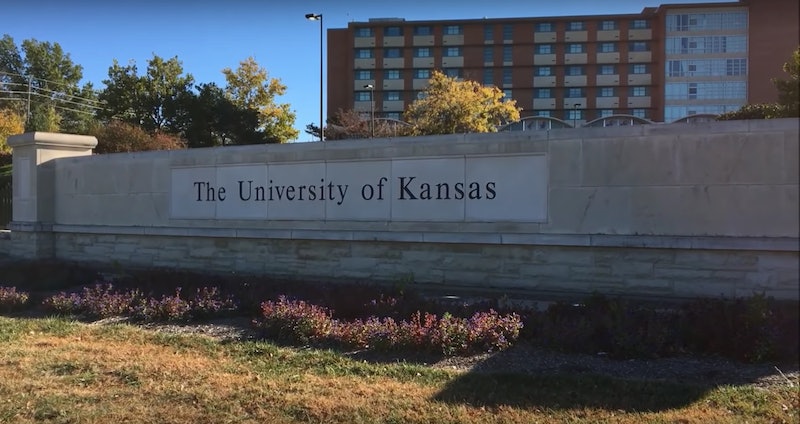 According to the Associated Press, the University of Kansas is offering an "Angry White Male" course in the fall — and at least one white male in the state isn't happy about it. Rep. Ron Estes condemned the course on Twitter, predicting that it will "divid[e] the student population" and speculating that it might violate federal law.

"Instead of a course to unite people and empower women, KU has decided to offer a class that divides the student population and could pose a Title IX violation by creating a hostile campus environment based on gender. #ksleg," Estes wrote on Twitter.

Title IX states that "no person in the United States, on the basis of sex, be excluded from participation in, be denied the benefits of, or be subjected to discrimination under any education program or activity receiving Federal financial assistance." Although the University of Kansas does receive federal assistance, nothing in the school's course catalogue suggests that any students will be excluded from participating in the Angry White Male course based on their sex or gender.

According to University of Kansas website, Angry White Male Studies will chart "the rise of the 'angry white male' in America and Britain since the 1950s, exploring the deeper sources of this emotional state while evaluating recent manifestations of male anger."

"Employing interdisciplinary perspectives this course examines how both dominant and subordinate masculinities are represented and experienced in cultures undergoing periods of rapid change connected to modernity as well as to rights-based movements of women, people of color, homosexuals and trans individuals," the course catalogue says. It will be taught by humanities professor Christopher Forth, who is himself a white male, the Associated Press reports.

A November 2018 study by The Root found that between 2013 and 2018, more white men were reported, convicted or charged with domestic terrorism crimes than Americans of all other races and genders combined. Data compiled by Mother Jones found that white men carried out the majority — 54 percent — of mass shootings in the U.S. between 1982 and 2017.

In an interview with KCTV, University of Kansas student Emily Hiegert said that Angry White Male Studies drew the attention of many of her peers at the school.

“Everyone’s just reposting it [on social media] and asking if it’s a joke or not," Hiegert told KCTV on Wednesday. "It’s just been all over the Snapchat stories, so it’s been like big news today."

Kody Ross, another student at the university, told KCTV that the school has "a lot of different classes that kind of like related to [Angry White Male Studies] that you wouldn’t think would be on college campuses."

Estes isn't the only person angry at the University of Kansas' course. USA Today reports that several Twitter users sporting avatars of white men also expressed opposition to the class, with one calling it "marxist [sic] trash."

Angry White Male Studies is being offered jointly by the school's Humanities and Women, Gender, and Sexuality Studies departments, according to the University of Kansas course catalogue.