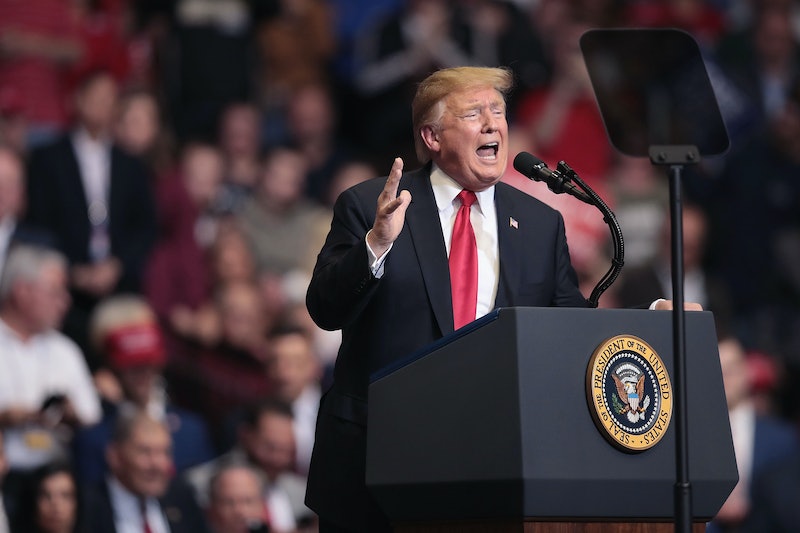 Just one day after President Donald Trump threatened to close the southern border over immigration, the State Department announced on Saturday that the United States would stop providing aid to three Central American countries. The Hill reported that Trump directed the State Department to terminate foreign assistance to El Salvador, Guatemala, and Honduras — or the "Northern Triangle," as the Trump administration often calls it.

"At the Secretary’s instruction, we are carrying out the President’s direction and ending FY 2017 and FY 2018 foreign assistance programs for the Northern Triangle," the State Department said in a statement, per USA Today. "We will be engaging Congress as part of this process."

Bustle has reached out to the White House for comment. On Wednesday, Department of Homeland Security Secretary Kirstjen Nielsen signed what she called a "historic" regional compact agreement with these three countries, CNN reported, in order to combat human trafficking and strengthen border security. But two days later, Trump accused El Salvador, Guatemala, and Honduras of having "set up" migrant caravans to the U.S., and insisted that they should no longer receive foreign aid.

"We were paying them tremendous amounts of money," Trump told reporters. "And we're not paying them anymore. Because they haven't done a thing for us. They set up these caravans."

Trump appeared to suggest that cutting off aid to these three Central American countries would decrease the number of migrants coming into the U.S. However, Univision reported that ending foreign assistance may have the opposite effect, because aid programs in all three countries actually work toward reducing migration and battling poverty.

"American aid partnerships on the ground are working to address the root causes of violence in Honduras, Guatemala, and El Salvador," according to a Central America fact sheet from the U.S. Global Leadership Coalition. "This is a moment when these countries could use additional investment and partnership from the United States to promote economic opportunity and security for their citizens, not less."

New Jersey Sen. Bob Menendez, the Senate Foreign Relations Committee's top Democrat, has also denounced the decision to cut off aid to these countries, per The Hill. He described Trump's latest move as "irresponsible," and argued that it would "undermine American interests and put our national security at risk."

"U.S. foreign assistance is not charity; it advances our strategic interests and funds initiatives that protect American citizens," Menendez said in a statement. "This latest reported move shows the Administration still does not understand that the United States cuts foreign aid to Central America at our own peril."

Although past administrations have perceived humanitarian aid to Central America as a way to reduce immigration to the U.S., this is not the first time that Trump has threatened to cut off aid to El Salvador, Honduras, and Guatemala. Before the 2018 midterm elections, Trump alleged that there was an "invasion" of migrants from these countries, and consistently attempted to warn Americans about "migrant caravans."

It wasn't until now, however, that his administration actually carried out the threat to cut off aid. But Trump appeared to break with protocol on Friday, Univision reported, when he discussed the decision with reporters before the State Department had finished informing Congress. According to Univision, the State Department is not slated to officially begin that process until Monday.