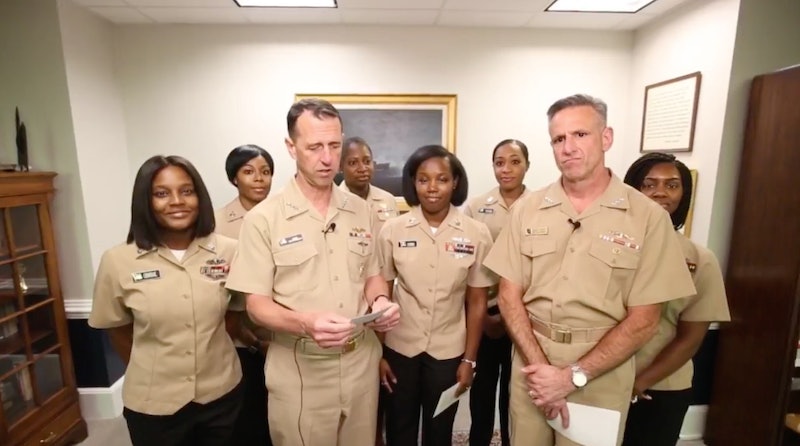 Naturalistas, prepare to have your socks knocked off. The U.S Navy's new natural hair policy is one step for the military and one super, giant, can't-believe-this-is-really-happening step for curly girls, braid lovers, and ponytail rockers.

It should come at no surprise that the Navy has a strict dress code to maintain professionalism and a uniformed appearance amongst its personnel. But the restrictive grooming standards came at the expense of women of color, having previously banned natural or protective styles like braids and locs, and even wide buns. That's all a thing of the past, now that the Navy has drastically altered their rules for how a servicewoman must wear their hair to remain in compliance with the dress code.

As reported by the AP News, servicewomen now have a variety of options for wearing their hair, many of the new changes affecting women of color most directly. The policy updates come in light of black servicewomen asking for changes to the female grooming standards that have been long overdue for a more inclusive revamp. Considering, the natural hair movement is well underway, it's about time the Navy got on board with styles that often make it easier for women of color to maintain their tresses.

The U.S. Navy took to Facebook to announce the policy updates via their CNO & CNP public all-hands broadcast. In the video, Chief of Naval Operations Adm. John Richardson and Chief of Naval Personnel Adm. Robert Burke hosted the Facebook Live event to share word on all of the changes now affecting the military branch. But one of the most revolutionary parts of the video came at the end when the two were joined by black, female members of the working group.

Kent, reported by the AP as a sailor in the Navy for nearly 26 years, has had challenges with her hair throughout her military career. She recalled to the news outlet being told to remove her braids even though her hairstyle was permitted.

“Because of the texture of my hair, it stood straight up,” Kent told AP News. “It was a very embarrassing moment that stays with you.”

The Captain was pleased to learn that her traumatic experience may no longer be a thing for female sailors of color like herself, given the CNO and CNP's recent authorization of certain natural hairstyles.

After years of feedback that the Navy make adjustments to their female grooming standards, the change has finally come. Loc hairstyles and other forms of twists are now acceptable to wear. Servicewomen may also wear buns that are "equal to the width of the back of the head", so say hello to female naval personnel rocking mega buns. Even ponytails were authorized, albeit only under circumstances that don't present occupational hazards or safety concerns.

If those updates weren't enough for natural hair triumphs, "female sailors wearing dinner dress uniforms will be allowed to wear their hair in a style that falls beneath the collar of shirts, jackets and coats." In other words, servicewomen just may start letting their glorious natural hair and styles hang free of restrictions, and it's such a refreshing change.

Adm. Burke said the changes were actually easy to implement. By listening to the working group and simply asking what recommendations would they have it they could be CNO for a day, the result was a step in the right direction for black hair magic.

“I think it’s a step forward,” she told the AP. “They’re getting more female feedback in the service, and updating what I think are somewhat antiquated guidelines that maybe no longer serve their purpose in today’s society, today’s military.”

Now that natural, black hairstyles like oversized buns and locs are now accepted in the U.S. Navy, the military is one step closer to getting the inclusive makeover it so desperately needs.