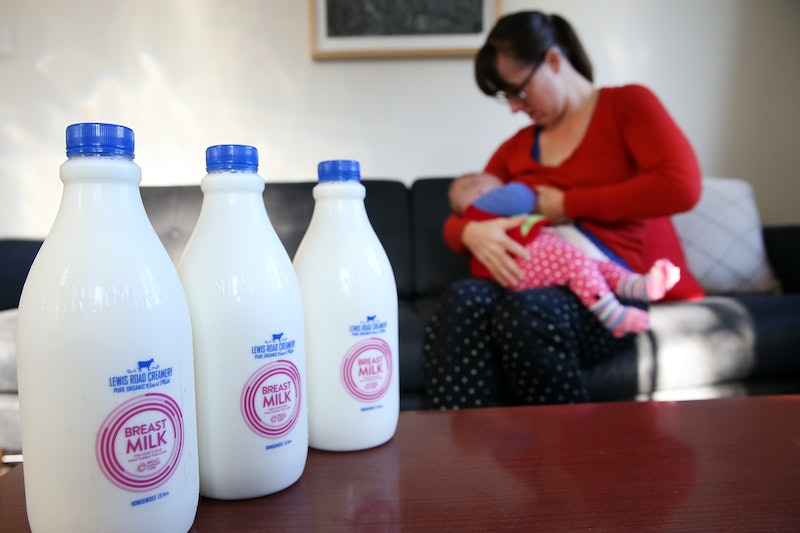 Decades of research have established that breastfeeding provides infants with crucial nutrition that formula just can't replace. Still, though, things got tense at a World Health Organization meeting when the U.S. stopped a breastfeeding resolution by threatening to withdraw military aid and impose new trade regulations.

For those reasons, it was not expected that this resolution would cause any sort of uproar — until the U.S. picked the side of the baby formula manufacturers, and then threatened Ecuador with trade restrictions and a withdrawal of military aid unless they dropped certain lines from the resolution. Specifically, the Times reported that the U.S. took issue with the sections asking governments to “protect, promote and support breastfeeding” and to limit the promotion of replacement food products.

Ecuador, which the Times reported was not in a position to weather the trading roadblocks or the loss of military aid, withdrew the resolution.

Numerous other countries then refused to introduce the resolution, all worried about consequences from the U.S. — until Russia stepped in to introduce the breast-feeding resolution. According to the Times, the U.S. did not extend the same threats to Russia as it had to Ecuador or any of the other, smaller nations that health advocates had approached as potential sponsors.

“We’re not trying to be a hero here, but we feel that it is wrong when a big country tries to push around some very small countries, especially on an issue that is really important for the rest of the world,” a Russian delegate who wished to remain anonymous told the Times.

In a statement to the Times explaining why the U.S. had attempted to block the resolution, the Department of Health and Human Services said that

The resolution as originally drafted placed unnecessary hurdles for mothers seeking to provide nutrition to their children. We recognize not all women are able to breast-feed for a variety of reasons. These women should have the choice and access to alternatives for the health of their babies, and not be stigmatized for the ways in which they are able to do so.

According to the Times, American efforts to drastically change the resolution were almost entirely unsuccessful. The one section that the U.S. did manage to get taken out was the part giving the W.H.O. license to offer technical support when countries wanted to stop “inappropriate promotion of foods for infants and young children.” Otherwise, the threats to smaller countries only succeeded to forcing the resolution's advocates to find a larger, stronger country to introduce it, which of course ended up being Russia.

The W.H.O. recognizes that there are times when breastfeeding is not an option, like when the mother has HIV or when she really cannot produce enough milk for her child after trying to do so. The resolution, however, merely recognizes the science stating that breastfeeding is always the better option when possible, in terms of both health and economics. An article published in 2016 in The Lancet, a medical journal, stated that breastfeeding could save 823,000 children and 20,000 mothers — and $300 billion worldwide. Manufacturers of baby formula, though, do have a lot to lose — and the Times reported that these were the corporate interests that the U.S. decided to side with, potentially at the expense of children's and maternal health.