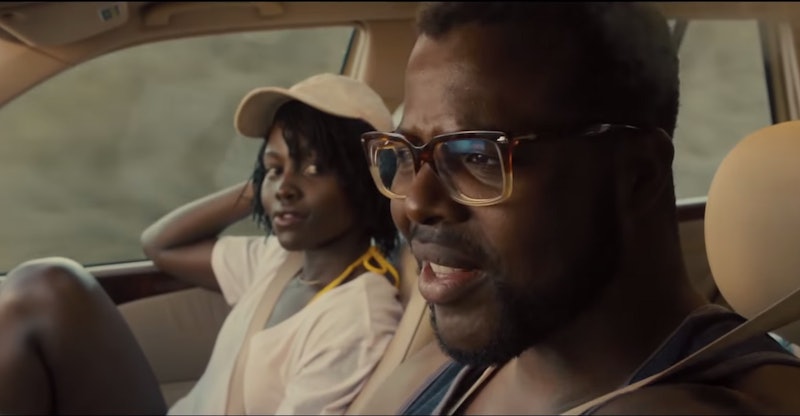 Horror fans know that lullabies, nursery rhymes, and children's songs can easily be turned on their heads and into suitably eerie tracks. There's The Evil Dead 's rendition of "Ring Around the Rosie," Nightmare on Elm Street's version of "One Two, Buckle My Shoe," Jack Nicholson's recitation of "The Three Little Pigs" in The Shining, and even the comedic (albeit politically significant) "Run Rabbit Run" in Get Out. But for filmmaker Jordan Peele's latest psychological thriller Us and its soundtrack, composer Michael Abels made some feel-good hip-hop, soul, and R&B hits into twisted tunes.

The Us soundtrack consists of a total of 35 tracks, and features not only Abels' musical score for the film, but also songs from three major artists of color: Janelle Monaé, Maya Rudolph's mother and legendary singer-songwriter Minnie Riperton, and hip-hop duo Luniz. The track that you've definitely heard in the Us teasers and trailers is Luniz's massive 1995 hit "I Got 5 On It," featuring Michael Marshall. Naturally, Abels had to turn the song into the seriously sick "Tethered Remix" to fit the movie's mood — slow and sinister. After you see Us, you'll probably never hear the original song the same way again.

It was Peele who chose the Luniz song for the movie. "I’m making a movie in Northern California, that’s a bay area hip-hop classic and I wanted to explore this very relatable journey of being a parent [and] maybe some of the songs you listened to back in the day aren’t appropriate for your kids," the filmmaker told Entertainment Weekly. "So that was one level, and another part was, I love songs that have a great feeling but also have a haunting element to them and I feel like the beat in that song has this inherent cryptic energy, almost reminiscent of the Nightmare on Elm Street soundtrack. So those were the ideas that that song hit the bullseye on for me, and also, it’s just a dope track.”

The other non-score songs on the Us complilation include "I Like That" from Janelle Monaé's Dirty Computer and the psychedelic, soulful melody of Minnie Riperton's "Les Fleur." As seen on the full track list, neither of the two songs have been remixed by Abels, so it will be interesting to see how they play into the movie. While you can stream the soundtrack on Spotify, Amazon, and Apple Music, those two tracks and the original "I Got 5 On It" are only on the physical album.

Most of the album consists of Abels's creepy score. In one track, the composer riffs on R&B group Club Nouveau’s “Why You Treat Me So Bad?,” which is sampled on the original "I Got 5 On It." On the Us album, the track is called "Pas de Deux," and is the second song on the record. It slows down the familiar beat, adds the ever-essential violins, and more suspenseful sounds for a truly horrific effect.

But the composer came into the gig aware that horror fans are tuned into how music can tease a big moment. "There are times you want to foreshadow what’s coming and other times you want to deliberately not foreshadow what’s coming,” Abels told Entertainment Weekly about his decisions with the score. “Some scares are the type of dread where you know it’s coming, and others aren’t. So we do spend a lot of time talking about what kind of scare something’s going to be, whether it’s a jump-at-you, or a slow burn.”

There are also compositions like "Immolation" and "Human" that also feature vocalists singing at the forefront, and rising above the melodies. Abels also told EW, "Jordan specifically, when we first spoke about the film, talked about how important he wanted the voices to be in the soundtrack."

Whether or not horror movies are your cup of tea, you can still listen to these tracks just to hear Abels' brilliant work. Although, after watching the movie, it's understandable if you'd prefer not to relive the spine-chilling scenes — at least when you're alone.