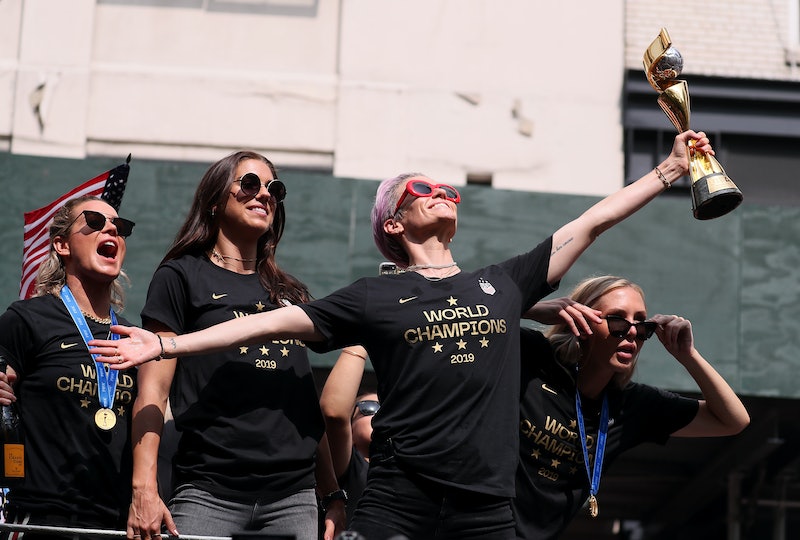 Now this is how you celebrate a major win and educate others about gender equality. The U.S. women's soccer team's equal pay lawsuit was used as confetti during their World Cup ticker-tape parade in New York City on July 10. That's right, the federal lawsuit they filed in March against U.S. Soccer citing "institutional gender discrimination" literally scattered the trees and the ground of the Big Apple.

On Wednesday, U.S Women's National Team member Ashlyn Harris posted a video on her Instagram Story showing the lawsuit turned into confetti. While crumpling a piece of the lawsuit in her hand, Harris declared in the video, "Our lawsuit — in the f*ckin trees, b*tch!" She also captioned her story, "Pay Us..." You can watch the video below, which was tweeted by FanSided.com's Editorial Director, Josh Hill.

The parade, of course, honored the USWNT for their World Cup win on July 7 after they beat the Netherlands. This earned them their fourth World Cup title. However, the event was so much more than recognizing the professional soccer team as winners. The celebration also highlighted their fight for gender equality, specifically equal pay for women in the workplace.

As previously stated, the U.S. women's soccer team sued the national soccer organization in early March in an attempt to finally receive the same earnings as the U.S. men's soccer team. The women's team makes significantly less than the men's team. The current lawsuit came three years after 28 members of the USWNT, including, Megan Rapinoe, Alex Morgan, Carli Lloyd, and Becky Sauerbrunn, filed a discrimination charge with the Equal Employment Opportunity Commission, per a March 2016 NPR report.

In May, U.S. Soccer denied the allegations from the current lawsuit and stated in a response filed in federal court (via ABC News), "U.S. Soccer's challenged pay practices are not based on sex." The statement continued that "any alleged pay differential" is due to "differences in the aggregate revenue generated by the different teams," among other factors.

On June 21, the WSJ reported that the U.S. women's soccer team agreed to mediation for the equal pay lawsuit. Molly Levinson, a spokesperson for the players involved in the lawsuit, said in a statement shared by the WSJ,

"In the midst of the World Cup, following news regarding significant revenue generated by the women players, USSF decided it is time to sit down with the players' lawyers. We hope their pledge to submit a proposal to solve the ongoing gender disparities is genuine. It would be truly remarkable for these games to mark the beginning of pay equity. The world is watching."

So, as support for not only just the USWNT, but for women everywhere, their lawsuit became confetti. Reuters reported on Wednesday that it's rare to see actual ticker tape (strips of paper) at a ticker-tape parade anymore.

However, that all changed during the parade for the U.S. women's soccer team. According to Twitter user Irene Kontje, New York City-based also lawyers got in on the action. Kontje tweeted next to a photo of a page from a law book's listing of the Equal Pay Act, "At the #USWNTParade #TickerTapeParade enterprising lawyers in the Woolworth Building threw confetti, toilet paper and whole pages from old law books. This one landed at my feet."

As for other fans supporting the U.S. women's soccer team, they are loving how their equal pay lawsuit was used as confetti. Here are just a few of the tweets:

The Right Kind Of "BDE"

The team isn't backing down or staying quiet.

The Obsession Is Real

Who else can't get enough of them?

Multitasking At Its Finest

It doesn't get better than this.

Equality Confetti Is The Best

This is the only confetti that matters.

The U.S. women's soccer team will forever be remembered for their many wins and earning titles, that's for sure. They'll also go down in history not only for having powerful athletes who stand up for what they believe in, but who brilliantly transformed their equal pay lawsuit into confetti. Now that's talent.

More like this
The 2023 Super Bowl Commercials Feature A 'Breaking Bad' Reunion & Missy Elliott
By Alyssa Lapid
David Beckham’s Controversial Qatar Deal Skyrocketed His Net Worth
By Catharina Cheung
'Breaking Bad' Duo Walt & Jesse Are Back — In This Super Bowl Commercial
By Jake Viswanath
'The Queen’s Gambit' Season 2 Tweet Wasn’t From Anya Taylor-Joy
By Mary Kate McGrath, Jack Irvin and Grace Wehniainen
Get Even More From Bustle — Sign Up For The Newsletter
From hair trends to relationship advice, our daily newsletter has everything you need to sound like a person who’s on TikTok, even if you aren’t.