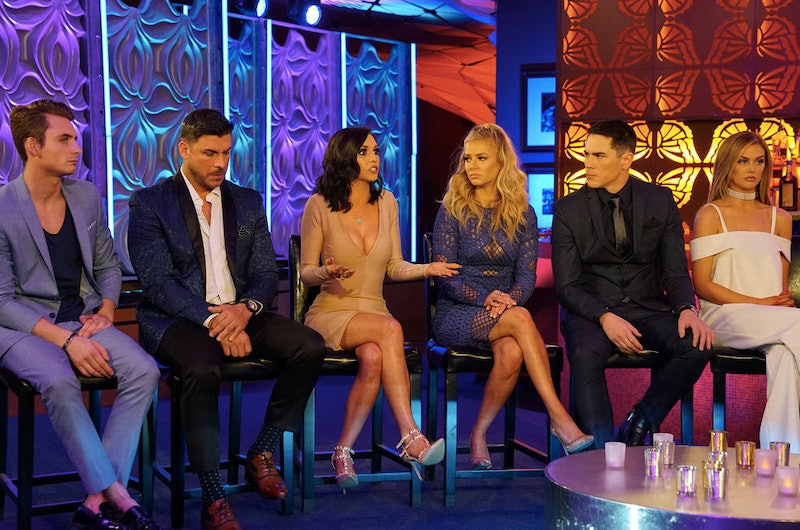 When Vanderpump Rules started out, the cast vacations (usually for Stassi Schroeder's birthday) were nothing short of iconic. But in the more recent seasons, there has been way too much divisive clique drama, so the cast has taken separate trips instead. (Aside from Katie Maloney and Tom Schwartz's wedding events, but even then not everyone was invited.) Sure, the episodes with the split trips were entertaining, but it just wasn't the same as the good old days. It actually seems like there is hope for the next season, though, since the entire Vanderpump Rules cast went on vacation in Mexico together.

Yes, that's right. All of the enemies, frenemies, exes, and everyone in between went on one trip together. This will most likely be a multi-part episode with a lot of drunken drama, because how could it not be? Unfortunately for fans, it's going to be at least a few more months until the new Pump Rules season airs, so no one will know exactly what went down until then.

Thankfully, the Pump Rules cast is all about social media and they've blessed the fandom with a sneak peek at the vacation antics by posting a bunch of photos from the trip.

1. The Original Cast Members Posing For A Photo

So much has changed since Vanderpump Rules first started, but it's nice to see all of the originals in one photo.

2. Hanging Out As A Cast

Yes, Kristen and Ariana are sitting next to each other and smiling.

3. Forming A Truce Thanks To Tequila

Well, there's probably a lot more that went into these three posing for a photo together than taking tequila shots, but I'm sure the tequila only helped.

Props to Stassi, Kristen, and LaLa for turning such a controversial topic into a joke.

6. The Witches Of WeHo Sticking Together

Of course the self-proclaimed "Witches of WeHo" took pics together in Mexico. They've been on pretty solid ground ever since Stassi came back into the fold two seasons ago, but then again, you never know what happened before or after this photo.

Everyone loves Brittany, so it's never surprising to her hanging out with anyone from the cast.

The mask is hiding whatever facial expression Kristen is making, but it seems like she is having a good time.

LaLa and Scheana are definitely on the same page with their coordinating buns and pouty lips.

This friendship will always be intriguing. Jax's ex-girlfriend hanging with his current girlfriend is just the epitome of this show.

Never saw this one coming, but it will be interesting to see how it all plays out.

13. Sipping On A Daiquiri

Almost anyone would love to switch places with Katie in this photo.

If pretending to be cats in a photo isn't a sign of peace, then what is?

15. Brittany Turning Into A Bird Whisperer

How does Brittany get even cuter? Just give her two parrots to hang out with.

Even James was included for this cast trip! Times really are changing.

If only we all could have gone on this vacation.

These two were probably pumped to be included in the group trip this time around.

19. LaLa Modeling On The Beach

These three rocked their shades and some silly faces by the water.

21. Sandoval & Taking A Break In Between Golf Rounds

After all they've been through, it's nice to see that James and Sandoval are still boys.

As great as the cast antics are in West Hollywood, every person going to Mexico is bound to amp up the intensity of the drama. I cannot wait for these episodes to air.