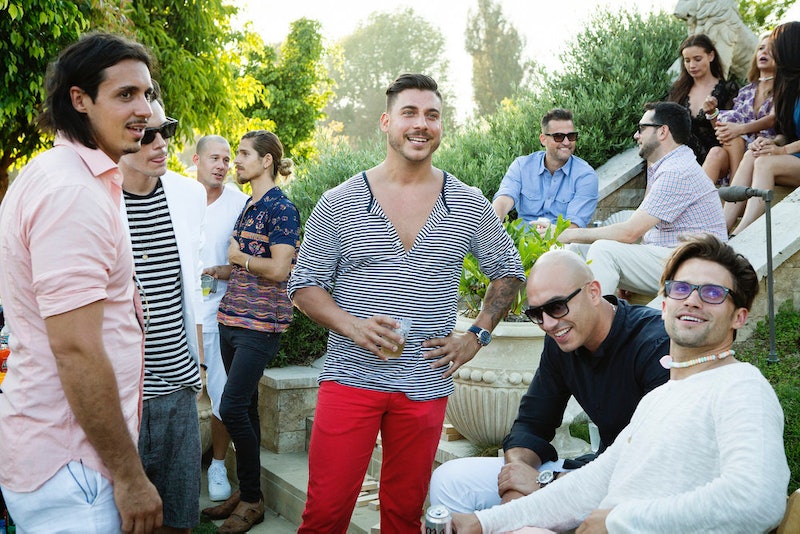 After four seasons, there's not much we don't know about the cast of Vanderpump Rules, from their many romantic entanglements to who has the most grammatically correct tweets. But there is still one big question hanging over the show. Does the Vanderpump Rules cast pay for their vacations? Every few episodes, it seems like the cast is on their way to another exciting location, from Hawaii to Las Vegas (which is never a good idea, by the way, since every single Vegas trip has led to some kind of disaster), with sometimes as many as four or five trips per season.

Given that the VR cast reportedly does not make a lot of money, according to TMZ, fans may wonder if they're footing the entire bill. A Bravo representative declined to comment on whether the network pays for the trips seen on Vanderpump Rules. Traveling is great, but these guys still need to work at the restaurant in order to make ends meet, in addition to their salaries for appearing on the show. And TMZ's article even claimed that the cast was upset about Bravo sending them on these trips in coach. In a video recap of Real Housewives of New York, former star Alex McCord also claimed that Bravo vacations were planned by producers for RHONY. But in the case of Vanderpump Rules specifically, the network has not confirmed who exactly pays for the trips seen on the series.

However, the cast also travels frequently when Vanderpump Rules isn't filming, so they're definitely willing to embark on their own vacations.

She doesn't credit where she traveled, so this might be a trip to the zoo, but it's still a great picture.

Tom goes to a lot of concerts when he's in LA, but he also takes time to travel home in order to catch music from the St. Louis Orchestra.

Scheana Jets All Around Europe With Shay

And they're taking cute photos all the way.

Kristen & Katie Roll Into NYC With The Crew

The original Season 1 crew reunited in New York in order to tape an appearance on Watch What Happens Live. But they also hung out in the city for a few days, so it kind of counts as a trip (even though, as a promotional appearance, it's possible that Bravo covered their expenses).

James Travels With His Girlfriend

Looks like James has found a girlfriend who looks as good as he does when taking a selfie while on vacation in a national park.

Oh, the places they'll go indeed. This cast is all over the place.

Maybe this shouldn't count because he was in Hawaii for a court date about that pair of stolen sunglasses from his birthday trip, but Jax and his girlfriend Brittany decided to make the most of the occasion and take a romantic detour on the same trip.

Whether Bravo funds the many trips of the Vanderpump Rules stars or they're just savvy enough to figure out cheap deals on airfare and hotels, this cast remains well-traveled year-round.

More like this
All The Clues Kaity & Zach Are Together After ‘The Bachelor’
By Grace Wehniainen
Rachel Responded To 'Bachelor' Fan Theories About Her TikTok With Clayton
By Grace Wehniainen
Erika Jayne's Estranged Husband Tom Girardi Has Been Indicted On Fraud Charges
By Jake Viswanath
Everything To Know About A Potential 'RHODubai' Season 2
By Kadin Burnett and Brad Witter
Get Even More From Bustle — Sign Up For The Newsletter
From hair trends to relationship advice, our daily newsletter has everything you need to sound like a person who’s on TikTok, even if you aren’t.