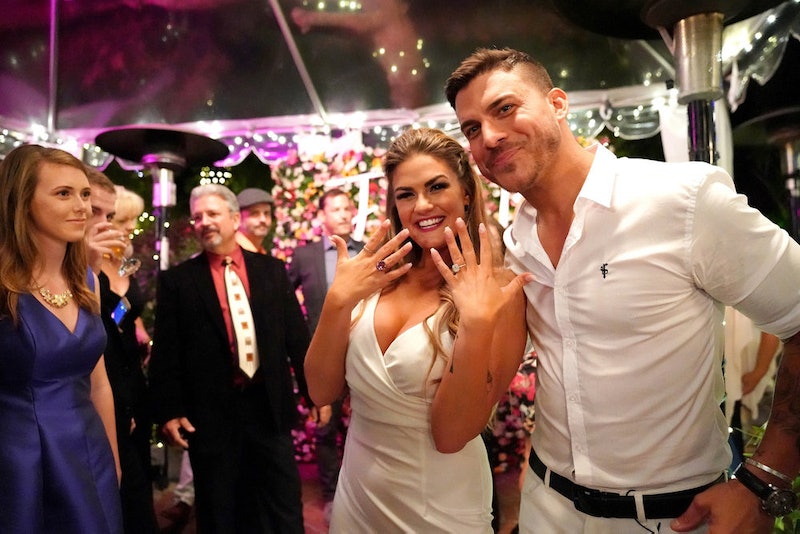 Another year, another season's worth of employee shenanigans for Lisa Vanderpump to put up with. The Vanderpump Rules Season 8 trailer is here, and it's packed with drama, courtesy of new faces and old friends alike. Unexpected feuds heat up, relationships are damaged, and the event of the season, Jax Taylor and Brittany Cartwright's wedding, finally gets underway.

The trailer, released on Thursday, Nov. 7, gives viewers their first look at Jax and Brittany's highly anticipated nuptials — in the form of Brittany, in her wedding dress and tiara, plopping her head down on a pizza box. It's not about the pasta — it's about the pizza (box). And with Jax's behavior threatening his longtime friendships, the wedding drama is only sure to intensify. Is anyone surprised at Jax possibly becoming a groomzilla?

Vanderpump, the show's matriarch, has her hands full between her two new restaurants, having to handle drama from her trusty employees, and the new kids in town. "I don't even know where to start," Vanderpump says in the trailer. "Suddenly everything kind of turned upside down. It's great to have new faces, but their problems seem as complicated as their predecessors."

But while her love life might be going smoothly, other aspects of her personal life aren't as secure. It looks like Stassi's feud with Kristen will be a real sticking point this season. “You can’t be real for one second, Kristen," Stassi snipes in the trailer. The Witches of WeHo might be coming to an end.

When the new season of Vanderpump Rules finally premieres on Tuesday, Jan. 7, it will also welcome new staff/cast members. Brett Caprioni, Charli Burnett, Danica Dow, Dayna Kathan, Max Boyens, and James' girlfriend, Raquel Leviss, are all joining the cast. And they'll be operating under the watchful eye of Scheana, so fans know it's going to get dirty.

More like this
Everything To Know About 'RHONY' Season 14
By Jake Viswanath, Alyssa Lapid and Brad Witter
Erika Jayne's Estranged Husband Tom Girardi Has Been Indicted On Fraud Charges
By Jake Viswanath
'RHOSLC’s Heather & Whitney Are Still On A “Friendship Break” After Season 3 Reunion
By Jake Viswanath
RHOP’s Robyn Dixon Explained Why Juan Paid For Another Woman's Hotel Room
By Brad Witter
Get Even More From Bustle — Sign Up For The Newsletter
From hair trends to relationship advice, our daily newsletter has everything you need to sound like a person who’s on TikTok, even if you aren’t.